At last some rain, two days or more of continuous rain this week. Hurrah! The Prop under whose 'umbrella' we gather on Saturdays, has some lovely plants, so do go and have a look.
With a couple of days inside I still managed to get some jobs relative to the garden done: sharpening secateurs, and cleaning all my old labels ready to use again.  There was a time I could remember the names of all my plants, where they were planted and when.  Those days have past, so labels are necessary.  I have also made a plan to write labels for all the plants that I wish to give away.
(1) One of the plans, a few weeks ago, was to rationalise the number of plants I need to take in, in the autumn, as well as the number of plants in pots.  Rather than face that dilemma in October, I decided to repot the majority and offer the plants on our gardening club Facebook page.  I had two succulent enthusiasts call around, and with all social distancing rules adhered to, there were two very happy gardeners.  It was great to meet up with two fellow club members, and to send plants to good homes.  Two really beautiful Aeonium Velours went, and now I have just this one, newly potted.  Many other succulents  also flew the coop and I have just one or maybe two of each cultivar remaining, for myself, but just one of these lovely aeoniums, since I have plenty of material to propagate again should I wish to. 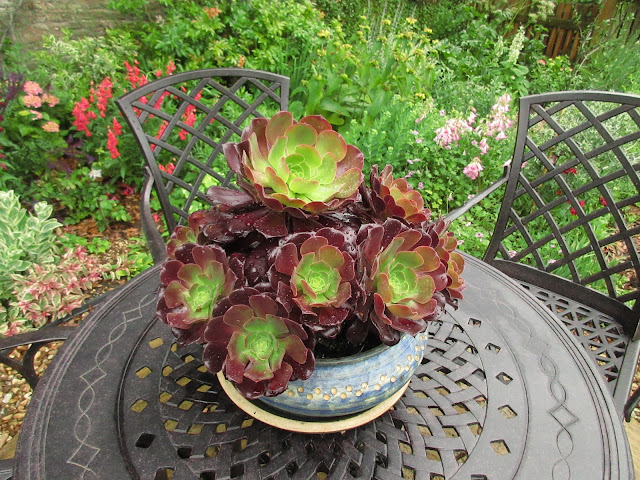 (2) The Penstemons have begun flowering and are doing very well following a severe cut down in March.  This is a pass along from Val my neighbour. It looks a little like King George V. 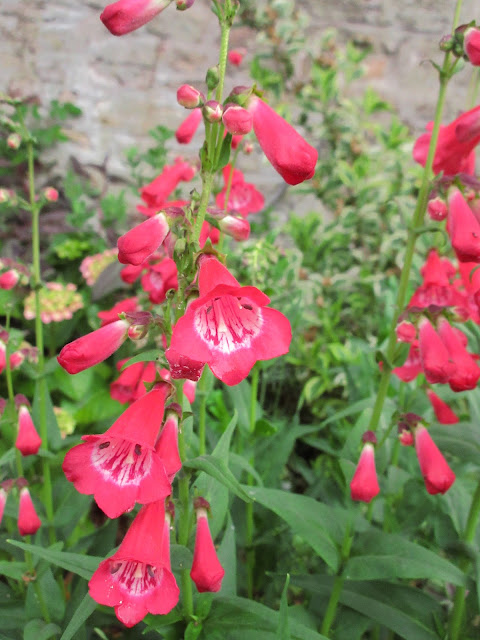 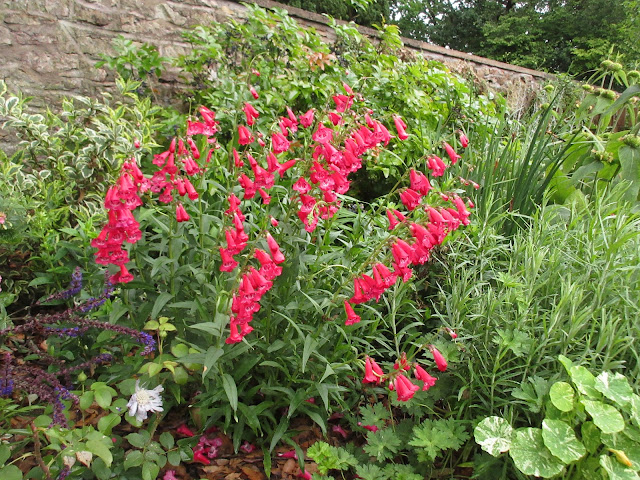 (3) As soon as the rain eased off yesterday, I just had to get out into the garden.  Some of the lemon verbena: Aloysia citrodora, was harvested, ready to dry for my winter supply of teas.  Not surprisingly, a few cuttings were taken. As he inside was not looking, the bench doubled up as work bench, and when I was finished, everything wiped down and put away. He doesn't mind really, but I am a messy person, doing several things at the same time.  Another thing I ought to work on! 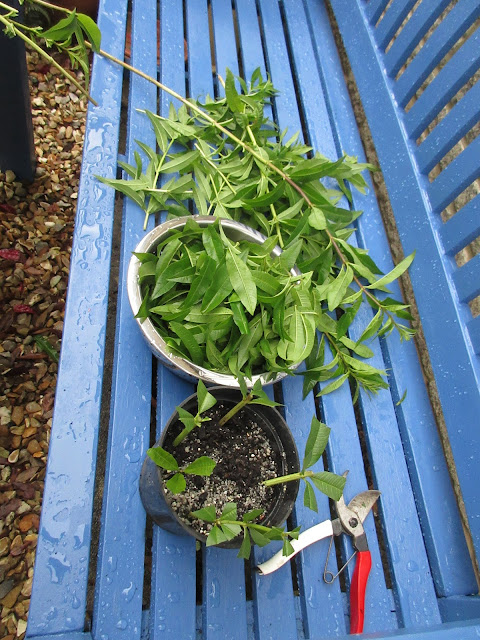 (4) Growing a few veg: Once upon a time,  I spent hours at my allotment.  I still like to have a little corner to pop out to, with herbs and a few other small patches of edibles.  I had sown a few peas to harvest as pea shoots, and after nipping a few ends, the plants ended up in the 'potager', size in opposite relation to the grandness of the title. I have picked a surprising number of peas, which end up playing a prominent role in canapes, risottos, etc. Something I wouldn't do with the very good ones that come frozen.
Here the first garden peas star on some bruchetta; we had one each. One chicken liver slice and fried in butter, topped with 'verdure' from the potager,  deglazed  with brandy which had been used to soak dried cherries, on a small slice of home made sourdough.  I bought a lovely organic chicken from a local artisan producer at the market on the first day opening after over 12 weeks, and it came with all the innards, just as they used to come years ago. 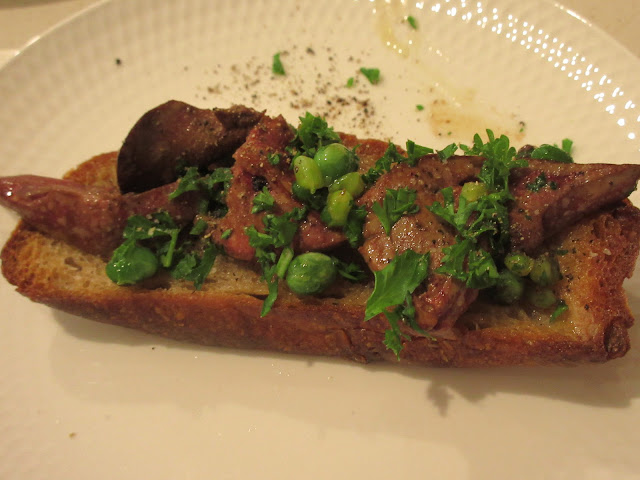 Next year, I shall grow some mangetout.... 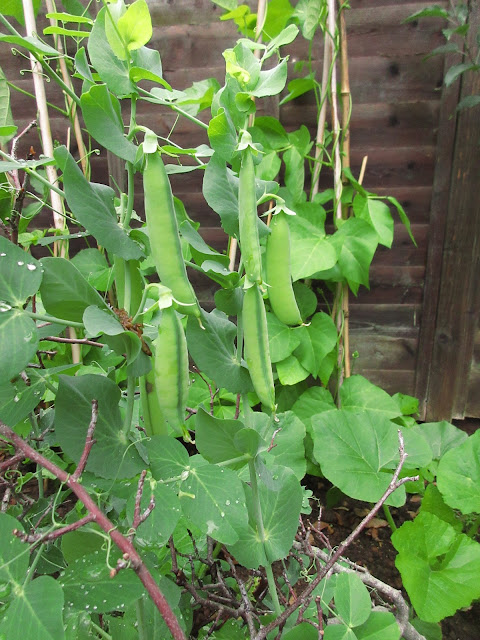 The lemon verbena which grows slap in the middle of the potager, will be moved at the end of the summer, as I hope this way to make a little more room for veggies.  The cuttings are an insurance in case it hates the move, and keels over.
(5) Things can get a little out of hand, or out of proportion.  Is there such a thing as giant fennel, growing to over 2 metres?  It did look cute with delicious feathery leaves which were chopped up for salads only a few weeks ago, but was it the sunshine, or is it trying to have a look over the next door fence, or the other way to the levels?  Next year I'll try Florence fennel, and buy my fennel seeds from the grocers! 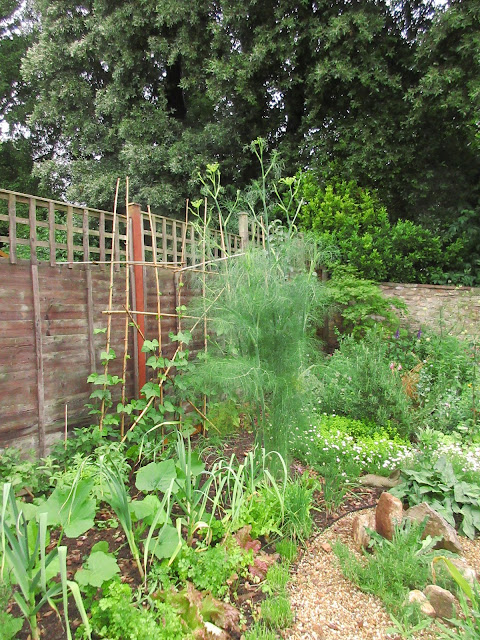 (6)  Just how many spots and which way round?  Or stripes? Lots of two spotted and other ladybirds in the garden as well, which is why I am holding off dealing with the black and greenfly for now. 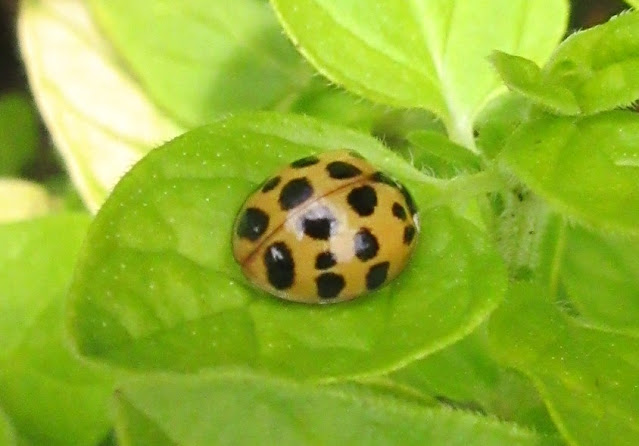 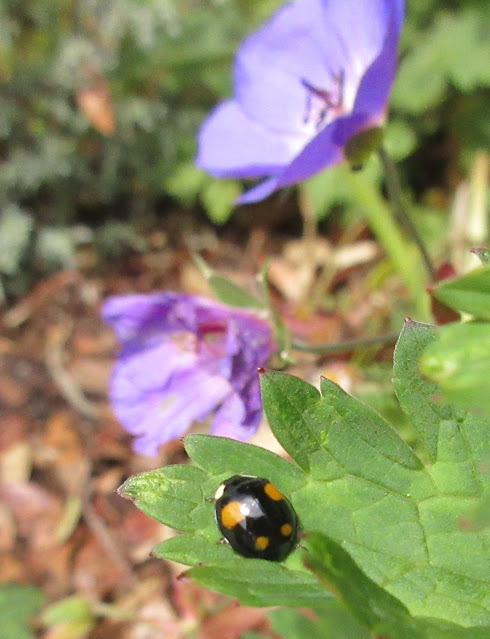 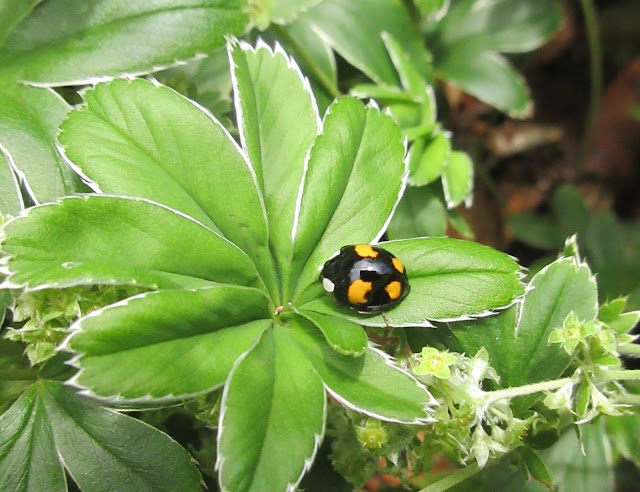 Let me also mention the larger animal with stripes, whose appearance made our wedding anniversary completely memorable.   After never having seen a badger alive, one day this week I saw one run in broad daylight just the other side of the wall, and on the following evening, as we were finishing off our special meal, one came in the garden, drinking from the bird bath on the ground.  I had wondered why and how the freshly filled bowls, were nearly empty and pretty grimy every morning.  I now surmise that it was not from all the early birds having their morning wash, but that the badger had been desperate for water during the dry spell.  I reacted quickly, and did not want to waste time taking a picture,  and shooed it off,.  The bird bath won't be left on the floor overnight again!  A quick sighting is fine, I would rather my garden remain a haven for frogs, slow worms, and grass snakes.  After cutting Mr S's hair yesterday, I scattered the clippings along the boundary, I hope the smell of humans may deter it.
Posted by Stasher at 09:32