In a Vase on Monday - Are nasturtiums the new orchids?

Now that orchids are easy to obtain and grow, can be bought as cut flowers, could they be said to have lost their cachet? May I propose that today nasturtiums could be the new orchids!  Sometime tricky to grow, can be threaten by insects, are so delicate, that if you have them delivered, it would have to be by a special courier almost holding the flowers, not in a box etc. and probably only good for a day or two.  Now that is luxury!

I'm sure that Cathy who hosts this meme and others joining in will have similar garden grown treasurers, sometimes with accompanying additions. If you are taken by Cathy's cake menu then I too am serving a Coconut and Lime cake when I have visitors to the garden tomorrow. Here is a link to a good recipe. 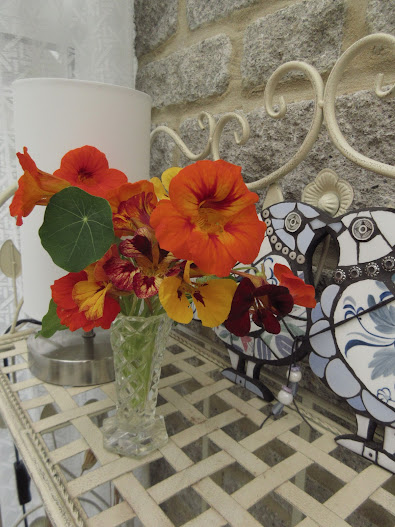 Suggesting that nasturtium could be the new orchids was a bit cheeky, and said a little tongue in cheek.  Yesterday I read a headline.  I ought to have read the whole article at the time, but thought I would be able to get back to it.  That is the problem with on line newspapers rather than the hard copies which one can fold back and keep for later. I failed to read the article and it has been like a worm in my brain.  The title was 'Are peas the new Caviar?' I can't find the article to read, but having googled it I came across an old article in The Suffolk New written by Nicola Miller in 2016.

"If you travel to the Basque region between March and June, it is likely that you will meet food-lovers making a special pilgrimage of their own, and not for religious reasons either, but to eat the tiny tear-shaped peas that are harvested from farms which line El Camino de Santiago.

The peas are prized by chefs based in the popular pintxos bars which line the streets of San Sebastian. Known as guisante lágrima in Spain, these peas sell at up to £250 a pound because they are harvested and shelled by hand and their delicate flavour is a result of the farm’s proximity to the sea which imbues the air and soil with a subtle salinity. It can take nearly twenty pounds of pods to produce one pound of shelled peas, earning them the local name of vegetable caviar."

Yes I am growing peas and mangetout this year, in my very small vegetable plot, and each little morsel has formed the basis of some creative cooking, and also often used just as garnishing sometimes with a nasturtium leaf and flower.

On the book front, I am close to finishing another excellent book, from our Wells WI Bookclub called "The Nightingale" by Kristin Hannah. 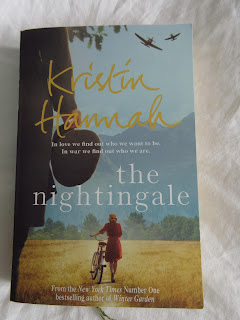 Sometimes the American spellings, and non period correct words jumped out at me, but on the whole a great read.  There is a scene in which a secret message was smuggled in a bouquet, and the descriptions of lack of food, far worse than the rationing my mother described to me, makes one appreciate the simplest of food such as peas...

When we met to discuss the book, I had only read a couple of chapters, and it is certainly a book I really wanted to continue with.  What made the book particularly poignant is that recently one of the members of the group had been going through her mother's memoirs of their escape from German occupied France leaving behind absolutely everything except what their car with several adults and children could carry,  and consequently lost everything that their luxurious life had to offer. I was also very privileged to be given a copy of these memoires, and have seen a few of the precious photographs handed down through a couple of generations.

Labels: Books, In a Vase on Monday