When I decided to catch up on my back list of bakes, the recipe from Jane Mason's book caught my eye.  Its nearly two years since our holiday to Norway, and I remember very well having a break in a beautiful traditional house in Stavenger where we had coffee and a delicious yeasted treat. 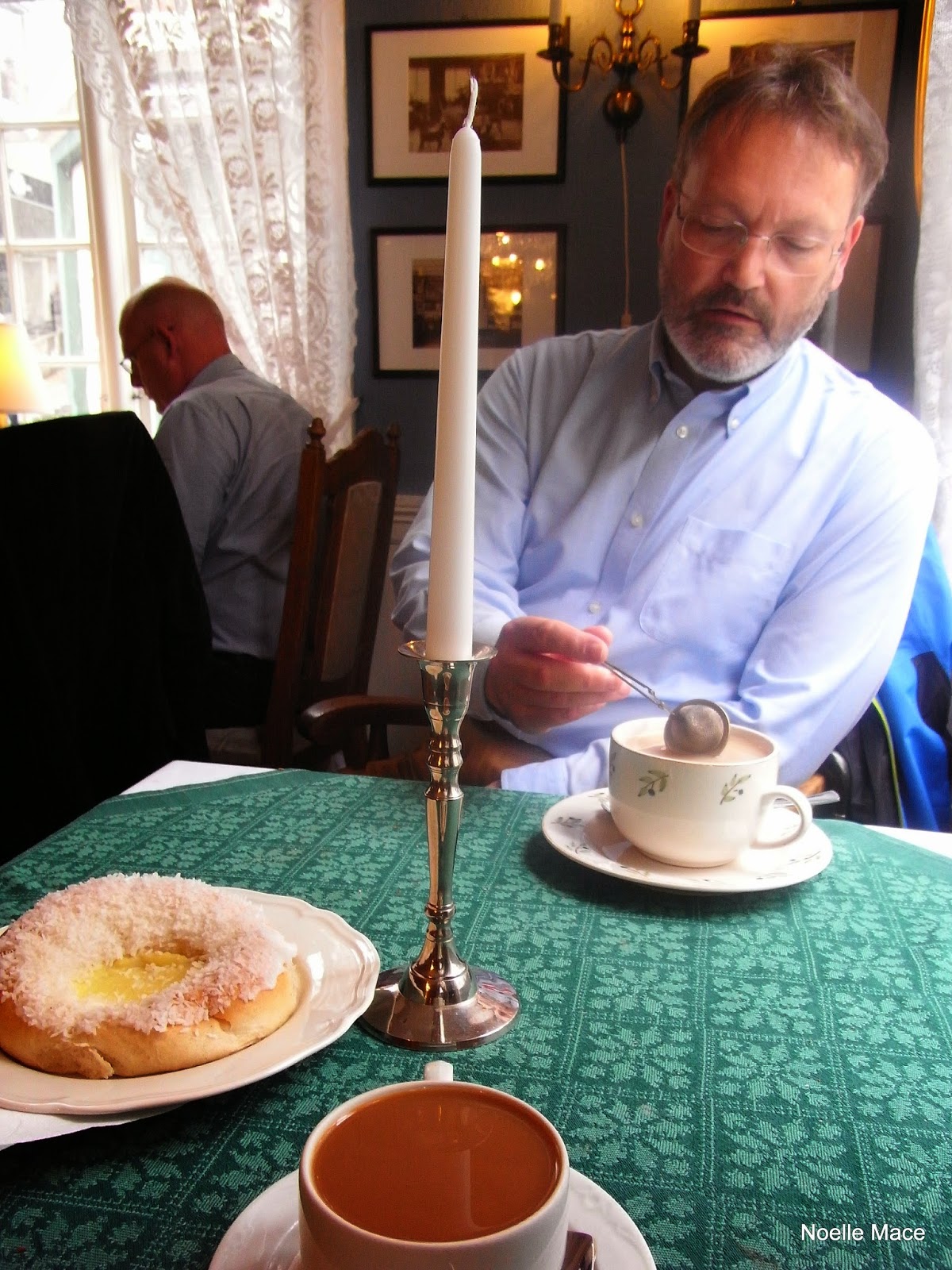 I have just read that these are called Norwegian Custard Buns, and have found pictures and recipes for these, so will have to try them soon.

Skillingsboller, boller is Norwegian for bun, is a little different both in construction and flavourings.  As it was Sunday and I was determined not to go to the shops, I realised that I would even have to make my own flaked almonds from whole almonds with skins on.  Its a little fiddly, and next time I make these I would definitely have some flaked almonds in the cupboard ready.

By creaming up the sugar, spices and butter with the hand mixer till soft and fluffy, it made it much easier to spread the mixture on the dough which at 60 x 30 cm took up a fair proportion of my kneading surface.  Mr S normally does not like cinnamon, but I do, and for the sake of the challenge did not want to substitute this for something else on this occasion. 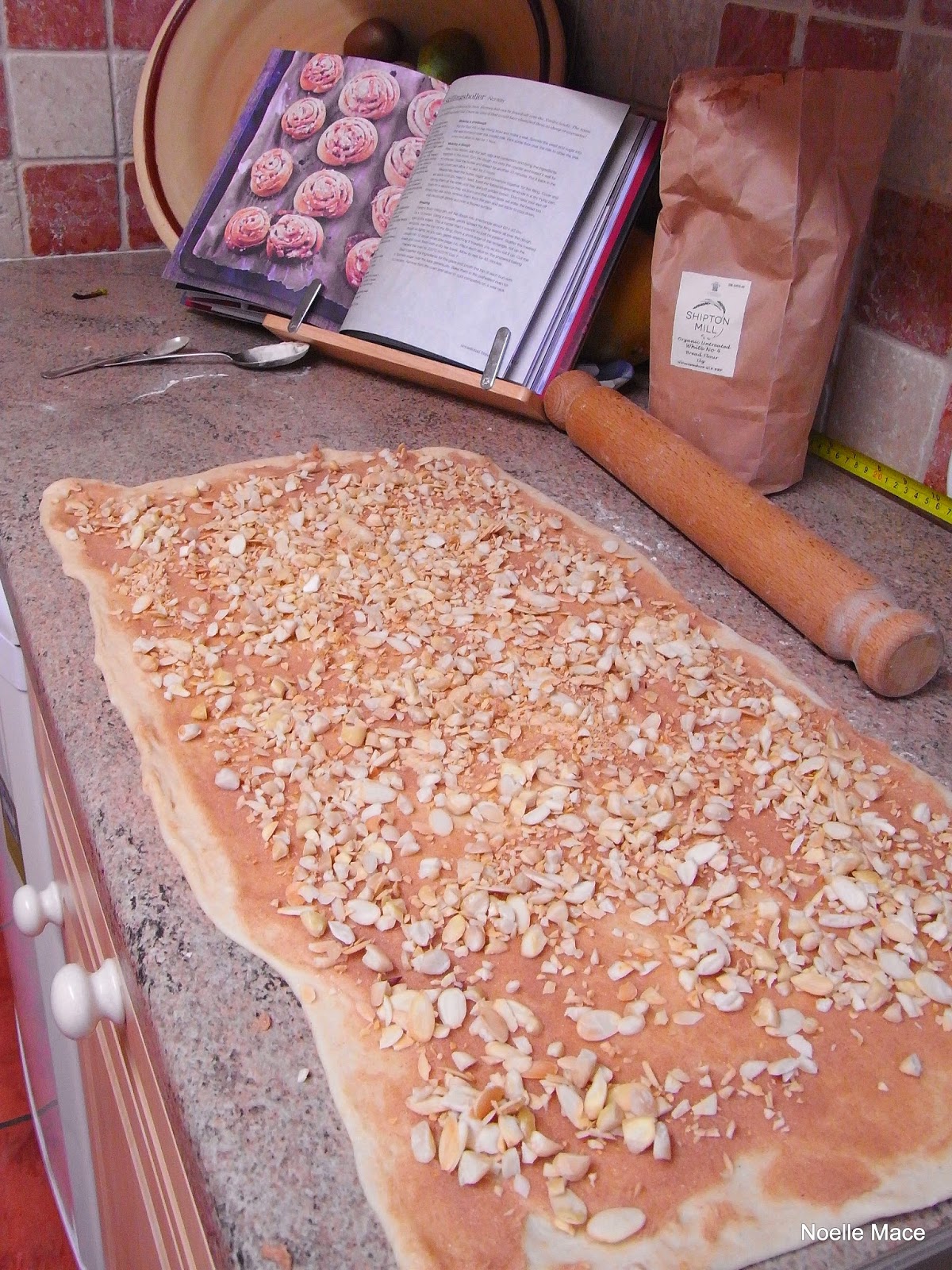 Because you roll up the dough from the narrow end, you end up with lots of swirls... 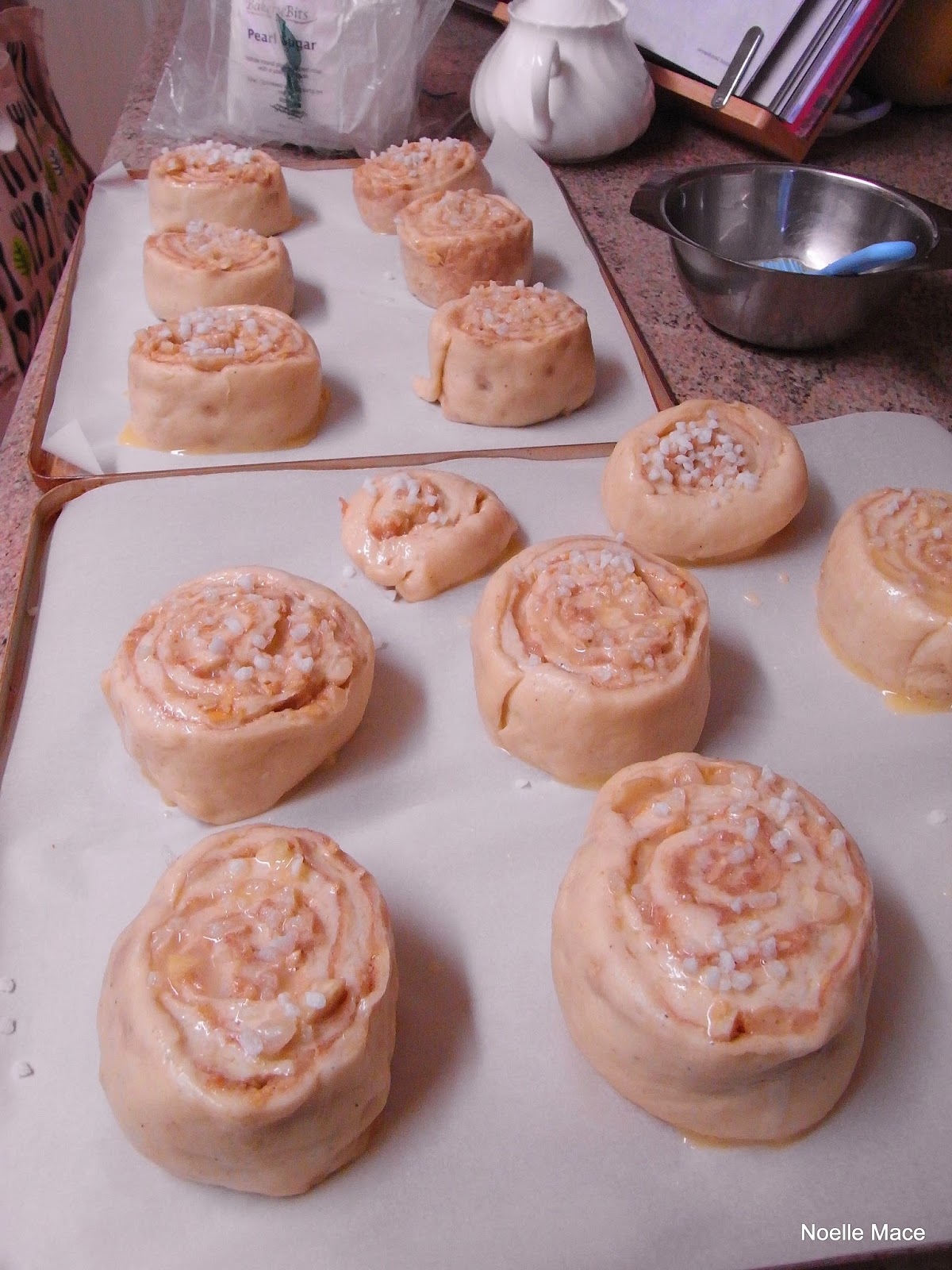 After the last rest, they were brushed with glaze and had sugar nibs liberally sprinkled on top.  The two small ones are the ends of the long roll trimmed off...which being smaller, cool much faster, and are the baker's treat!

By this time with the drear weather outside, and the warm spicy smells in the house, tea time was being looked forward to. 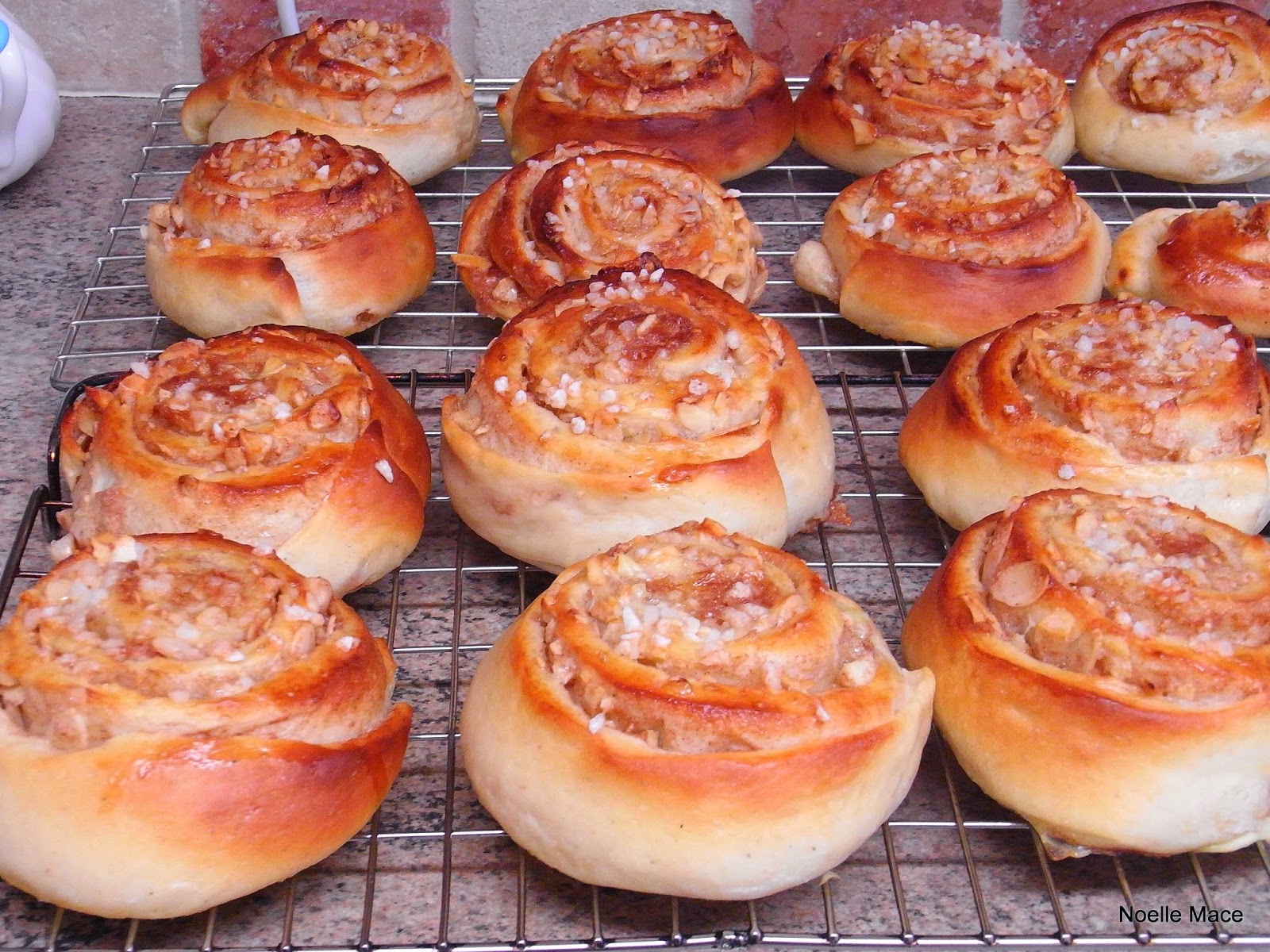 I just had to have my weekly cup of tea...with this beauty. 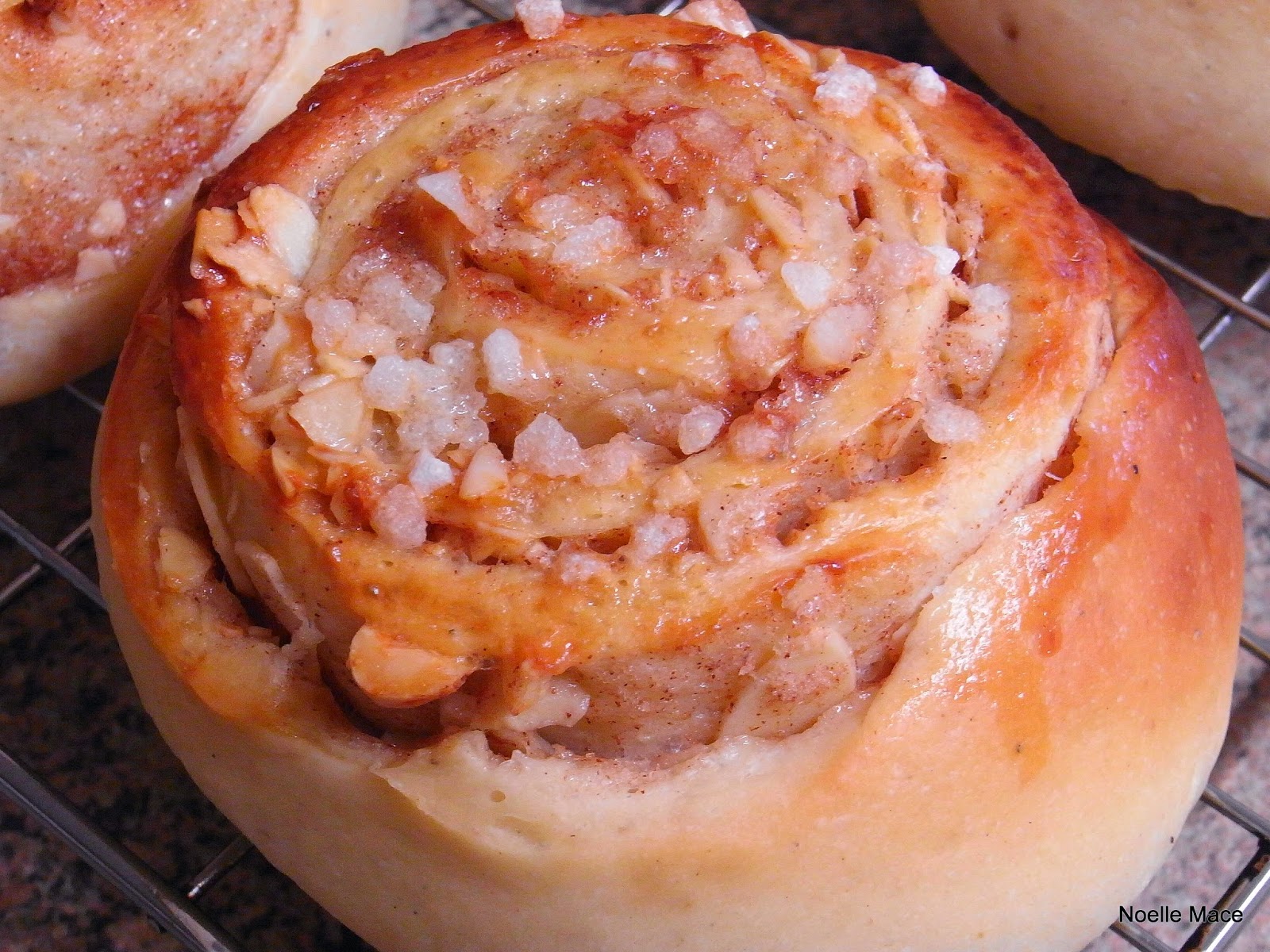 And Mr S pronounced it delicious even after I confirmed there was cinnamon in the bun.  I think it is the balance with the cardamom in the dough, and the toasted almonds together with the slow rise, which make these buns a really delicious tea time treat.  I took one round for my friend Lita, who turned down coming round for after noon tea with us, as she was busy filling out job applications.
Posted by Stasher at 13:16