This weekly post is linking in with The Propagator who gathers a few similarly enthusiatic plant and gardening bods.  I spied a good close up of a thorny stem for example.

My answer to planting more trees this week, as we are all being urged to do, has been to plant fruit trees in the garden.  I love fruit trees on several counts, visually at blossom time as bees visit and pollinate fruit when it also gives me the hope for fruit later in the season.  Last week I was inspired by another Six on Saturday contributor and finalised my choice of trees which I had been pondering throughout the summer.

I poured through the online catalogue of Chris Bowers as they are suppliers of Supercolumn Trees. using M27 rootstock  The garden is small, but that is not stopping me from fitting in more fruit.  The upright/columnar type plants, will take up less space and give that vertical element I am looking for. The order arrived amazingly quickly, and were planted out the same day.

"The texture of the fruits, with their white melting flesh and excellent flavour, has assured Beth of outstanding popularity. A very regular and heavy cropper. "

We had Concorde in our last garden.  It was a magnificent pear we both found to our taste.  It is also a 'pollination partner' for Beth.  The Pears are in the borders fairly close to the sitting circle on the same line and one each side.

We grew this one in our previous garden too, and it was one of Mr S's favourite, so much so that when I bought Apple D'Arcy Spice, he was most disappointed.

Scrumptious is an apple which can be eaten straight from the tree, so to prolong the season I felt  that Sunset would store quite well, and is similar to cox but is easier to grow.

Julian, a great gardener in Kenilworth, used to bring me bags of a delicious apple called Crispin, a good tasting dual purpose apple. That is on my list for when I get round to planting a row of cordon's against the house wall.

"A re-introduction to our range and an extremely popular newcomer owing to it's 6-8 week cropping period. Karaka Black produces long, cylindrical, shiny dark black fruits which have a wonderful aromatic true blackberry flavour. Very heavy yielding, out cropping Sylvan and Waldo in trials. Bred in New Zealand, the plant habit is only moderately vigorous and, although spiny, is less so than most thorny cultivars. A spacing of 5-6' between plants is ample. Can be grown as a trailing plant or traditionally, along posts and wires. Reliable, very productive, packed with flavour and with an extraprdinarily long picking period, Karaka Black is a top rate new variety."

This description is taken straight off Chris Bowers' website. Of all the above plants in the delivery,  this is one that I had a question about, and mailed the company with photograph, as I did not feel that the plant looked very much like a blackberry: 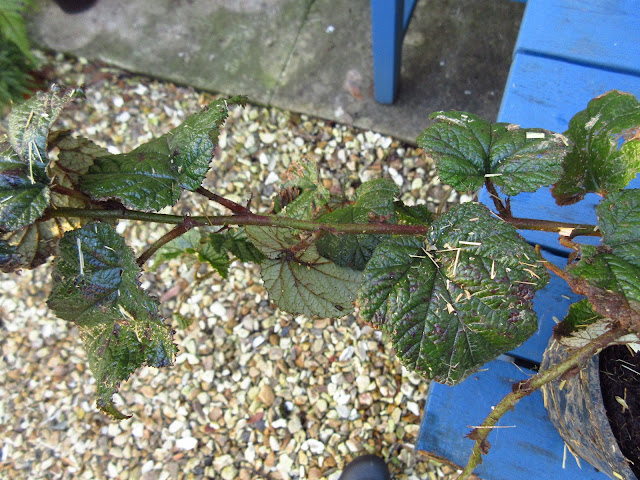 From me to Chris Bowers

Tried to call but message box was full

The query is about the Blackberry.

The plant I received has leaves that do not resemble that of a blackberry or any of the Karaka plants I have seen on line.  Could there have been a mix up with the labeling?  If this cannot be guaranteed as being Karaka, please send me a replacement.

Thanks for your message.
The plant you received is typical of our Kotata stock and we haven't had any queries regarding this before, however you are welcome to return the plant as per our t&c's.
Regards
Robert.

Further to my earlier querry you kindly replied promptly that

"The plant you received is typical of our Kotata stock and we haven't had any queries regarding this before, however you are welcome to return the plant as per our t&c's."

However I ordered a Karaka Blackberry, the vine you sent does have the Karaka label, see below. Can you confirm that this is the growth typical of the plant I should have received?

To date no response.  I am trying to be kind, realising that they are having a big rush, that they are probably up to their knees in mud...I'll plant the 'blackberry' and see what it grows into.

Question: Will this plant produce the lovely long fruits of Blackberry Karaka I hope for?

This summer my Aeonium Velour grew to about the maximum size I could cope with.  It was just not worth overwintering it one more season.  Many of the side shoots were taken off.  Three individual shoots were planted and have now taken.  The very top piece with its several side shoots just stood in a vase for a couple of weeks.  Instead of throwing it away, I thought I would try and see if it would take.  I how have a well rooted multi side branched plant ready to  bring on and have as my main specimen of Aeonium Velour next year.  This time I shall turn it regularly to help with a balanced form.

A couple of frosts this week, and I am discovering well protected areas of the garden.  The jays continue to collect all the fallen acorns....