A special SOS linked to the great PROP agator A'GENT'...who shelters other artists who love to contribute to his weekly reviews of things gardening. Mind you he has a few problems with one of his stars needing her roots seeing to.  Through his billboard you can see what other shows have been put on by other troups for our entertainment this week.

Earlier this year John Massey explained this to Stasher known to us under a secret name but I shall use Director just this time.  Over the Christmas period she has been exploring its meaning , as she reviews posts from the past year. If there is a suitable  interval a quick drink in the circle is often called for. 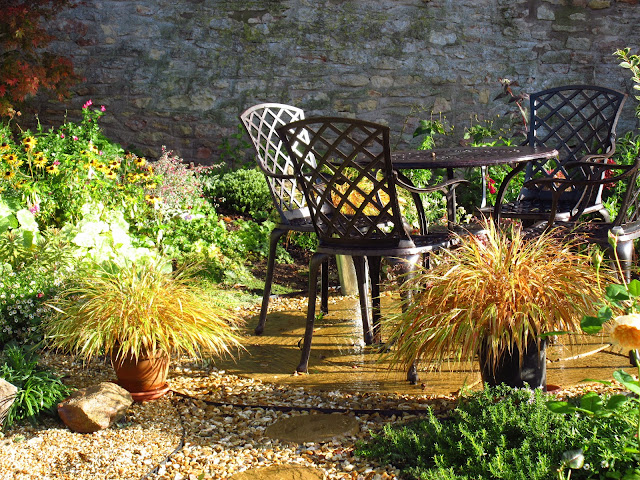 OH YES IT IS!  I hear you all think..."Yes, this garden is  her stage".  We can read her thoughts.  She doesn't really have to talk to us out loud, not even a theatrical'whisper shout' or'shouting whisper' is needed, however the fact that she talks to us (plants) means she cares.  The Director not only moves us around, but has planned a succession of plants popping up according to their season.

We are all put through our paces and depending on her sometimes vicarious attitude to our performance, we may be shifted either to the open ground, or to another position or be moved up to some other pot, for instance few months ago I had the chance to have this great 'vintage' pot.  I dare not mention the worst outcome.....yours to guess: the compost heap, but I do know that since I have now been cherished for a number of years, its the others who have to keep up appearances! 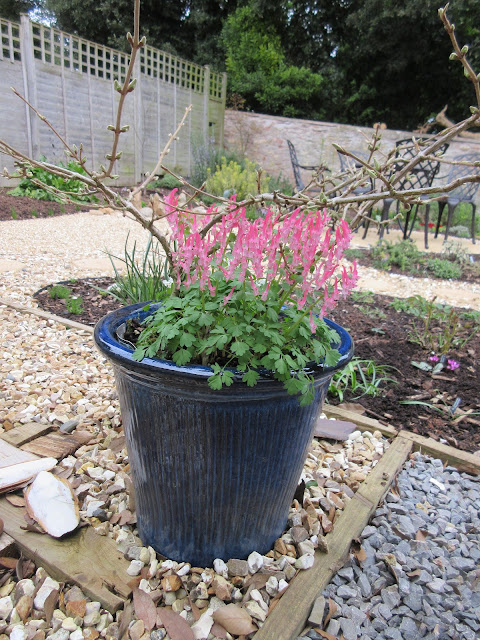 Both Beth the corydallis and Mariesii the Viburnum with her pretty pleated skirts leaves have been moved  to spend the 'Winter Season' gathering their strength for early performances in the Spring.  They have a permanent position with their toes roots freed from the constraint of this fine corset pot.  But darlings, don't take 'permanent' to heart: the Director just moves us around: Absolutely no peace for us, OH NO THERE ISN'T!

I have certainly spied this taking place: how she goes on.  Sometimes I just want to turn away whilst she composes herself. You should have seen the tears and  cussing as she chopped at  Bridie..well she was young, the bride that is...the Director is not and should know better.  Poor Bridie hadn't yet got her roots established and she was just stressed, she had the jitters. The weather has been against us all this year, with hot sun, lack of water, and then rain, rain, rain..But really, the Director ought to reign in her feelings....given an hour or two she was full of regrets.  Maybe the Bride will recover, only time will tell.  This is a 'promotion' photograph before she was brutally disfigured. 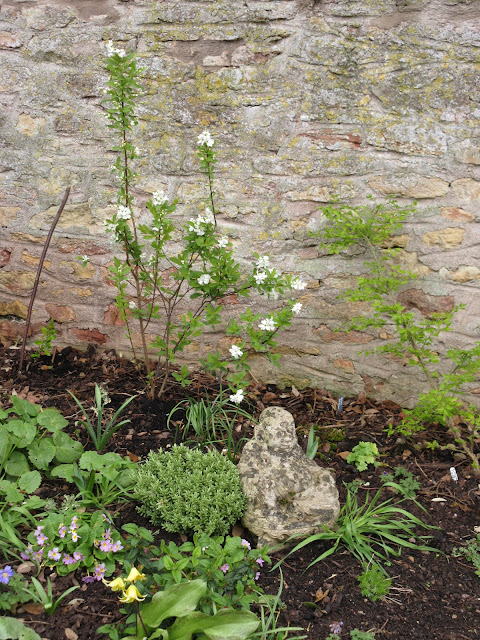 Each season a few of us are posed around the garden to form a Tableau, which to us non french speakers translates as 'temporary pictures'.  My native language being Japanese I would love it if she could be persuaded in the coming year to maybe think along the lines of posing plants from similar regions together.  She does often get enchanted by matters oriental, so I think the seed idea may be taking root, and I may yet have another staring role coming my way.

For sure the garden has been a great source of entertainment for the Director, it is her play thing, so much so, she devotes a large chunk of her time to it.  Music is supplied in the form of bird song, with occasional  night time solos or duets from some owls. The Director does have a 'Partner'.  Stage whisper: "him with the size 11s and the dangerous proclivity to chop at things when the Director is elsewhere".  We do love him really, after all he helped with the stage design and construction.

Even to the extent of 'publicity photos and write ups on something called Six on Saturday, she never stands still and is always looking to fine tune the Theater...OH YES SHE IS......

The garden is full of surprises...so much so that the Director herself can emit a little whoop of delight and applaud as actors, from previous seasons, who had been put on garden leave, and were 'resting',  pop out from places she had forgotten about.  We don't always come out on cue, something to do with 'climate change'? The Director has taken to marking the stage floor soil  surface with directions labels. The 'corps de ballet': those beautiful little snowdrops, and other early flowering bulbs,  are waiting in the wings  for their turn to surprise us all during the Spring Ballet Season which is nearly upon us.

Now I am going to surprise you all: 'The Reveal itself being a great theatrical ruse'... 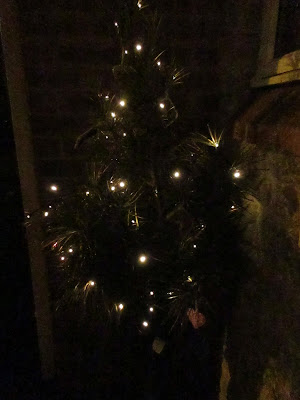 I  Kōyamaki , also known as Scidopitys Verticillata Scidopity which is my Botanical name International Stage Name,  have been 'The voice of this SOS Christmas Pantomime'.

A few months ago, I was 'potted up' into that fine blue pot featured earlier and for a short time, I hope not for long, have been placed 'front of house', and in my opinion ignominiously decorated....

Seriously I thought I was being made to live up to my name of Umbrella Pine.  Just because people think the way my needles are arranged in whorls like the spokes of an umbrella, enough is enough: Will someone please ask the effects people to turn off the rain effects .

I may be a solitary species in my genus and family,  at home in the cloud forests of Japan, but I am not so superior as to be secretly honoured to take part  in  the festive fun, and have enjoyed the Limelight...... 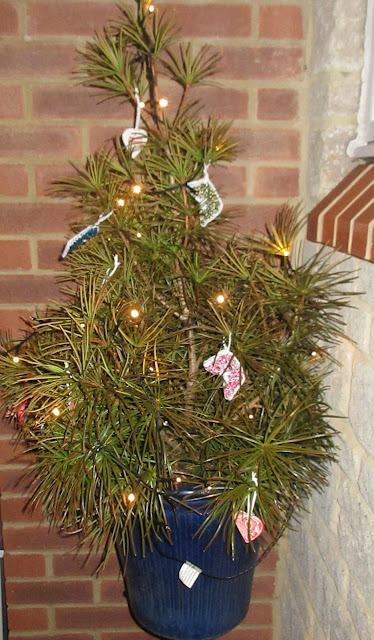 Therefore ladies and gentlemen, boys, girls and gardeners, I hope you have enjoyed the Pantomime staged specially this Christmas for you.

Tell your friends about it, and please leave messages of appreciation below, much appreciated I am sure. OH YES IT IS....