Lychees remind of earlier times when I used to climb trees as large as Horse Chestnuts to pick the fruit  trees, the best trees were ones that overhung roofs. It was easier to climb onto the roofs of houses than access the fruit at the end of long pendulous branches.  These were trees growing in neighbours' gardens.  At night long poles with white cloths  put out to deter the large fruit bats flapped around eerily.  The trees were laden and often merchants paid for the whole harvest and brought young men to climb high into the trees to harvest the fruits.  Towards the coast were small orchards, where the trees were more likely to be kept in check with careful prunning to maintain a more manageable size and make harvesting easier.  We would often stop off there and buy several bunches to enjoy at our seaside picnic.  Friends and neighbours knew of my thrill of tasting the best fruit, and when I used to return to visit my parents in Mauritius during the fruit season, people who arrive to welcome me with bunches of fruit.

A week or so ago I went up to Rocky Mountain Fruit and Vegetable, hoping to get a project box of rhubarb.  Sadly they were all sold out.  Its a friendly crowd that attend, some people may have popped in as they journey across the Mendips, or are popping into the Garden Nursery.  Just as I was about to leave another shopper was inquiring into the Lychees.  She was put off by the size of the box.  I too would have wondered what to do, and as quick as a flash I suggested to her that we share a box, and just asked her to put what she thought was half.

The Lychee were in tip top condition, with skins bright red and in still in a soft and pliable condition.  They soon turn brittle in dry atmosphere.  Three neighbours received a bowl full each straight away.  I rationed myself to about eight fruit at each sitting.  How many sitting a day?  I'm not confessing here. 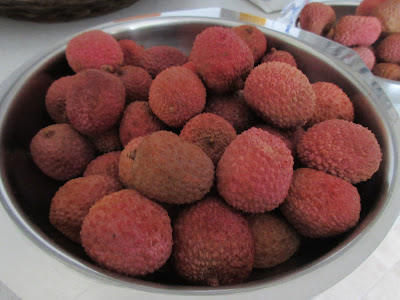 As I was coming to towards the end of the lychees, I had a batch of water kefir maturing ready for the second fermentation.  I wondered what it would taste like with Lychees.  Twenty or so fruit were peeled and stoned and added to a little kefir then blitzed with my hand held blender, and topped up with the rest of the kefir.  A couple of days of bulk fermentation then the mixture was strained and bottled.  With Lychees it is as much the smell as the taste.  The kefir seems to accentuate the various components of the Lychees.  We are having this as our breakfast drink, it stands heads and shoulder or higher than a Lychee tree above buzz fizz.

Other recent top successes range from Raspberry, apricot to the following:


This was an early trial.  Now I simply whiz up a couple of slices of pineapple and add these to the second ferment.  We no longer buy bottled fruit juice, and I even prefer Kefir as an 'aperitif cocktail'.
Posted by Stasher at 10:24