Saturday in the Garden - Six things and SOS

SOS six things in the garden, and a SOS for rain.  A dark cloud came over during the week, and I ran out hoping for a few drops.  It bypassed me, but apparently the green at the Cathedral just a short way away have a good dose.

The garden is really struggling, I have cracks 5cm wide in places.  Obviously it is deep clay there, do I fill them with compost?  The area highly mulched every year is also cracking, and the compost falling down, just to create a ready to crack zone for another year? The compost heap is still guarded by bumblebees, so I'll have to go out to buy some.

1. After cutting back the Rozannes of which I am starting to tire, though I shall probably keep just one, I had a big gap.  I do have homes for the plants in a friend's garden, but it is really too dry to dig into the soil at present.  We rescued our bits of 'stumpery' which were posed on the wall, and which the undergrowth clearer at the cemetery had removed ready to be chipped or such like, and used them to fill certain gaps which need protecting, either from the young fox who now saunters along the wall several times a day, or the neighbouring cats who dare at their peril enter the garden. Could those people not appreciate our art installations on the wall?  A forced visit to enjoy the wonderful art in the Cathedral this week, could be part of their CPD? 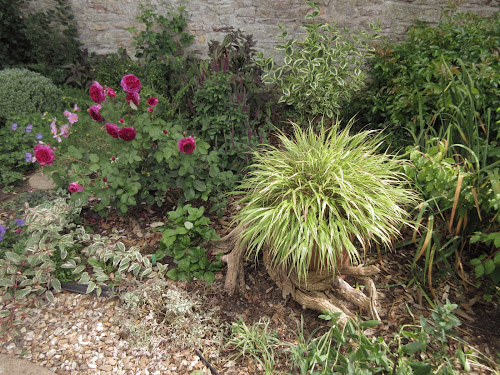 Here the Japanese grass Hakonechloa Macra Aureola growing in a pot fills the gap together with some of the degraded wood.

2. Nearby the deep red of Rose Munstead Wood is showing bleaching on some of the petals. It is getting the odd bucket of water, as I would hate to loose this. 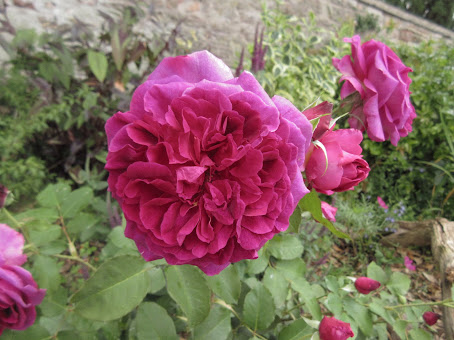 3. Another pink shrub that has needed water is the Hydrangea.  I had three clumps and narrowed this down to two, and one is having no water at all so we shall see if that survives for another year.  In any case I would rather use the water on my vegetables. 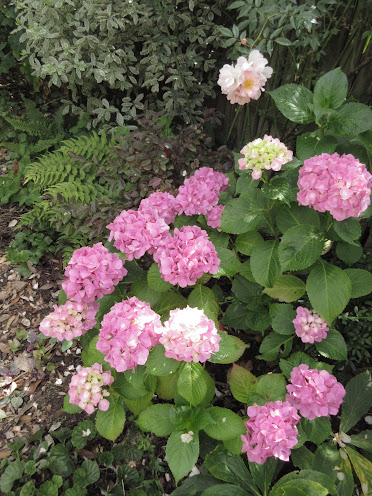 4. For flower power and summer show you can't beat  Pelargonium Capricorn.  As it is growing in a pot, it too is also standing in a gap. I have already taken cuttings to be taken through the winter, as I shall be needing its pot. Just the one plant, and having been continually dead headed since May, I wouldn't be without this one. The spare gaps in the garden at the moment, are where semi dormant or bulbs are hopefully coping with life underground away from the scorching sun and winds. 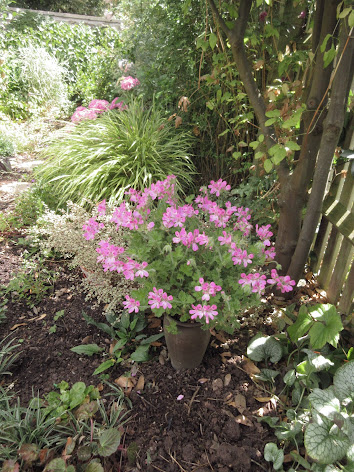 5. The studio pot by Jacky Ardens from which the Pelargonium ardens had to be extracted last week, is now filled with new soil and the succulent Portulacaria Afra Variegata now in its second year with me.  I had a little bonus in that the bit which I had stuck into the pot had rooted, and now I have a second little plant growing on in its own pot. 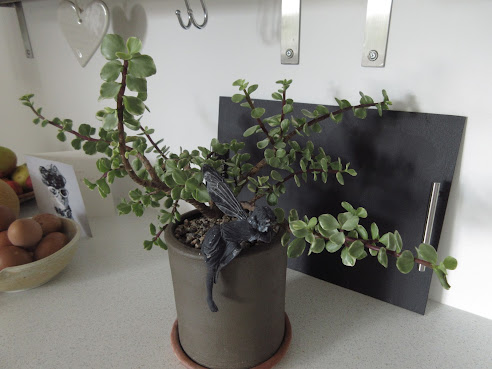 6.  I just hope those snowdrop bulbs are coping underground.  The pansies all died off in the heat and lack of water, and for now are covered with some twisted root which I kept for their interesting structure, and were part of the art installation on the wall, or part of my poor woman's stumpery. 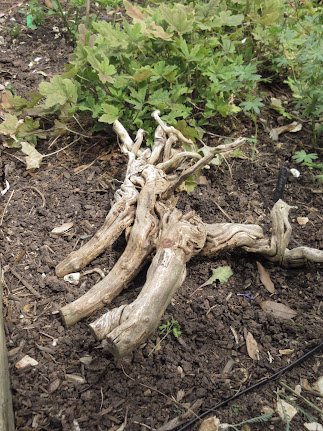 Since this is really 1a forming part of the original wood collection on the wall, I can sneak in a picture of one of the decorative oreganos in the garden: Origanum Bellissima as it tumbles onto the path. 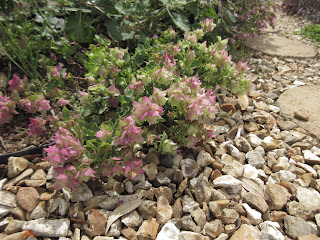 With still no rain on the forecast for at least a fortnight, I won't take any bets on there being a hosepipe ban with days.  We are saving all possible waste water for the garden.  Hope things are better for the other gardeners, particularly those who are on holiday like The Propagator, who still has his anchoring post.