Coconut Buns from The Book of Buns

This is the bake for the second half of October...and since Friday is Bun Day chez moi, I rose to the challenge...

I baked two types of buns on Friday...

The first  was a no knead batch of Khubza Bil Ashab, a savoury small bun, which had been rising overnight in the fridge.  This is about the third time I've baked this recipe from The Book of Buns.  I added some cooked millet seeds, red onions, chopped olives, sage and coriander and dipped them in seed mixture  too!  Marie Claire  who is a lovely friend who lives close by and is improving by leaps and bounds in her bread making, came as requested straight from her session at the gym, and I gave her a small bag full...and her copy of The Book of Buns.  I had thought to save it for her birthday next month, but I think it was getting too cruel to hang on to it any longer.  Today I picked up a 'lame' from Leamington and delivered it as a 'Prize' for the excellent sourdough bread she made on Thursday.  I first helped start Marie Claire on her bread journey back in 2007....and I wrote about it back then.


But this is about the Coconut Buns, which Jane Mason says is one of the nicest Chinese Buns.  Of course I followed the recipe to the letter this time, except for the technique of shaping and rolling...as the dough was beautifully soft and elastic, I used my hands, and did not extend the dough so much between the foldings, as I wanted to keep my little lump of coconut filling somewhere inside rather than thinly spread in the layers.   I realise now that I missed the opportunity of doing half one way and half the other...They took a little longer to rise, well the weather had turned markedly cool.  I think using part of the flour first scalded with boiling water may the first time I have used this technique and now understand  what this adds to the dough: I did get a soft and elastic dough, and soft end bun...a little more digging has found this explanation....Techniques are also explained in Jane Mason's other book on my shelf called 'All you Knead is Bread'. 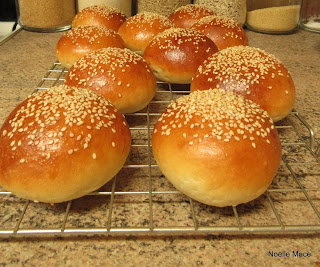 Since I will definitely be making them again, and I shall try both ways next time: keeping the blob of coconut, sugar and egg, and folding it more evenly in the bun.  Today we had our first taste  after a couple were carefully warmed up..Mr S loved them, and said finding the 'cash of coconut' in the middle was like finding the jam in a doughnut! 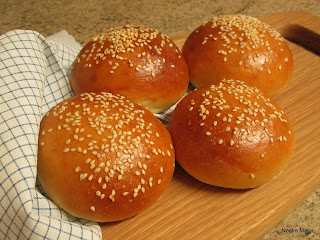 Sometime next week I shall have MC over and enjoy a bun each together with a cup of Mauritian Vanilla Tea, after we have had a good workout at the gym!  I have made coconut buns before very similar to Macatia ena Coco,  with a different technique altogether, explained back in 2012.  The coconut is pan roasted, with some of the coconut in the dough, as well as spread on the surface of a flatted circle.  I wonder whether the 'Mauritian Macatia ena Coco' buns were introduced there by the 'Chinese Mauritians'?
Posted by Stasher at 16:27