In a Vase on Monday ..New Vases

The apprentice is now on her own journey.


Izabelle enjoyed your 'in a vase on Monday' so much she started her own 'on Sunday' one. Here's her first vase (bought today in a charity shop) with garden flowers...

The composition is lovely, and I wonder whether she took on board some of the tips I passed on, or is it a question of DNA?

During an afternoon spent pottering in the garden yesterday, mainly replanting some over congested sempervivums, using my new lovely wooden dibber, my eye was caught by two pale pink blooms.  As I thought they would be spoilt by a probable overnight frost I cut them and brought them into the house.

The colour of Izzi's vase had been on my mind, and I was searching the 'dark recesses' of my mind, over the washing up this morning, when my eye fell on the very large jam pot, which stands as an ornament on a Kitchen shelf. 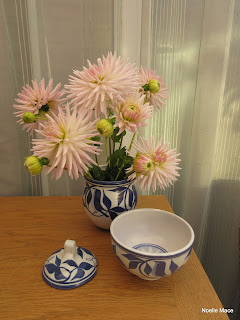 Yes that would be the one I would use for many reasons: it was blue and white, and there was a link between this pot, Izzi and I, a very tenuous link, but a link non the less.

When I first moved to Kenilworth, with very few friends, a lovely real 'lady' from the WI became good friends with D and I.  She has a lovely little dog Dudley, and they both come over from time to time, for jam and scones and tea etc.  In addition to the famous scone recipe which was given to me by Jean, and which has won me many prizes, Jean gave me this lovely Jam Jar.  I am in the habit of passing small jars of jam to her,  and she had seen my bowl and mug in the same design.  One day when I took over some jars of jam for her, she gave me the jam pot.  The potter is Laurence McGowan who has his studio in Wiltshire.

The connection between Jean and Izzi is that Jean gave Izzi her first soft rabbit as a Newborn's present.  Now Izzi has an extended family of rabbits!  I think I should take the dahlias round to Jean this afternoon. 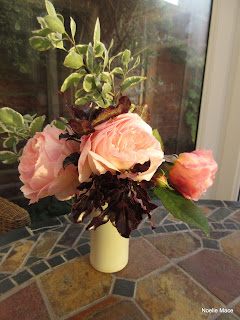 For myself I picked a few blooms from the climbing Shropshire Lad.  Close up the blooms show the soft and peachy petals. 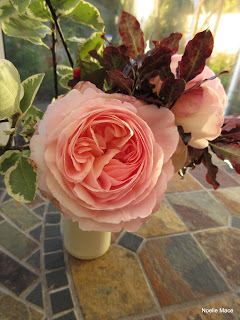 Supporting the blooms is some Pittosporum Tom Thumb, which is the dark purple one, and the two tone green and cream with a few pink 'freckles' is the Garnettii.  The vase is a simple, very well loved, and useful vase brought back from Japan by my father many years ago.

Cathy who is hosting this has a lovely collection of Dahlias this week, so do go along an see her entry, and others.
Posted by Stasher at 12:31