When two different people, at opposite sides of the world send you a link on the same day, to the British Museum site showing Giorgio Locatelli making 2000 year old bread, you get that strange feeling, that fate is pointing a finger!

We've been to Pompeii and Herculaneum several times, and I was very interested in the Bakers' premises, and have seen one of the carbonised loaves of bread.  I searched my blog for my entries for when we were on Holiday In Sorento back in September 2010, but I had not written up very much at all...having intended to go back and update.  With a little bit of searching I found the pictures...how about this one of the bakeries.  They had their own mills to grind the wheat, they were made of basalt, and I have heard it say they were turned by donkeys. 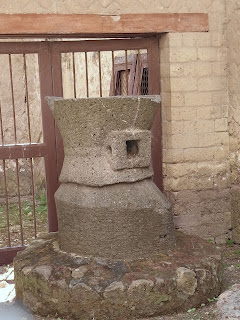 Just thought I would put in this lovely mosaic...I imagine the doves eating the spilled grain, but here they are raiding a jewelry box..sure there is a metaphor here for innocence being compromised with jewels! 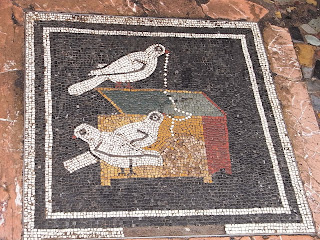 Just as now, they found evidence to show that people also baked at home, even though there were many largish commercial bakeries.

I varied the recipe given on the British Museum site a little, as I felt the salt was very high.  I even used my special salt from our holiday in Sicily from the area where Romans harvested salt from ancient salt pans.

Overnight I allowed 125g spelt flour, together with 200g water, and 3g dried yeast to develop in place of the ferment given.

With 400g stone ground organic spelt, and 400g wholemeal flour on the workbench, I added 12g salt, 10g Diax, as I was not sure what 'gluten' in the recipe meant, and gradually worked in about 520g water into which I had disolved 6g dried yeast, as well as all of the overnight ferment. 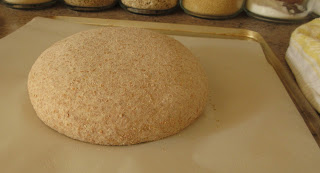 I gave it the kneading, and just the one rising as given in the video, then used string which I had soaked in water to prevent burning, and cut the top into wedges.  I wanted some smaller loaves so made two with the quantity given.

Here they are cooling on the rack.    I had put one of my little heart cutters, covered with foil and weighed down with a little stone.  But only on one of the loaves. 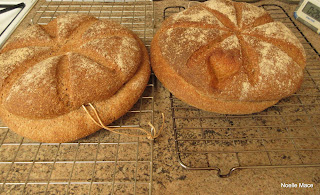 I had thought maybe the string and loop was used to hang the loaves up whilst they were cooling, but found out that the crumb is still very tender at first, and it started to pull through the loaf.  Once cool the string stays in place.  Having seen bread shops all round the Mediterranean, and also very old paintings...I think maybe the loops were there so that several loaves could be hung up on poles in the shop, and also carried together by the delivery men, strung on poles.  I also wonder whether the loaves were hung up from the ceiling in houses so that mice and rats could not get to the bread overnight.

Anyway, many thanks to Debbie in Kenilworth, and Lizzie in Australia for your Facebook suggestion and link.  It has been great fun making these.  If Debbie is back tomorrow from one of her many forrays with Keith to interesting parts, I shall deliver one of the loaves to her!
Posted by Stasher at 15:21