Autumnal Sticky Buns from The Book of Buns

Another five star bake from Jane Mason's The Book of Buns.  This is mid Novembers bakes from the face book page.  Jane explains that these sticky buns are a very Canadian Thing.  She also says that you can use pureed apple or pear, and I cannot wait to try a pear version.  I also find pecan nuts absolutely delicious...one of my weaknesses is maple and pecan plaits!  I thought these were very appropriate so close to Thanks Giving Day.

I had bought a small but lovely pumpkin a few weeks ago.  It had the most wonderful grey green smooth skin, and I had kept it a few weeks admiring its beauty in the low winter sun...but it was needed for sticky buns. 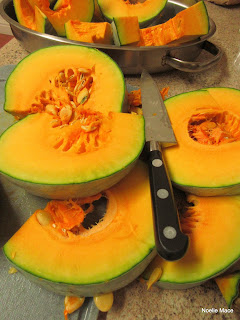 In readiness I roasted the pumpkin a couple of days ago, again with the skin on, and then removed that when it was cold.

The dough needs 350g of puree and the filling another 50g, so there is plenty left over for soup.  I noticed that there are loads of butter nut squashes in the shops, so one of those steamed and pureed would the job very nicely too.

To the 350g of pumpkin which I blitzed with my blender stick, I added the egg, and blitzed that in, before adding it to the 600g flour,  3g instant yeast activated in 75g milk, 50g sugar, 10g salt. 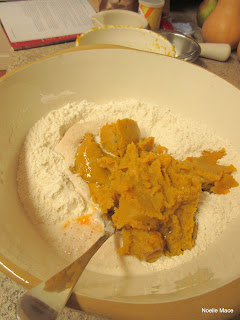 When I started to knead the dough, I realised that I would need to add a little more liquid, as the dough was very hard to get together...I must have 'roasted' out too much liquid from the pumpkin, so I just kept dipping my hands into a bowl of water on the side and kneading the dough till it was just right.  Not too much though, as there was 50g of butter to knead in at the end before a further 10 minutes of kneading.

It was early when I started this dough, before breakfast, and I let the dough rise in its own time just a room temperature which was on the cool side.  After breakfast and a Pilates Session down at the Gym with David, and cup of coffee etc., the dough was ready.  It has risen beautifully, and ready for the next process.  To get the dough out of my bowl I use my much loved and well used plastic scraper from The Bertinet School of Baking which my dear friend Vickie gave me many moons ago.  Every Holiday deserves a little souvenir, and for our Cambridge stay it was stainless steel dough cutter and chopper.  It won't replace the flexible scraper, but it is great for cutting through large pieces of dough, and I even used it to chop up the pecans. 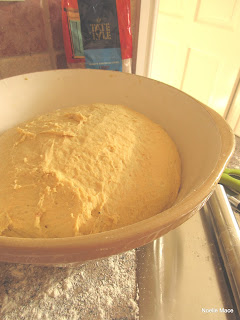 I had been thinking of what to bake the buns in.  My usual roasting tin has ridges in the bottom, and all my other tins have loose bottoms, so I was very tempted to buy yet another baking tin.  I resisted and decided instead to use the grill pan.  It was a 34 x 26 cm, just a little larger than the 40 x 20 cm pan recommended.  My tin was only just deep enough...next time I will line it with foil to add a little collar.  I only lost a few drops of so of goo as the buns bubbled in the oven. 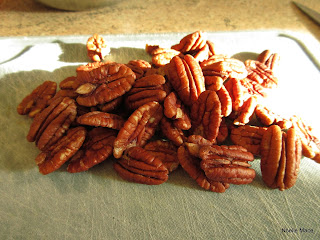 I know that nuts are usually better is gently 'roasted', so I put the chopped nuts in the oven at Gas Mark 4 for about five minutes, then added the lovely buttery soft brown sugar, and butter to melt, before adding the milk.  For the goo, you need 100g butter melted, 100g soft brown sugar, 75g milk, and 100g chopped pecans. 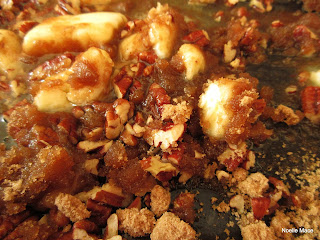 I gently pulled out the dough on a lightly floured surface, and patted and pulled the dough into a rectangle before leveling it out with the rolling pin.  The filling is made up of 50g pumpkin puree, mixed with a teaspoon each of ground cinnamon, ginger, allspice, but I substituted mace for the nutmeg!, 50g soft brown sugar, and 50g soften butter.  I spread it across the dough with plastic dough scraper.... 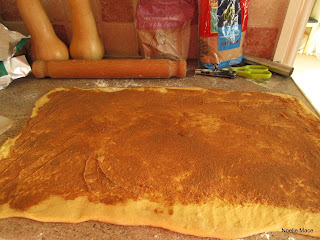 Then rolled it up starting with the edge further away towards me.  I usually end up with a thicker middle bit, but this time I teased and stretched it out until it was even all along.  The slices went into the grill pan on top of the 'goo'.  I decided that twenty smaller slices would fit the bin better than the 16 buns recommended. 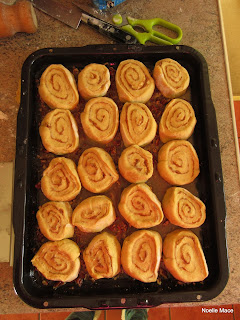 After an hour or so rising, they were ready to go into the oven. 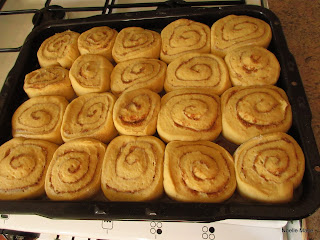 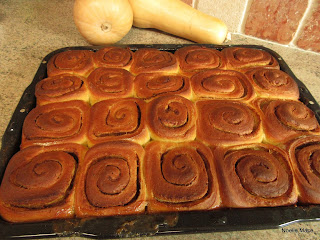 These are cooked at Gas Mark 6, and after 30 minutes, I covered them with some baking parchment, and then they had their final 10 minutes before coming out of the oven.

You are meant to turn them upside down on a large plate...but I do not have one large enough! 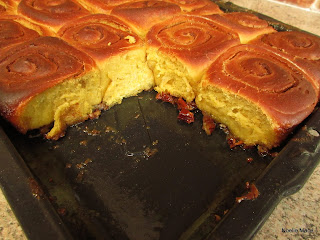 Four hot ones went round to Dawn, whose daughter had just arrived home to be looked after, after what looks like a leg fracture.  Then we settled down to tea and a bun each. The verdict...SUPERB.  The buns are so soft and light, and tasty, and with a special gooey bottom with contrasting crunchy pecan nuts

When I had finished I 'walked' four over to Marie Claire.  Steve had been in the garden all day reinstalling a fence panel which had got damaged during the recent storms....  Just as I returned home, the phone was ringing, it was Marie-Claire: she wanted to say this must be the best bake so far!!!! But the other ones were very good too!  Steve had had two with his cup of tea, and she had had one...now there was just one left! I explained that it was in The Book of Buns, the same one that I gave to her for her Birthday only a couple of weeks ago.
Posted by Stasher at 19:28

Labels: Baking, Books, The book of buns by Jane Mason