Quince prepared for the freezer

I was lucky enough to be given a basket full of quince by Penny.  Last year I made a pale quince cheese and still have a jar or two in the cupboard.  I put it down to this and the fact that Penny had given me a nice pot of her beautiful deep coloured quince cheese made this year too, that meant that the quince lay prettily in their basket filling the dining room with their sweet soft perfume.  Each day I looked at them, and could not bring myself to do something with them.  Sometimes it is like that with me...almost a malaise.

A couple of days before setting out for our break in Cambridge, as I was dusting around...I spied that the end of one or two of the fruits was going brown, and I felt completely guilty: a selfish shellfish as my mother would have put it, for having asked for, being given the fruit then wasting them.

However without even consciously thinking about it...a solution came to mind.  It came as I was wondering how to use the fruit in deserts.  Usually they need long cooking, which sometimes puts one off using the fruit...but what if the fruit was fully prepared, almost fully cooked, and ready to use?  I consulted various cookery books including my old Jane Grigson's Fruit Book  but no clue was given.

I put all the fruit into a large stainless steel bowl, and gently brushed them, removing the downy bloom, put them on the chopping board, and cut them into quarters, removing only the brown bits which luckily had not spread, the stalks and the the dried bits from the blossom end.  The fruit is so hard and I thought how much easier to remove the cores when the fruit was cooked.

They went into the pressure cooker up to about half way level, with the water level about a third of the way up the fruit and cooked them for 8 mins at 15lbs pressure.  The fruit when completely cold was a beautiful rosy or peachy colour, and so very easily cut down into segments, and the woody core removed.  I even decided to leave the skin on as it was silky smooth.  So that individual pieces could be taken out I froze the segments separately on a baking tray.  With a layer of cling film below the first layer, and one before the second layer, they went into the freezer overnight and once hard, the following morning I put them all together in a large bag. 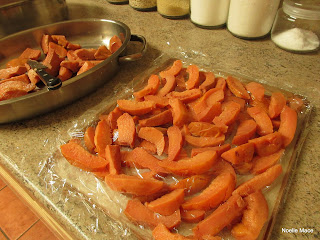 There was very little 'juice' left in the pressure cooker, so this was added to the misshaped segments and put into two small bags together, and they will get pureed at some later date for a tart or something similar.

So from feeling a little bit down-crested I ended up with a solution, which will mean that I can pull segments from the freezer for deserts or savoury dishes throughout the year.
Posted by Stasher at 18:27

Labels: Feeling pleased with myself, Feeling sorry for myself, Friends