In recent years we have had panettone for Christmas Morning Breakfast and I have enjoyed making several versions.  This year I felt like a change, and was really happy to find Orange & Anise Snowflake Bread on Domestic Gothess's blog, and Hannah has cleverly organised things so that there is als an easily printable version.

As Mr S was away at a show today, and I had this damp and dreary Sunday to myself, I thought it was just the time to try this. The one I am freezing is the better one which I shall finish off on Christmas Morning, in the oven, and will freshly apply melted butter and icing sugar on the day.

I started off with warming up the milk, and to cool it down, poured the 100ml straight onto my weighed and chopped orange and lemon candied peel mixture...I did not have sufficient candied orange peel, so added some of the lovely candied lemon peel from a different batch.  In the meantime I pondered about the Star Anise.  I have the whole ones, and I have ground Anise, but no ready ground Star Anise..so into my little spice grinder I added two whole star anise and some of the sugar and ground that down together.  This worked rather well.

I then drained off the milk, and added the 80g bread flour, and the fast action yeast....after doing the clearing up of the breakfast things, the Starter was Ready to Go! 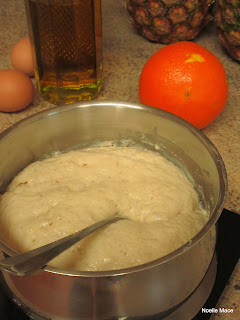 The orange had just a few tiny dark dinks in an otherwise lovely skin, so I cut them off before grating the zest off directly into a larger bowl to make sure I caught all that lovely orange oil.  To this the egg, orange blossom water from my lovely little brown bottle from Nielsen Massey, my organic cold pressed rapeseed oil rather than the olive oil of the recipe, and two eggs, and the sugar and anise mixture.  After a good whisk round, I then added the flour and the Starter. 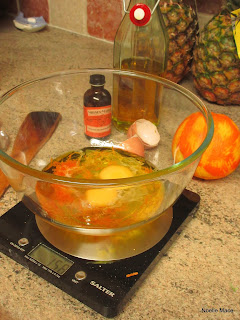 With no bread kneading machine except for my arms and hands, it all went onto the worksurface, and with my scraper in one hand, I managed to work the dough beautifully, and after ten minutes stretching, then softened butter was added and kneaded again, before finally the chopped candied peel was added.

After resting the dough...it was time to shape it, and I followed the instructions...but got rather carried away or was it just a mistake, but I cut too many times, and ended up with an eight armed snowflake..but the second one had the six as per the recipe.  So not a snowflake at all since all snowflakes have six points only, and they are made of frozen water, but oh so pretty, and so tasty. 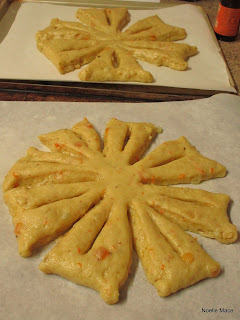 After resting again they were brushed with egg glaze then went into the Oven at Gas Mark 4, half way along the cooking time, I swapped them over in the oven, and also turned them round on each shelf. 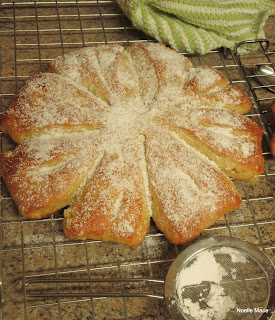 Maybe a little more pulling to get the star shape as good as Hannah's.  Tomorrow my little taster is coming round with Penny, so I am planning to have some left to have then.  Just now, I am off to make Sunday Afternoon Tea with a taster of Christmas Breakfast Bread! 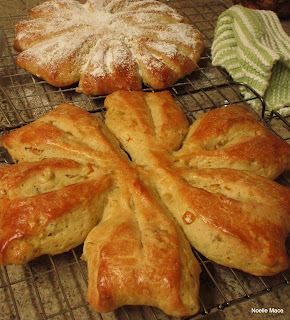 The second loaf is going into the Freezer...which I defrosted and cleaned out today, ready for the Christmas stash of goodies.  The one I am freezing is the better one which I shall finish off on Christmas Morning, in the oven, and will freshly apply melted butter and icing sugar on the day.

Having eaten some, I must say that the 'bread' is more sconey than I would like, so having had some advice from Jane Mason, I shall try it with less yeast next time, and allow for a better longer first rise.  The flavour is excellent, but I need to work on the 'mouth feel'.