When we were away in Cambridge, and the cold wind was blowing Mr S started to look for a new woolly hat since he had not brought one with him.  We looked and looked, and suddenly he looked at my hat, and said he wanted one similar to that.  When we got back, I got out my STASH of yarn, I have one that is rather on the large size, however we just could not find the right manly shades, and it would have to wait!

Last weekend we had a drive out to Notcutts Garden Centre at Solihull on the pretence of going to look for slippers at the Moshulu Shop, but sadly discovered it had been closed some time!  Of course if there is a Wool Shop there is always the need to pop one's head in.  So after we had a turn round all the sheds...we popped into the very big shed 'Cedar Cottage' housing Stitch Solihull.  Ana was away so instead her Mum helped me...we got out the tape measure, measured D's head, compared other patterns, and decided that one ball of 100g Aire Valley Aran from West Yorkshire Spinners would be sufficient.  Mr S chose the colour called Autumn Forest.  I also bought some new double ended needles.  Normally I use fixed circulars as these usually have the best bonds for lace knitting.  However with this yarn I would need a 5mm size needle, so decided to try out the needles with an interchangeable 50cm cable to give the right size.  However on the decreasing I reverted to my double ended needles. 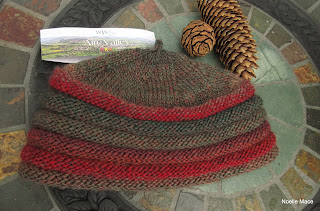 The autumnal colours in the Aire Valley Aran are gradually blended giving a nice graduation which shows up well in the ridges of the Scrunchie Hat.  It looked by the end of the fifth ridge that the hat would turn out quite dark, so I found the other end which was russett, and started to knit from there.

I have been a great fan of West Yorkshire Spinners for some time now, as their sock yarn is beautifully made and comes in some great colours.  Its great to support British Wool, and British Manufacturing...

Today we went back to Notcutts again.  This time it was to buy a Christmas Tree.  We have been using the same old Christmas Tree which is brought down from the loft each year, since I don't know when.  It has had several washes under the shower, and last year, some of the little bits that you have to straighten out started to break off!  I have been looking closer to home all week, and we did pop into a garden centre, but there was nothing that we liked or real trees which had been pot grown.

When we had come out the yarn shop last week, we started chatting to a family with a young boy.  His excitement at choosing his own Christmas Tree was infectious.  They had been looking at these trees, and we had joined in with their discussions.  When we arrived there this morning we were not disappointed...the trees were as good as we remembered.

We then popped back into the Cedar Cottage, and this time Ana was back, and Ana's Mum and Pop were in the shop too, and Mr S proudly modeled the hat.  They have a great selection of fabrics, and I notice they also run some interesting workshops. 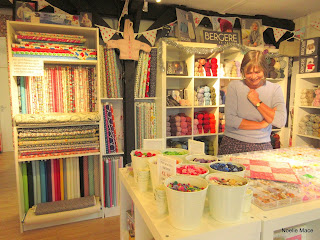 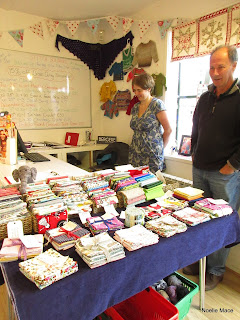 There are comfy sofas too if you want to stop and knit... 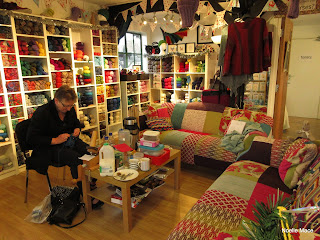 This time, I could not resist the new WYS sock yarn called Festive Holly Berry, since it brings some of my favourite colours: lovely greens, a rhubarb/cranberry red and cream into a pretty self patterning yarn.  For those who have not heard of this term, it means that the yarn is dyed in a sequence of colours so that when you knit it up, it comes out in a pleasing pattern reminiscent of fairisle knitting.
Posted by Stasher at 16:35