On Friday Liz came round for coffee and pan de muerto bun, and during our chat in the conservatory, she said how she had been impressed by the pictures I sent her of the Halloween bakes. She walks her dog on Abbey Fields and she had been hearing that our area had a very good reputation and was well frequented by the trick or treaters, and that people had been making a note to make sure to visit us next year!

I must add that all the visitors are very well dressed, with parents, and I have never had a trick given, even when we had run out of goodies.  As soon as the last biscuit was gone, we removed the decorations, turned out the lights in the pumpkin, and decanted ourselves to the back of the house.  One of the 'etiquette' rules of Halloween round here, is that you only knock at houses that have obvious 'invitations '. 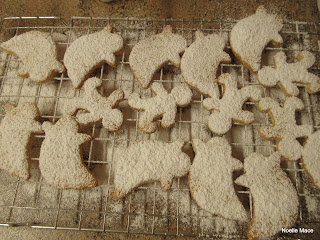 I know I shall probably loose the recipe, as it was loosely based on one I found, so I am going to post it here.  Previously I had made ginger type biscuits, but remembering that we had quite a lot of little tots visit, I thought a more gentle lemony one would do.  I made ghosts, and 'mummies', which is what the little gingerbread people looked like once they were dusted with sugar.  What I also like about this recipe is that it holds the shape you cut it in and does not flow...I think I shall use the same one to make star and heart biscuits for Christmas.  So here goes....

60g golden caster sugar
The peel of a large lemon grated finely over the sugar in a bowl, so as to catch all the oil of the lemon
125g good quality butter
the yolk of one medium egg
The 'seeds' from 1/2 a juicy vanilla pod

Beat the first five ingredients together until light and fluffy, then blend in the remainder.
Bring the dough together, then shape into an oblong and an inch deep, and put in the fridge for about 40 minutes.  Take half out and roll and stamp out with the biscuit cutters.  You can reroll several times.  Place well apart on baking parchment, and place on trays, to cook in a preheated oven Gas Mark 4 for about 15 minutes...Keep checking after about 12 minutes, when the trays may need to changed around.  They should just be light brown around the edges.  Take them out of the oven, leave on the tray for about 5 minutes, then finish the cooling off on a cooling tray.    Repeat with the other half, or you could freeze this if you want just a few.

When cold dust liberally with sifted icing sugar.  I made just one egg white worth of macaroons for our own little biscuits to have with coffee!
Posted by Stasher at 15:31