The challenge for the beginning of November in the Book of Buns facebook group is Anpan.  This is a bun from Japan baked in the oven...it uses the technique by starting with some scalded dough and for the centre you use red bean paste.  Of course you can use jam and make them into Jampan.  Its not that I don't have many different jams already prepared, and I had thought that the quince cheese which I have made recently would be quite appropriate for Japanese Buns.

However this is a new opportunity, so I went to Waitrose, where I thought I would find the ready made product but when I hit a blank wall I trailed the internet.  Luckily I had decided to buy a 500g of bag of Adzuki Beans instead.  Having researched some of the flavour combinations in Asian sweet dishes using the Adzuki beans, I came up with what I think will do very nicely as the stuffing for my Anpan Buns

As I was going to pressure cook the beans this morning, they were put in soak in plenty of water yesterday, and before cooking, they were well rinsed.

The rinsed beans were covered with enough fresh water to be about a centimeter above the beans.  After 10 minutes at 15lbs, they were nicely soft, and almost all the water had gone.  I always consult Madhur Jaffrey's World Vegetarian when it comes to cooking pulses.  Her explanations cover standard cooking as well as pressure cooking times.  Also with interesting recipes!

I decanted them straight away, minus the star anise while warm into a mixing bowl, and added the butter, sugar, and grated orange peel, and blitzed it with my Hand Blender.  I wanted a little texture, so stopped before the whole lot was perfectly smooth.  You can sieve it if you want it perfectly smooth.

I thought to take a quick picture just as I started to blend the mixture. 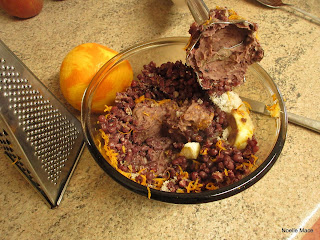 This quantity yielded 550g thereabouts, so enough to do at least two batches of the Anpan Buns from The Book of Buns.  I shall start with one batch, and in the meantime freeze the balance of the filling.  I read that you can keep it in the fridge for a week too.

As I put a lot less sugar and butter than some recipes, I had a quick taste, and for me this is just fine. You can add more of course. I have read that this is the Japanese 'Chocolate', and when I tasted this I thought...Terry's Chocolate Orange, but in my opinion much nicer! I'm sure that I shall be coming up with ways of using this in other dishes, and changes to ingredients....maybe honey instead of sugar next time!
Posted by Stasher at 11:15

Labels: Baking, Recipe, The book of buns by Jane Mason