In a Vase on Monday - Colliding seasons

Its early November, and usually I would not have very much at all to cut from the garden...maybe a late rose, and I have quite a few red Etoile de Hollande on the pergola...but it is misty or foggy and damp today, and I hardly feel like getting out the ladder, plus they may keep for a little longer.

I have primroses out, just the odd bloom, a little nibbled, and the squirrel continues to go round the garden digging up bulbs!  I very nearly gave up on a Vase on Monday today, but looking out thought to put two items to stand witness to the colliding seasons: Dahlias and Holly in full berry. 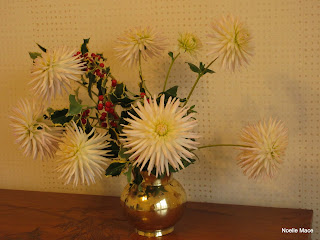 Cathy has come up with a colourful bunch and managed to get some good light on her Vase, so it well worth going there to have a look.  I look forward to viewing some of the vases from sunnier and warmer climes, and those in the southern hemisphere.

Labels: Garden, In a Vase on Monday