In a Vase on Monday - Late Harvest end of November

I have no greenhouse or cold frame..but I am happy to play the game of moving plants around to gain the greatest benefit for them, from a window sill, to the conservatory to the patio.  A few years ago I bought a chilli plant from Waitrose, and kept it going for three years, then last October just scattered a few seeds at the base of the mother plant.  A few seedling were potted on, and all except one given away.  The whole plant was covered in ripened fruits, but with a sign that some greenfly were starting their assault on the plant.  Before tackling the infestation, I picked all the fruits. 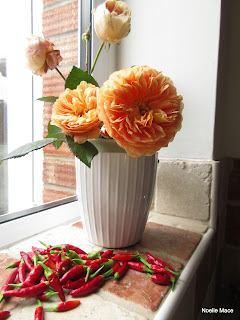 A few roses are surviving the winds and rains.  Cathy who hosts this meme is also featuring roses this week.  In the vase at the back is Shropshire Lad which is not opening well, but in the foreground is Crown Princess Margareta.  Both plants were acquired in the Winter of 2013, and are only slowly adapting to their new homes.  I am really pleased at how Crown Princess Margareta is performing in the low light...David Autins's site does say that it is ideal in shade, so I am beginning to think that it is well suited to these low light days.  I placed the roses in my narrow vase, but then just put that in my pot on the Kitchen Window sill in which I usually have a pot of basil growing.

I moved the arrangement to Conservatory where there is better light, and still the beautiful deep apricot blooms of Crown Princess Margareta glow in the low winter light. 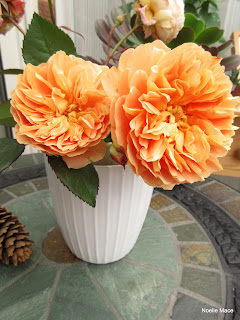 Labels: In a Vase on Monday, Roses