Baking for a friend

Most weeks I take a loaf of my home made bread for Roy.  Last week when I was dropping off a still warm from the oven loaf, Julian asked me if I would bake him a cake.  He had seen Orange and Almond Cakes at a recent fete and explained that he had waited around to see if someone would sell him one, but to no effect!  He is a Coeliac and also finds any baking powder a problem.  From time to time I have taken 'remains' of baking sessions when I have baked for a visiting friend.  Usually the bakes have been based on gluten free flour.  I was searching and was really pleased to find a recipe for Spanish Orange and Almond Cake which has no baking powder at all.  If you want the recipe do have a look at Norma's Recipe  which is easy to print off, which I have done.  I made this as an early Christmas Present for Julian, not that I have ever given him a present before!  But I have received some lovely apples from him in the past.

I bought some lovely organic oranges, and decided to cook all five, and have a ready processed portion in the freezer for a second cake some time soon.  From one of the oranges I removed some of the peel and boiled it with some sugar, finishing it off to make some fine candied peel to decorate the top of the cake. 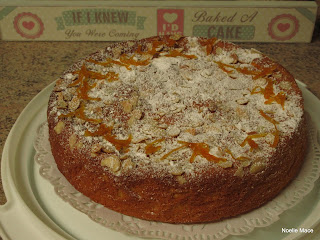 Julian called me to say that the cake is delicious, and he is finding it hard to make it last!  I had a hard time stopping Mr S from trying to have a little bit from the side...He did resist..but it reminded us of the problems of leaving cakes around.  We have so enjoyed watching the programmes currently being shown on TV about five and six year olds, and the tales they tell when they are unable to resist a cake left 'unattended' in their play area.
Posted by Stasher at 19:18