Sock Knitting and other seasonal crafts.

Sometimes you just have to thread a project onto a slip of wool and start another one.  Its not often that I do this, but when Kay asked if I would knit up some yarn she had, I was more than pleased and wanted to make sure she would have some cosy socks as soon as possible.  Kay had learnt to knit with long needles which she tucks under her arms, so she is a very competent knitter, but just could not get on with short needles.  Kay is the leading light of our WI and runs our craft group..so I deemed it an honour in deed.  Here they are made to measure...standing on the tissue paper to draw around and measuring with a tape measure at our sewing group got us giggling.  So here they are, finished in less than 2 weeks. 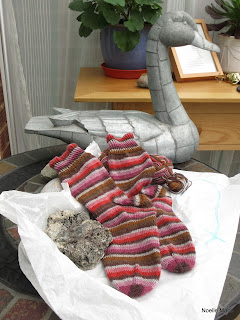 And here are the socks which were temporarily put on hold, but again finished a couple of days ago from another ball from West Yorkshire Spinners.  They give a needle size for 3.25mm.  For socks one uses 2.5mm, so that there is a firm fabric, which is comfortable to wear.    There is usually a problem with the colours after you have turned the heel, such that you almost get a strap effect...and I suddenly got inspired to remove some of the yarn so that the colours continue down the front of the foot in the same sequence, the bands are a little narrower at first since the rounds are longer at the instep, but I am much happier with this. 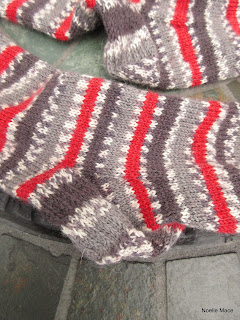 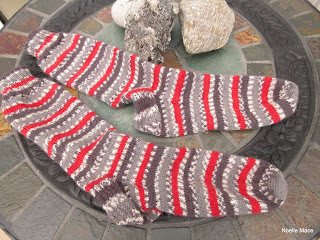 Sadly our WI is getting smaller and smaller, so are we going to have a big recruitment drive after Christmas.  This didn't stop the committee coming up with some great ideas for our December get together.  Instead of giving each other Christmas Cards, and also have the old Bran tub £1 present, this year we had a lovely range of hand made Christmas Decorations worked on by some members, and we put in a donation which is going to a local Charity. Pat also read a cherry Christmas Poem which had been read at the group meeting. 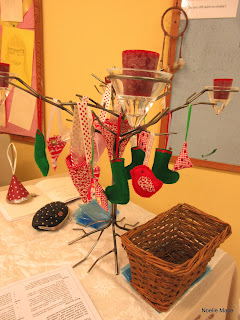 As well as news of our members who have moved away, or were absent, we sat in groups and had fun time making a hand made Christmas Decoration.  The Room which we share with many other groups is just the right size now after we were in the much larger hall.  We had bunting up marking our 100th Anniversary. 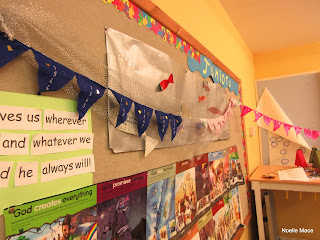 Our craft group had embroidered pennants with each year date, and each decade was a different colour.  It had decorated the Christmas Tree which our WI group had entered into the Christmas Tree Competition at St Nicholas Church in Kenilworth.  Kay who came up with the inspired theme, and led us in our efforts and Irene had set up the tree. 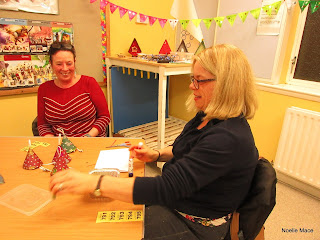 Just how much glitter and which colours to use...one of our member is driving down all the way to her French Home for the Christmas Break, with one hanging from her car mirror! 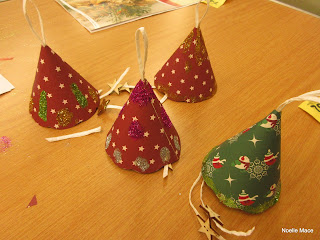 Some of us who had remembered to bring our Autumn Craft group projects, set up our Christmas Trees.  We had painstakingly made up the Christmas Tree boxes under Kay's direction...all starting with  shapes of card which we cut from cereal boxes, then with fabric, glue and curved needles covered the boxes and added some embellishments. 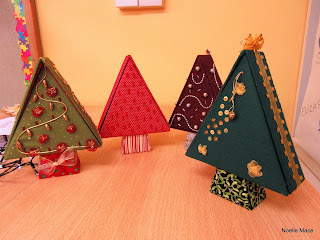 The two little miniature nativity scenes are so sweet.  Mine is the green one covered with mistletoe inside.  I had decided to use only material and bits I already had, and did a little ribbon work and sewed on some sequins.  To think that before I had joined this group...I had hardly done any sewing crafts! 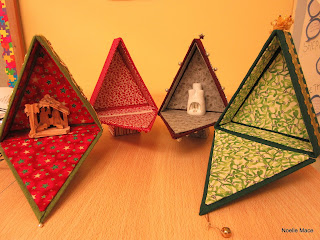