Piragi from the Book of Buns

What a great bake for these cooler darker days.  These tasty little packages of bacon and onion and wrapped up in soft golden buns are just the thing to have with some soup, or with a glass of beer.  The recipe for Piragi is on page 40 of The Book of Buns by Jane Mason.  She had enjoyed eating baked goods on one of her trips to Estonia, and I have also read that these buns are really very popular in Latvia too.  When we go on holiday I too cannot resist trying out the local bready specialities, and having tasted this one, I shall put the Baltic on my list of places to visit! 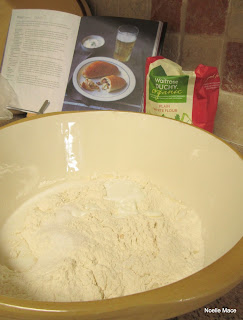 I found the dough quite dry compared with some, but this is necessarily part of the production of a firm 'pastry' like envelope.  Just after I had kneaded but yet to arrive at the other phases, I posted up a plea on the face book page, and received the reply that indeed this needs to be a firm dough.  I did need to add just a little bit of water to get the ingredients to bind.  As the recipe asks for plain wheat flour I used some of my Duchy White Organic Flour from Waitrose.

For the filling, I used the 670g Cooking Bacon packs of mixed smoked and unsmoked bacon  from Sainsbury's, which my son had introduced me to some time ago.  Of course this is more than is needed for this recipe, but the remainder is being used in various other dishes.  This is a real bargain and with chunky pieces, it is easy to cut them up into even sized pieces for soups, casseroles etc.  Just the smell of the bacon and the onion cooking off was a sufficient promise of the delicious buns we were to enjoy later.

With a little sour cream which I had to make by adding some lemon juice to some goat's cream, butter, and goats milk, added to the flour, yeast and salt, the dough gives a tasty dough which contrasts beautifully with the filling.  The recipe does give standard milk and soured cream, but substituting goat's products which suit us better, in no way detracts from the quality of the end product.  I was tempted to do my thing and add some herbs, and spices...but for this Book of Buns bake on page 40,  I needed to keep to the recipe. 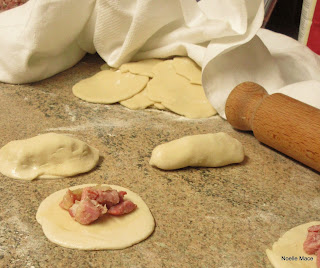 When the shaping was called for, Jane's clear instructions makes it easy to prepare the small parcels.  With 30g dough per ball, and just what looked like the right amount of cooked filling, I soon had a mini production line going.  The part rolled thin circles of dough waited their turn under my cloth, and filling between 4 and 5 at a time worked just right for me.

When they were ready to go into the oven, they got a double glaze...after I had glazed the 25 buns, I just went over them a second time, to use up the egg wash.  After about 10 minutes of the 15 minutes baking time, I swapped the baking trays around in the oven, to get an even bake. 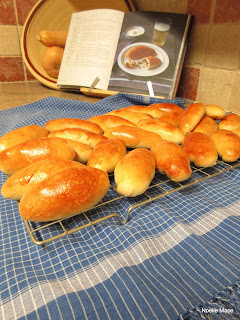 Mr S wondered when he was going to eat some...we had a couple each shortly after they came out along with a lovely bowl of steaming home make soup...delicious!  Needless to say most of the remaining ones went into the freezer.
Posted by Stasher at 15:27

Labels: Books, Bread, The book of buns by Jane Mason