There is nothing quite like the week when the roses are out ,to mark probably the best Summer week in the garden, and it all just about coincided with garden visitors last week.

1. I was not surprised that the Chiastophyllum oppositifolium also named Umbilicus oppositifolius attracted attention.  One of the visitors had already beeen given some plants a few weeks ago, and now I have several more people wanting pieces.  As in all small gardens, plants need resizing and I like to share, so it is a win win situation.

With its shiny fleshy leaves this hardy shade plant was lighting up the shady border. I found there was a variegated form called Jim's Pride. I am however quite satisfied with this one which originally came from Liz's garden in Kenilworth.

2. Also along the shady border, another carpeting plant was in full flower, though it is also very attractive when it is only showing its rosettes. There were a few takers for this one too.

3. Roses Grace of which I have two plants in the Conservatory Border are bursting into bloom. 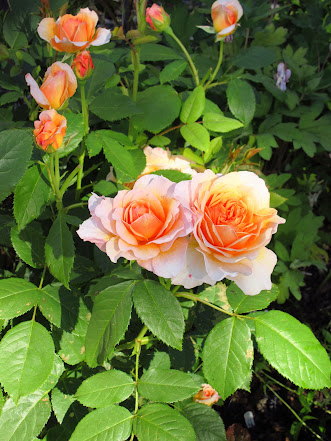 and just above the Saxifaga, Rose Ghislaine de Feligonde is full of large bunches of small blooms.  Those are open and much loved by bees...

Further along, now with many stems of simple open roses is Rosa Open Arms. At least one visitor will be returning in a few weeks time to take some cuttings.

I have greenfly on the rose buds this year, but am leaving off spraying as we also have lots of emerging predators, we shall see if a reasonable balance emerges. There are of course lots of ants farming their little colonies.
4.  Because the flowers were dripping nectar, this conservatory succulent has been moved to the hot sunny table.  A winter of low, but frost free, temperatures may have encouraged every branch to flower.  This is form of Cotyledon orbiculata has a heavy bloom with gives it a silvery colour. 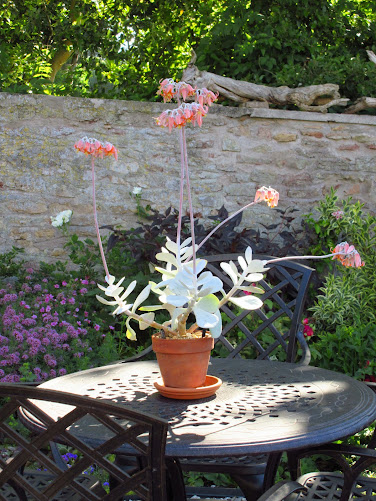 The coral coloured flowers are an added early eye catcher this year.
5. Over in the small veggie patch, the courgettes are settling in nicely, female flowers are forming early this year.  Maybe it is the cultivars I am growing, or maybe the weather conditions.  One of our favourite chutneys is the courgette one I developed some time ago.  I do like to pick them small, so four plants two each of yellow Atena Polka and compact Patio Star, both from Moreveg. 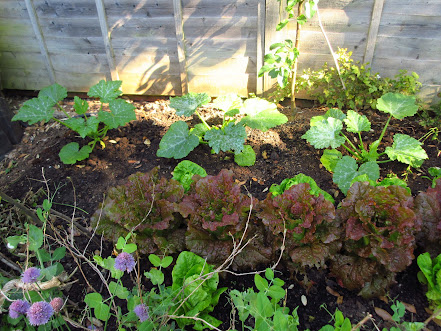 I dug up one of the garlic bulbs, but I felt there was at least a couple more weeks of swelling up requited. The tall white sugarsnap pea growth started to look a little unhappy, so I have made picked all the pods and ditched all the plants.  The little row of dwarf peas were completely unaffected.
The chive border also is having a revamp.  I've cut down all the growth, and will be replanting smaller sections. I have dwarf french bean and runner bean seeds germinating in pots and ready to take up vacant spaces as they occur.

6.. The Nasturtiums are out, including some new 'Orange Jacket Pocket' ones.  Some of them may well be from Nasturtium Orchid Flame, but aren't they magnificent and summery. Our salads are going to be very attractive this summer. I pick them early in the morning as a kitchen posy, and add to garnish our lunch time salad. 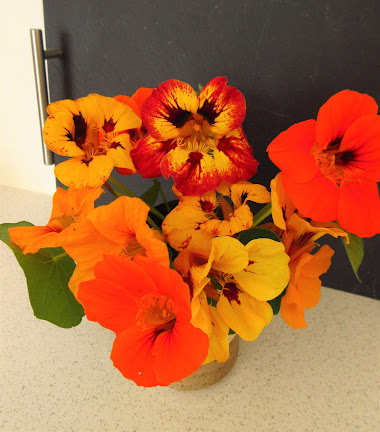 As usual I am linking in with Jon, along with some others, to share six from our gardens.  He still seems to have a shed load green house full of plants ready to go out into the garden, he'd better get trotting with those.  However since he has been running for miles and miles, I'm not surprised at this.