1.  This little Primula juliae White Wanda, or Primula 'White Wanda', or even Primula x pruhoniciana 'White Wanda'  has been in flower since December and even the divisions made then have been in flower since early February.  I can now see some little patches where other divisions will fit nicely, but there are other plant fairs coming up, and maybe new primulas will be establishing themselves ready for next year! I shall be at the Bishop's Palace in Wells this Sunday, and next week at the HPS spring plant sale at Yeo Valley Gardens helping out for most of the day. 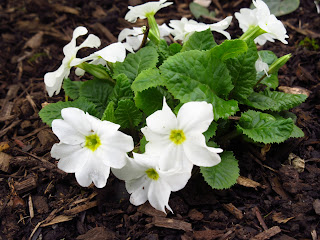 2. This week a question of the correct naming of the little primula I took to my gardening club to use to demonstrate the technique of division. I had the name Primula 'Wanda' but the speaker corrected this to Primula vulgaris 'Wanda'. That led me of course to doing some more research on this which is always interesting and found that it is not wrong to write Primula 'Wanda', but putting in 'vulgaris' is wrong. I learnt even more on the way about primroses but not nearly not enough. Any suggestions of good books on the topic? 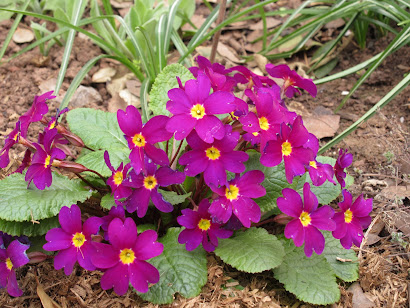 I found out that Wanda arose as a hybrid cross between P. juliae and a crimson form of P. acaulis which resulted in ‘Wanda,’ it won the Award of Merit in 1919, and was described as ‘the most striking of the many hybrids so far exhibited’. Doretta Klaber said ‘Wanda’ is ‘bright and glowing, like a glass of wine seen against the light.’ The vigour, floriferous habit, rapidity of increase, tolerance of sunlight, and attractive colour of ‘Wanda’ led to its extensive use as a breeder’s plant, and eventually to an entire strain of plants now called ‘Wanda Hybrids.’
This is a picture of one of my plants in the garden last year.
I have blogged on this plant on my garden several times, and I particularly cherish this one as it was given to me by a very good friend Kay.
All these juliae types are very easy to divide, just lift part of the plant, break bits off, repot or replant in the garden, watering them well in.
You don't however need to know the correct botanic name to see love and enjoy a plant.
3. If that plant never had a PBR or PVR and may be propagated freely and sold, Alstromeria Indian Summer does have one. PBR: Plant Breeder's Rights or PVR: Plant Variety rights cannot be legally propagated for profit without permission. This is a link to Plant Heritage which explains the situation.
In September 2020 I bought a small plant of Alstromeria Indian Summer from the Rare Plants Fair at the Bishop's Palace and had planted it up with good compost in one of the larger spare ceramic pots. It had done extremely well supplying many flowers for friends and for vases at home. Its high price really was a bargain considering the amount of blooms which started in April and went non stop till December.
At the HPS meeting last week, the speaker mentioned this Alstromeria, and I whispered to Brenda that I had it, and it was agreed I would give her a piece when it was divided. On Thursday I decided to lay out the big plastic sheet over the gravel and get to grips.
A nice little job before lunch I thought. The plant was crammed full of roots, and with so many shoots too. 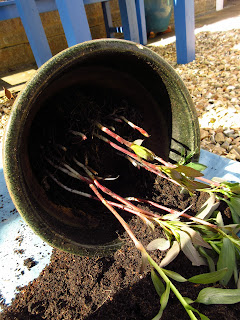 It took all my efforts just to get it out of its pot, using a large bread saw, I reserve for these jobs, it just would not get out whole and I had to carve out pieces. After a rest I found pots to to temporarily house the divisions, with good compost and feed of course. I think replanting every other year in pots is a must from now on. I was therefore very pleased I did the job now as one more season would have meant having to break the pot. 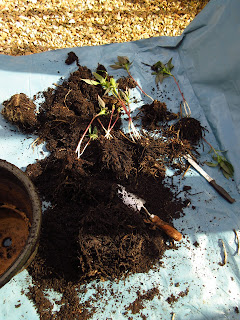 Having seen its growth in the pot I am wondering about the wisdom of growing it in the open ground, as I am concerned about it being 'invasive'. Any thoughts on this would be much appreciated. I know Jim has grown this one too, so I hope you can give me and others advice on this.
4. I hadn't realised that Salvia Amistad had a PVR too: having given away all the surplus plants last year, rather than sell them at my gardening club, I am pleased to say I have not broken any law or regulation. Rather than seeing PVRs as a pain, I am embracing this drive to make us gardeners generous and just give plants away. Now could I say the the plant is free, but I would like a contribution for the pot and compost? Now that is stretching it at club meetings I think. I'll find other plants to sell and give PVRs away. 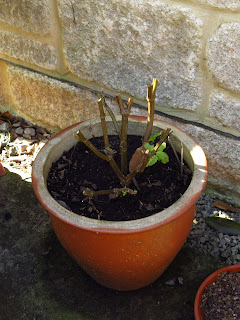 Salvia Amistad has had her trim and will be replanted with fresh compost, or if Mr S starts to count the pots, a space somewhere out in the garden may be found.
5. The plastic was out, and I remembered someone last year had much admired the
Sorbaria sorbifolia 'Sem' and I similarly attacked that pot. I had bought this plant too from one of the Bishop's Palace Plant Fairs. It felt hard to do this when the growth was looking so beautiful.
Its roots had coiled round and round, with shoots coming up at intervals. This time, I just planted up one section to give away and repositioned the rest in the same pot with fresh compost and granular slow release fertilizer. I cut some of the roots, so that I could more easily repot it with the stems nicely spread out this coming autumn. This would have been its fourth year in the pot, so it was ready for a 'rejuvenation'. I've not tried root cuttings, but looking at the shoots coming out of the roots it ought to be a contender, and I may just practice on some next time. I don't think I would ever release this one into the garden either, and I have found that this is another one with a PVR! 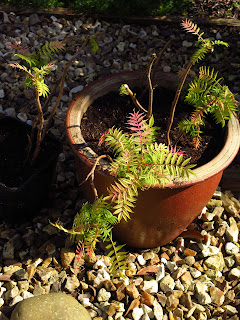 6. Another miniature Narcissi is looking very pretty this week. Bought at the top range of what I usually spend!
but then I spied a 'free self seeded' deep purple violet, seed of which must have taken a ride in a pot which had some of the garden soil from my previous garden! We had a thriving Kenilworth in Bloom plant sale each year where in addition to buying in annuals and hanging baskets from a local growing, one friend used to propagate some wonderful plants to raise funds for work. This is probably Viola labradonica and probably came as a ride in the form of ant sown seed in one of those pots. It is thanks to Brian to replied to my question yesterday on the gardening Facebook page. 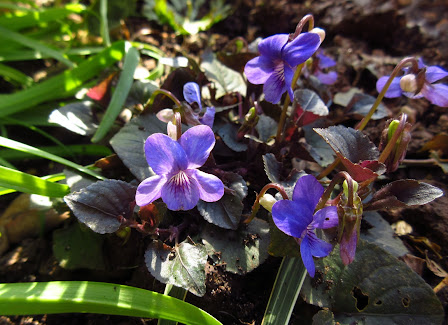 With all this lovely weather this week in the UK, plus of course some rain I am sure there will be some great posts from some of us that join Jon the Prop who thought up this great Six on Saturday garden noticeboard. It is always interesting as well to read posts from several other corners of the world.
Posted by Stasher at 07:04