In a Vase on Monday - Apprentice Pieces

Just in time to get this posted on Monday...and that is the only true attribute about this entry.  Cathy is quite liberal about the rules...she just wants us to keep going, and even if we don't post, the regulars love to go any time of the week, to see what other have been posting.  So do start with Cathy's memories of her Grannie. 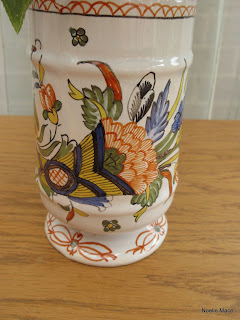 The 'Vase' is a tankard...A very lovely one, hand painted but by an 'apprentice' so a bit wobbly in places.  This was given to me by my little sister Jenny, on her return from France.  For her year 'in the field' for her degree in French, she taught in a School in Rouen, and felt her finances then, could not attain the heights of a master's piece. 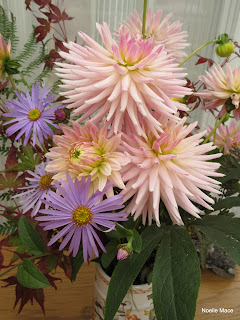 Jenny loved the Dahlias at the local shows, and I have been keeping the best for this vase.  I love this tankard, and it sits on my desk usually full of knitting needles.

The arrangement was not made on Monday but Saturday.  I have made one today with similar flowers, but for the one I am posting here, I had my 'apprentice flower arranger'.  Izzi loves the garden, and flowers, and as soon they arrived, I had Izzi in the garden choosing flowers, and having cut them, I handed them to her to put straight in the bucket.  We talked about putting different flowers together, and also using foliage.  We chose some green and some lovely leaves from an Acer which was just begining to turn.  The secateurs were a little too large, but with scissors she looked for some for her posy. 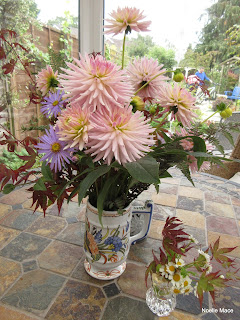 The other reason I wanted Izzi to help is that I wanted to share with her my tradition of making arrangements for people's birthdays...and Saturday was 'Great Aunt Jenny', the giver of the tankard's birthday.  As she is abroad we took the pictures, and posted on facebook.  I then explained to Izzi that we then need to think of someone to give the flowers to, and we decided they would go to her Mum.

Here is Izzi, with her very own first 'In a Vase on Monday'. 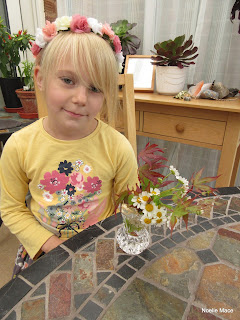 We found a lovely little very heavy cut glass vase in my cabinet, and now Izzi has that to use in her bedroom for little flowers.  We also picked some nasturtium seeds for her to grow next year.  You can see that I am taking Grandma and 'Teacher' of In a Vase on Monday, and flower grower seriously
Posted by Stasher at 19:28

Labels: Family, In a Vase on Monday