Meloui is a delicious pan cooked small bread, made with semolina, and with a careful technique of folding, forms a delicious flat bun or 'pancake' with flaky components.  Jane Mason collected this recipe when she went to stay with friends in a little house on a beach in Morocco.  This is the latest Bake from the Baking through The Book of Buns on Facebook, which brings me bang up to date.

We've been to Morocco twice, and looking back at our photographs, I found the one which shows some breakfast breads we had at a 'farm hotel'. 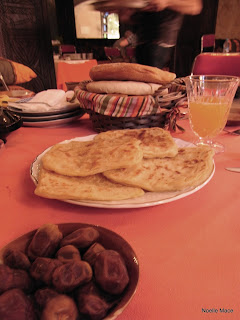 I know that one of the guides was really proud of the semolina flat breads in the basket, and now I am sure that they must have been Meloui.  I think it was his Mum who had made them.  We had a selection of freshly prepared breads, orange juice and orange blossom honey, and dates from the farm.  Wish I had asked to go and see the kitchens.  Many people still speak French in Morocco, so I have enjoyed speaking with Moroccan stall holders.  This is just one of the pictures of the many Toroudant Bread Stalls, which I took. 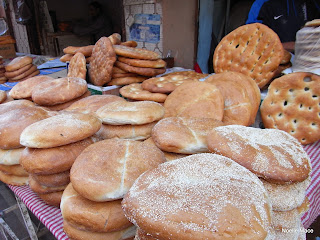 I am a bit of 'pest' sometimes, as before I make something, I like to find out a little more about it, and get influenced to change things a bit, and sometimes veer astutely from the recipe or technique.  Mostly I have been straight forward and not researched until after I have baked as far as The Book of Buns is concerned.  However I was tainted in advance of baking the Meloui.  If you want to follow the technique as per Jane Mason, then only look at the technique on youtube after you have made your first batch.  I am sure there are many ways of making buns, after all just how many techniques and shapes are there for scones in England? 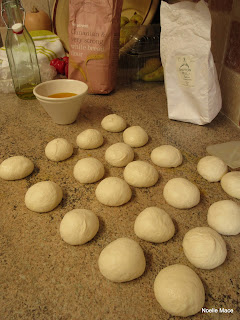 I had a bag of organic semolina flour from Shipton Mill, which I had been using to spread on baking sheets, and coating muffins, but now I would be able to use it in a bake and taste its lovely flavour.  Of course, there is white bread flour too, as well as the semolina.  For the filling instead of butter or olive oil, I used my lovely Wharfe Valley Extra Virgin Rapeseed Oil.  I found that by smearing the worksurface in a little oil, I could stretch out the dough, fold and shape it easily.  I ought to have made a second fold to make them a little less high...but then there is nothing like hands on and making ones own mistakes, to arrive as the perfect shape!  My special Huckaback linen towel which I use for covering my bakes is now soaking in some detergent to remove the oil.. 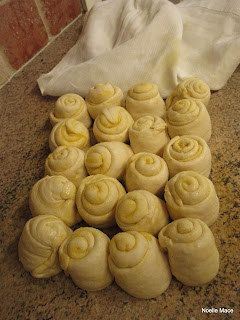 I did not use anything like the amount of oil stated in the recipe, so if using oil, put about half in a shallow dish to dip into, and top up if necessary.  But then maybe the remainder would have been used in the frying pan if following the recipe.

A careful rolling with the rolling pin means that you keep the circular shape, something I got better at towards the end.  I chose to use a griddle rather than a frying pan, as I wanted to keep the oil to a minimum, and had room to cook 6 buns at time. 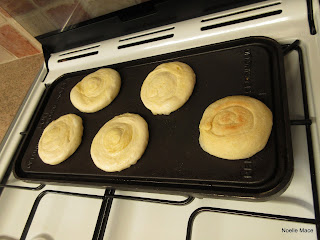 Penny and little Daniel arrived during the rolling up process so they were my first tasters. 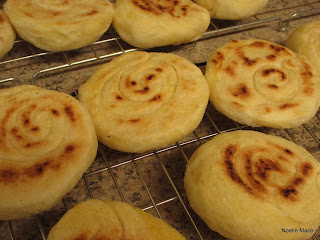 As soon as the last one was off the griddle we sat down together in the conservatory, with honey, butter, strawberries from the garden, blueberries and a nice drink.  The Meloui are really delicious, and so much like the ones we had on our trip from the cruise ship.  We had one each warmed up again for breakfast.  This time I put some runny honey in a little dish, and dipped 'peelings' of my bun into it.  With their swirls and layers....they make lovely tactile finger food for breakfast or with mid morning coffee.
Posted by Stasher at 11:03