Tidying up in the Garden

With rain forecast, I grabbed what I thought would be half an hour or so, to go and clear some leaves off the heather bed, and I ended up spending a couple of hours clearing up some of the old debris in the back garden.  I have already noted a couple of plants which need moving, and now that the green bin is full, its time to come in.

One of the bonuses from my stint in the garden this morning, is that I found a couple of name labels for the two Dahlias that I planted this year.  I had some queries about the blooms' names in my vases which I posted during the Summer, so here they are:

Dahlia Phil's Kelpie was the first to flower.  It was smaller than the other Dahlia, and had loads of medium sized blooms. 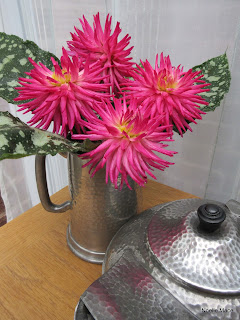 Taller was the upright and strongly growing, and very pretty Dahlia Kiwi Gloria.  It is classed as Small Cactus. 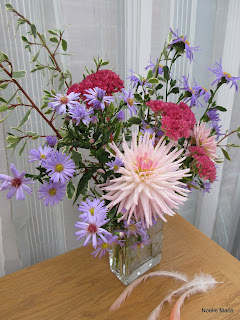 Again another very floriferous specimen, a little later to come into bloom.  I guess I could have grown huge blooms if I had disbudded, but I love smaller flowers.  The colour is exquisite and goes well with blues, whites and violets. 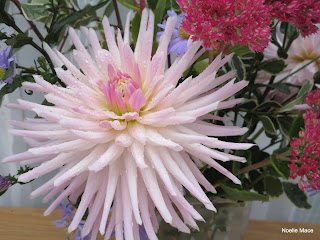