My little apple tree is still thriving.  It was first planted in December 2016.  Last year it bore 2 fruit having been severely thinned down.

This spring the flowers on Apple D'Arcy Spice started to open around 20th April 2019.

All the flowers set, but I thinned them down allowing just six fruit.  We have no other apples in the garden, but there is another apple tree about 25m away, a cooker of unknown variety. 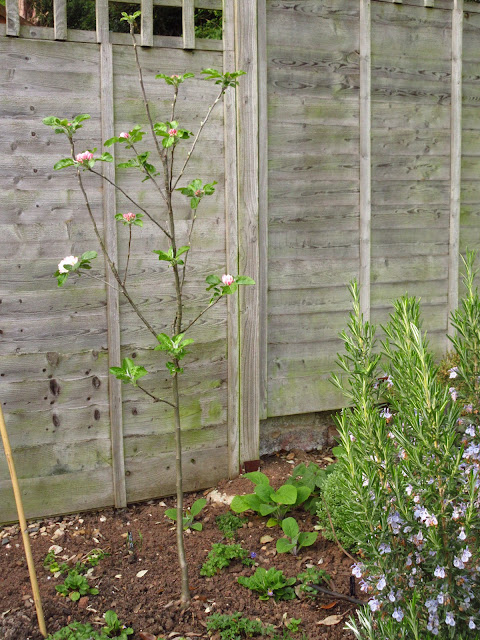 A warm and sunny summer, with low rainfall was followed by an exceedingly dull and wet autumn .  The tree was heavily watered about every two weeks during the dry spell, but would have had water from the watering of the French Beans growing nearby, as well.

Late October sunshine on the tree shows up the wear and tear and damage to the leaves from some sort of mining moth probably Apple Leaf Mining Moth.

Earlier in the year, one stem only was infected with black aphids, with their black ant farmers, and was regularly washed off or crushed.  In the end, I cut off the shoot as if to summer prune.  No further parts were affected.

The apples when growing on the tips bend the branches down.

A full tree picture shows that the main stem is still relative thin.  The tree is unstaked and in a sheltered position. 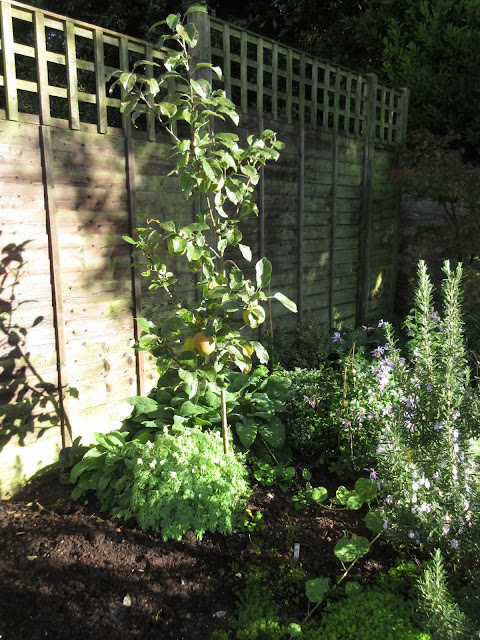 During the end of October and Early November there were days of high winds.  On 3 November one apple was found to be missing...and had had a soft landing, unblemished.

Ahead of predictions of severe gales the remaining fruit was picked.  The fruit did not experience any frosts in that time.

All the fruit were sound and in good condition.  wrapped in paper and now stored in the shed.

I have since read that fruit have a strong stem, and can resist strong winds....they were still fairly difficult to break off, and so maybe they would have been better left longer.  As we have mainly dreary and wet days, with little sunshine predicted, I decided to pick all the apples on 8 November.