Although we have yet to have a frost, and have had as much rain as we can absorb, there are signs that autumn is advancing, and even that winter is not far...the Amalanchier leaves remained in colour for only a week before they fell, all whilst we were away.....

The Prop had been very industrious this week, and also mentions Salvias which I almost included this week.  Its really interesting to see what others who congregate under the Prop's shelter have to offer....

The first of  this week's SOS is a shot of the lovely reddening leaves  on Euonymous alatus compactus.  I love this shrub as much for its corky winged stems.  The only downsize I can see is that it doesn't grow fast.  I had cut a stem to put in a vase some time ago, and it is yet to make a replacement.  The leaves glow in the low sun and contrast well with the wall behind.  We have a few hedgerows going down from the Mendips onto the levels not far away with several Spindle trees growing, and I love to watch out for them...maybe they will have to be source for my 'trimmings', at least until my little shrub fills out. 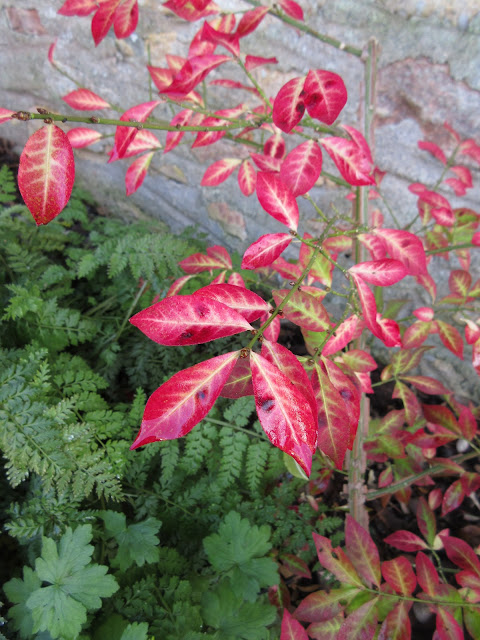 With a little judicial cutting back of growth in the foreground, (2)the fading flowers of the Hydrangea are now on show, and adding some more late season colour. 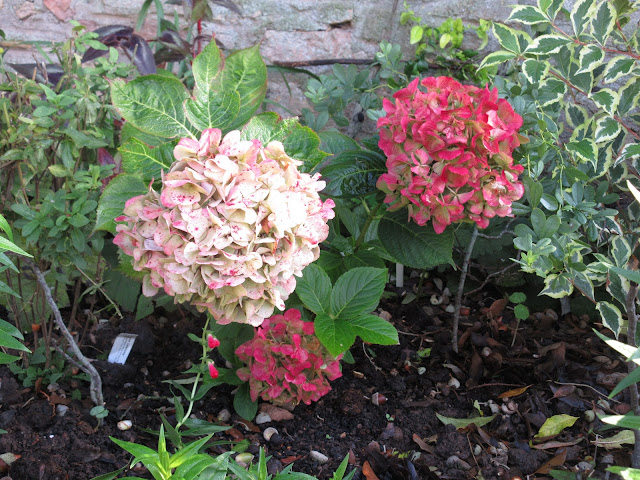 Fuchsias around the garden seem to be growing still and flowering non stop....(3) Fuchsia microphylla 'Silver Linings' having started off late, more or less from ground level, is elbowing surrounding plants aside! 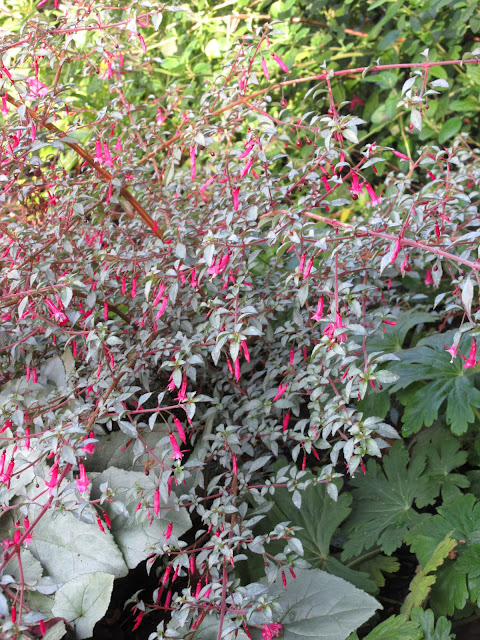 How the next plant manages to thrive rests on it being very pretty almost all through the summer, with its dainty almost aqua leaves, and being one of Mr S's favourite.  I make the greatest effort to keep it away from slugs, by placing it on a high shelf in the garden, and checking almost daily.  It also needs turning to keep all the stems falling evenly around the large tall long tomb in which it is growing. If it wasn't for the fact that he mentions several times a week how nice it is....it would slowly have been left to the slugs a few years ago!  The only way to protect it would be to have the drainage pot filled with those little blue pellets....but I have given up on them since wanting to attract wildlife to the garden.

After August I just keep hoping it will flower early...but whatever the conditions it always lives up to one of its names: October Daphne! Its new name is (4) Hylotelphium (Sedum) sieboldii.... 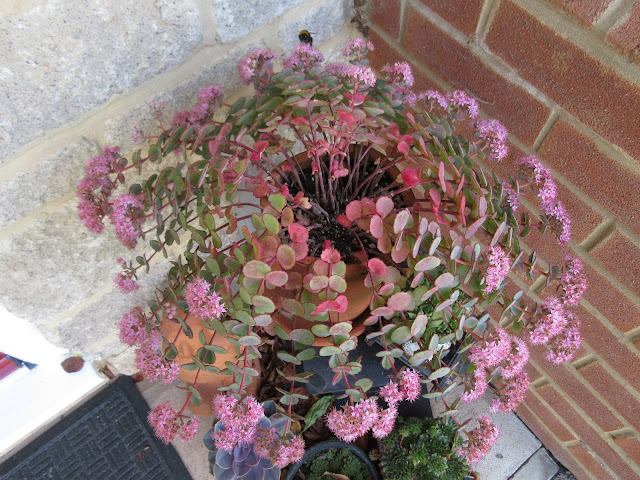 Late foraging bees come to it around the day. 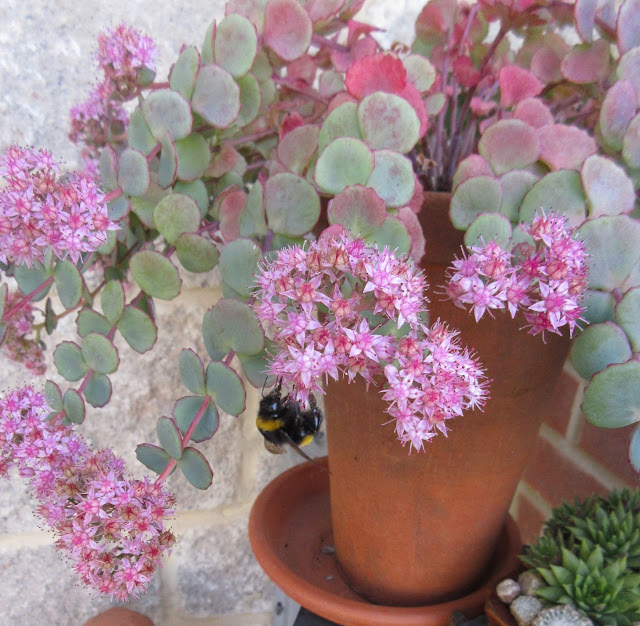 Earlier this year I acquired some tiny seedlings of (5) Corydalis  ochroleuca aka Pseudofumaria alba. They have grown well and have found rounded mounds..... 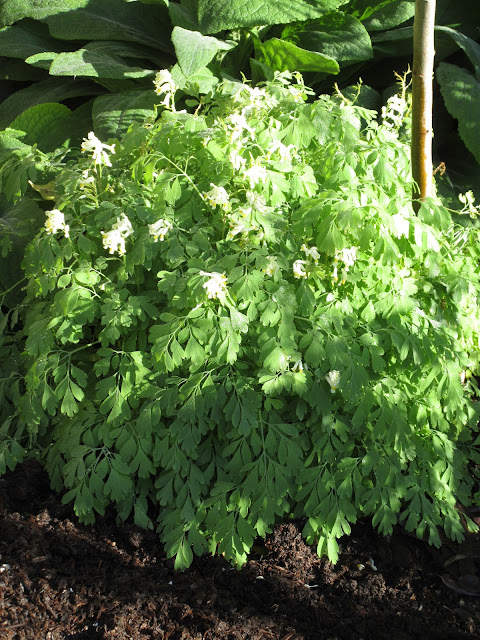 Late in the year they offer fresh ferny looking leaves and continuing creamy white flowers with continuing nectar for insects.

Another plant masquerading as a fern is another Corydalis: (6) Corydalis cheilanthifolia.  After getting this plant earlier this year...having seen it growing as a 'weed' on top of a container...and begging a piece, I googled it and found that The Frustrated Gardener admires it too:


"The one I covet most is Corydalis cheilanthifolia, pictured below in the Cottage Garden at Sissinghurst, a plant one might easily mistake for a flowering fern, if such a thing existed. The leaves are finely dissected and flushed with red in spring, whilst the flowers are produced in thick, upright plumes of canary yellow. Quite a sight, even in the most exotic of gardens."

Here it grows by the wall forming good ground cover contrasting well with the Euonymous. 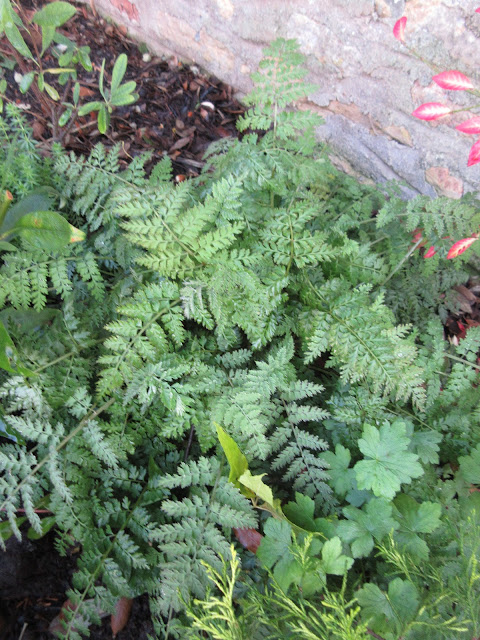