Wet Saturday in the Kitchen

On Friday,  we had a little turn round Shepton Mallett..and had coffee and tea and cake at Loaf.  The lovely sourdough in the window was the thing that attracted us in.  However Mr S's cinnamony chocolaty bun was a total failure.  I had taken one look at this and thought NO!  We have come up with a code:  in future he is going to say to me before he makes up his mind: "Do you think I would like this?"  If I say no, it means it won't be any good!  The bun was a bland colour as if it was only part baked.  It turned out less than cooked, and the dough was not an enriched one at all.

Saturday was a complete wash out here...so a little baking therapy!  I just love Almond Croissants, but don't bake these feeling that croissants with all their butter and time taken over laminations require too much exercise to work off the calories.  Last time I made them was 2013.

I made an enriched dough, using goat's butter and milk, eggs etc and then made up an almond and pistachio marzipan to stuff the brioches dough.  Leaving the shaped buns to rise overnight in the fridge meant they were baked this morning.  The pistachio slivers were added five minutes before the end along with one of the layers of sugar glaze, and this way they don't get scorched!  Some for neighbours and some for the freezer too. 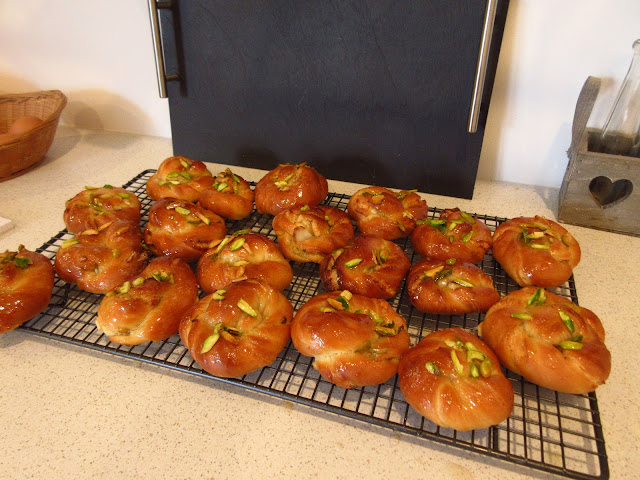 Another time I would allow the bulk rise overnight, and the shaping in the morning.  This time the fridge was so cold, that the shaped buns needed another three hours rising after coming out of the fridge.
Posted by Stasher at 17:55