Thanks to Mandy who sent a 'surprise' gift of Honey & Co: The Baking Book, I set to to bake a delicious sounding recipe.  I had picked up a whole tray of Blood Oranges up at Wells Fruit and Veg, and with all the other ingredients got cracking.

My dilemma was as a result of not having sufficient dariole molds or large muffin tins, and thought I would make half the quantity and bake it as a whole cake.  Mandy had warned that she had problems releasing the cakes, so I made sure to butter the cake tin really well and also line the base with parchment.

As Mr S said, if this had been on Bake Off,  it would have been tears!  Several of the orange slices stayed in the tin, but these were quickly put back onto the cake, and the middle was undercooked, something which was only noticeable when it was sliced. 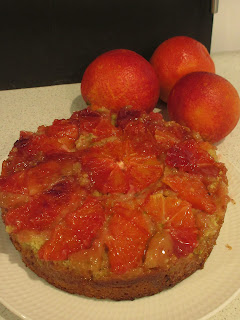 However, it was absolutely delicious, served with more sliced blood oranges, and a dollop of yogurt. What would I change for next time?  I would not put so much sugar and cornflour on the base of the tin, but make a syrup to pour hot onto the cake when it was baked.  Bake the cake at a 10 C lower and for longer, and glaze after the cake is turned out as it is cooling.  Make two: one for now, one for the freezer.

The poorly baked middle was cut out, and combined with an egg, some milk and large raisins in marsalla, and made into a baked hot  pudding, which was absolutely delicious.