After a run of warm and cloudy weather, we have bright clear skies, and a northerly breeze, so although we still haven't had a hard frost, I thought it precautionary to cut some material from the garden yesterday afternoon, and they stood overnight in a bucket of water.  I had fully intended getting some gardening done after that, but it was too cold for me.

The vase was quickly assembled early this morning and photographed in the living room with natural side light.  With a westerly facing window the light gave soft shadows. 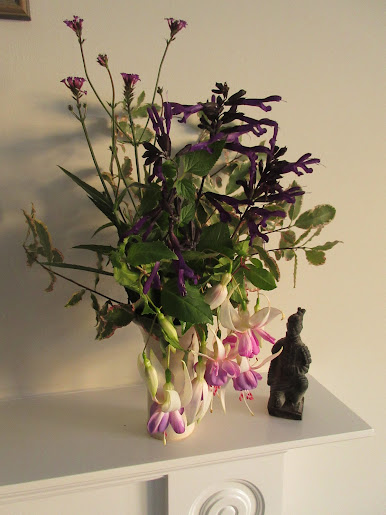 In the frame but out of focus is another of the smaller terracotta soldiers picked up all those years ago when we visited the archaeological excavations, where we met one of the old farmers who discovered this wonder of the world.

Inside we have continued to enjoy last week's Salvia Leucantha, with the odd shed of petals. 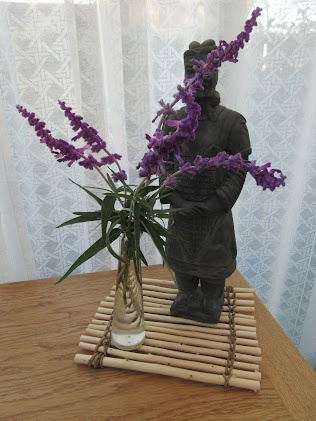 Again with a larger standing terracotta army soldier figurine.  We bought from a farmer who made these in his garden.  We were directed to only buy from the official shops.  However I felt that this enterprising chap would be my source.  The guide was able to translate for us, but his advice was that these handmade soldiers would not last.  I have had them for 25 years and the tall soldier was even in the garden for several years.
It is always a surprise to see what Cathy will have posted, so I am joining her, together with other gardeners and flower arrangers. Do go and have a peep, or even join in.