During the Summer several artists' galleries were open, and I visited a number of them in Kenilworth.  I was impressed by the variety and skill of the artists, and planned to go to some workshops.  I've been to a felting workshop, and then last week I went on a button making workshop.

Above the beading shop in Kenilworth I visited 'Gallery 25' in the summer, and there met Helen Clues.  I love buttons and a couple of weeks ago signed on to a Friday workshop. 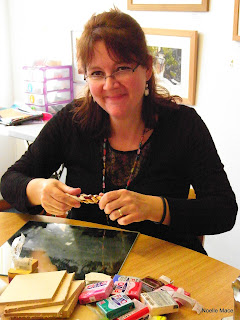 I was introduced to Fimo, and some of the techniques.....I loved it, what a range of colours to choose from, and under patient guidance, I found I was enjoying just watching what came from different twists and turns. 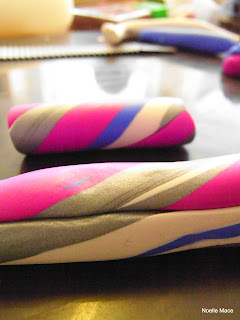 During the morning of  mixing, twisting, and rolling I devised or rather the  patterns emerged, and I made little ou and ah noises and loved the black and white mix looking like marble 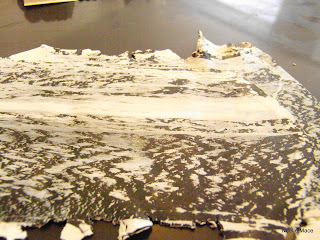 With tools and cutters, I have a nice range of buttons to bake...for The Great Kenilworth Button Bakeoff...... 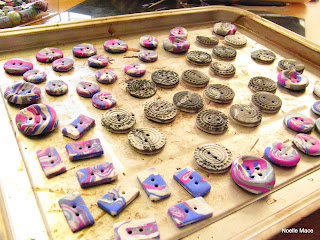 Sally Clues was also at the class and I enjoyed listening to her chatter, and to spend the morning with a girl who knows where she is going

....taking after her charming Grand Father, who is musical, she is going to study music and wants to be a top musician.  Sally I meant to say that I was sitting as close as I was to you, to another great musician at the start of his career:  Jamie Cullum, when he was singing at an intimate venue seating about 12 couples on a Valentine Nights Dinner at The Papillon Restaurant in Swindon.  He was just starting off and still at College.  His singing made the hairs on the back of my neck stand up, and I went to chat to him and said that he would go far... 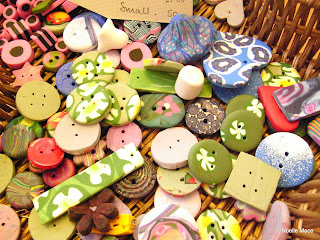 There are lots more techniques, and here is a little taste of buttons made by Helen.  The studio is light and airy, comfortable and warm, and there was a lovely selection of music playing in the background, with lots of pretty artifacts around to inspire.

When I got back home, I played with my left overs, and had a go and made more buttons including some toggles....
Posted by Stasher at 13:42