The first time I visited  the Pump Rooms in Bath, after a tour of the Roman Remains, and Georgian Baths, I stopped in the tea rooms as there was a band playing.  Tea and Bath Buns were ordered.  We had a pleasant view of the large room, and were enjoying chatting, then for a few minutes pure silence on my part.....I was savouring the delicious softness and flavour in the Bath Bun.  After that if we had any visitors or family staying, and wanted a ride out, we would go to Bath, and whilst our friends toured the Baths, we would have a first sitting of tea and buns and newspapers, and later a second helping with our friends.    Its quite a few years since our last visit as we now live too far away.

Bath Buns come in various sizes, looks and flavours.....ones in the shops do not look like the ones in Bath or ones in Bakeries...those are rounded and smooth, whilst the ones in the shops and some recipe books are raggedy. They usually have an egg wash and crushed sugar on the top.  I must have subconsciously had a yearning for a Bath bun, as I had only recently ordered some nibbed sugar. 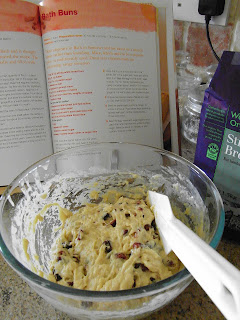 The recipe I chose for my first batch of Bath Buns was From the Women's Institute Bread Book by Liz Herbert.  As I read through the ingredients I knew I had everything, so Friday Buns just had to be these.  The main flavourings were sour cherries, roughly chopped, raisins and mace.  It starts with a batter, then all other ingredients are added and the whole lot given a good 'beating' with a wooden spoon.  The dough is too slack to knead, and I have no dough hook.  Lovely for toning the upper arms. 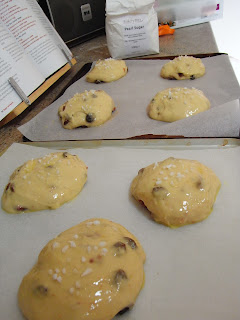 The recipe says to place seven large spoonfuls spread well apart....next time I shall place eight spoonfuls well apart, as they came out really quite a bit larger than I wanted, and seven divided by 2 leaves an odd one out!  When they were baked they looked half raggedy and nicely round at the same time.

What the recipe does not describe is the wonderful smell given off by these buns, Mr S knew he was in for a treat when he walked in from work.  Mace is the spice and the flavour I could taste in those buns at the Pump Rooms, it filled the house with rich and warm smells, and quite dispelled the damp and gloom outside.  There is nothing quite like drawing the curtains on a Friday evening, and sitting down to a nice cup of tea and freshly  baked bun as a start to the weekend. 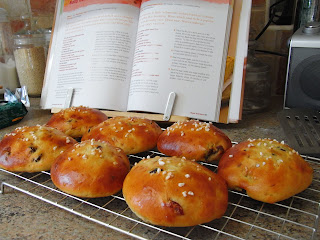 I froze four of the buns, which were defrosted and warmed a couple of days later, tasting just as if they had been newly baked.
Posted by Stasher at 10:55