Another recipe from Mary Berry's Baking Bible, and made late Sunday ready for yesterday when a group of knitting friends were coming round.  I decided biscuits were easier to eat if touching yarn, books etc.

With the butter weighed out and at room temperature for an hour, it still was not soft enough.  The recipe says measure the butter, sugar, egg yolks, vanilla extract and flour into a mixing bowl and beat together to form a soft dough.  I could see the kitchen covered in flour and bits if I used my hand held mixer, and I did not think the wooden spoon would made an imprint in a month of  Sundays.  I remembered Paul Hollywood getting in there with his hands on one demonstration and Mary giving him the sly look, so divested of rings and watch, hands and nails scrubbed, I went in there, mixed the butter and sugar a little with my hands, then the other ingredients and it was a dream.  Best of all no noise on a nice quiet Sunday evening. 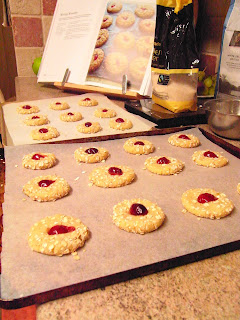 I used half the quantity: 4oz butter, 3 oz golden caster sugar, 1 egg yolk, some vanilla bean paste, 5 oz of self raising flour, and 1 oz porridge oats for rolling, and some cherries for the top.  I still got 21 biscuits.  They are delicious biscuits, melt in the mouth, with the flavour of the butter coming through nicely.

I watched the biscuits carefully whilst washing up, and then allowed them to cool on the baking sheets till they were firmed up, then transferred them to the rack to finish cooling. 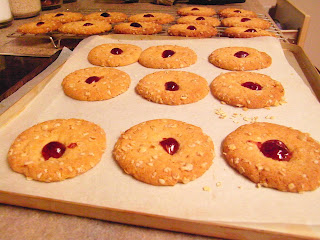 When Mr S made me some Viennese whirls last year, he kept checking them in the oven for crispness and nearly burnt them, those too are soft even when they are cooked, then firm up as they cool.
Posted by Stasher at 10:12