With every episode of the Paul Hollywood and Mary Berry Masterclasses in the can, watched at least once, and referring to various Baking Books, including Paul's How to Bake, and the New Showstoppers, I really thought it was time to try a plaited loaf.  Mr S fancied a white loaf and with my enriched white dough which includes milk, egg and butter, but no sugar, I thought I would make a plait.

Looking at Paul's eight stranded Loaf, I felt it was a little too wide, and not high enough as I needed the loaf to make sandwiches.  I had plaited the eight plait so many times in my head, that when it came to thinking about plaiting with four plaits, I just could not think how to do it.  I checked my baking books, and found that Linda Collister's Bread from Ciabatta to Rye gave the best and easiest explanation.  BUT I just could not visualise it, so during the proving of the dough, I practised: 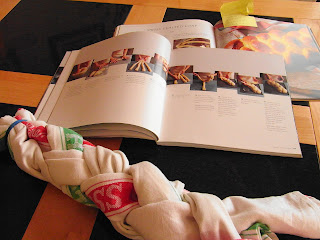 Of course I used Paul's tips about the rolling, and bursting of any potential bubbles. 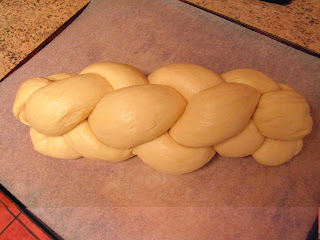 Across the baking sheet, the loaf is ready for the second rise, and with egg wash just before going into the oven, 35 minutes later, voila..... 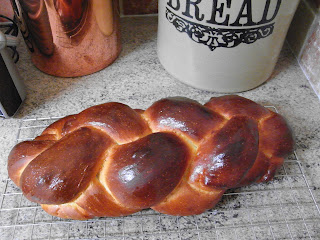