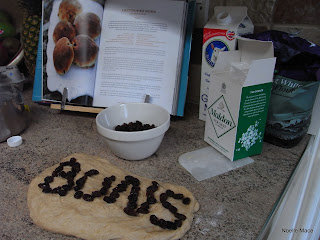 Usually Friday is bun day....when I decide which buns to bake, and hopefully get some ready to eat for when Mr S comes home...  but this week I was making buttons, so Saturday with its wind and rain became baking day instead.  There were no buns left in the freezer from previous weeks, and just half a granary loaf between us and breadlessness.
I was reading a blog which detailed a raisin loaf, and which also mentioned The Handmade Loaf by Dan Lepard.  I've had this book for ages, but somehow have not bonded with it, but non the less decided to get it out and have a bash.
I've followed Dan's technique, but have 'tampered' with the ingredients, and the results are worth it.  We could not resist a slice with a glass of milk for supper on Saturday.....what with baking this and the plain white loaf as a special request from Mr S, I had not got round to making dessert... 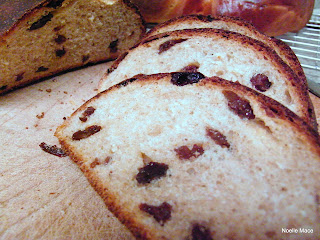 I had already soaked 200g raisins in a good slosh of Marsala wine, which was going to be baked in a cake....The loaf turned out really well, light and tasting just mildly sweet, and only in need of a light thin slice of butter with coffee for breakfast this morning.

Put the yeast to froth in a jug with the warm water, and 1 tsp sugar.  When frothy, whisk in the olive oil, and the marmalade.

Weight up and mix all the other dried goods, then into the centre pour the yeast concoction, and the sourdough.

Stir with fingers till it comes together.  Leave for ten minutes, then come back, knead on an oiled bench for 10 seconds, return to oiled bowl, and seal under clingfilm pulled taught across the bowl like a drum.  Go and do something, then come back and repeat again, then leave for ten minutes and then do the same thing again but adding in the soaked raisins which takes a little longer.  Leave at room temperature about 2 hours.

Knock back gently and form this into two free form loaves, one of mine was destined for the freezer for another week.

When well risen it will be ready to bake at No 6 Gas for 30 to 40 minutes, but  spray with water before putting the loaves in the oven, and swap round if on separate trays on different shelves after 25 minutes.

This loaf has no dairy, no eggs and very little fat yet it tastes rich and delicious.  Next time I may go up to 50g marmalade as coming across those tender little pieces of peel much softer and tastier than candied peel added a great texture and taste.   Its even given me the idea of next time I make marmalade making a special jar full of peel for baking with, leaving another more or less as a jelly.
Posted by Stasher at 15:06