Another recipe from Mary Berry's Baking Bible.  This recipe caught my eye, and since it does not seem long since we were in Shrewsbury, I thought I would give it a try.

I got my baking sheets out, lined them with baking parchment, and got my cutters and tape measure out of the cupboard.  I took the one which measured 6cm.......

With the butter and sugar creamed, egg yolk, lemon rind, flour and butter, the last thing to add were the currants. 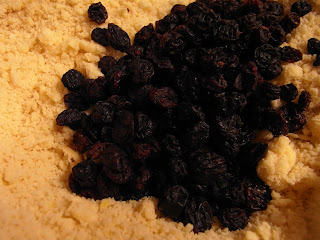 Mary says roll out the dough to a thickness of 5mm.....no I did not use my ruler for this, but its pretty handy that a currant is about this size, so I just let the feel of the currants guide me....then I got cutting.  The biscuits looked a little on the small size, so out the tape measure came again, the size depends on which end one measures the cutter, I had been measuring the smooth size, the cutting edge was narrower, so some biscuits were cut with the larger cutter. 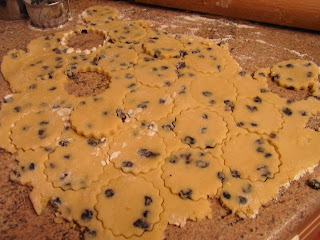 The next instruction is to lightly beat the egg white, with which the biscuits are to be brushed after they have been baking for 8 to 10 minutes.  I wondered just how frothy the egg white had to be.  Some biscuits got the froth and some did not, so there was a variation.  Either way is nice.  The ones with the froth have a certain sparkle about them. 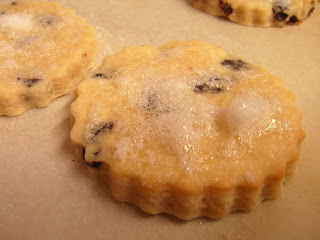 After a further 5 to 8 minutes, a little longer than Mary suggested, which I reckon was because my biscuits got a little cold, as I was a little ponderous with the egg white and sugar sprinkle bit, voila, fresh biscuits. 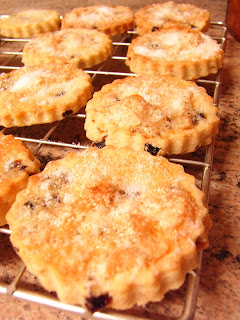 They were lovely fresh, and after three days, Mr S reckoned they were a little like Garibaldi biscuits, still tasty but not crunchy.

When we were little in Mauritius, we were friendly with a family a couple of roads away.  The mother was English, the father Indo Mauritian, and they had a very smart male cook who also dressed up as the Butler to serve dinner.  They had two little girls about our ages, and I do remember that we had home made Garibaldi biscuits there, made by their cook.  It was only when I came to England that I understood that people normally bought Garibaldi biscuits ready made.
Posted by Stasher at 13:54