I have a backlog of two bakes from the Book of Buns, I knew I was going to bake these a week or so ago.  Veronica bought the two bars of dark chocolate required for this, when we popped into the Basingstoke Tesco.

Jane Mason had visited De Oude Bank Bakkery in Stellenbosch, South Africa, and this is a take on their chocolate Sticks.

Her recipe starts with a predough which I allowed to mature for 48 hours so giving the dough a deep satisfying taste, and then on Thursday morning, I made up the dough, kneaded it, but did not read the recipe before planning my day!  You leave the dough to rest in a rolled out oblong on the work surface under cling film for 2 hours.  It ended up being left for nearly 3, but everything worked out very well.  I found it much easier to arrange the dough on a well floured piece of clingfilm, then cover again with film for the last rise before cutting into fingers. 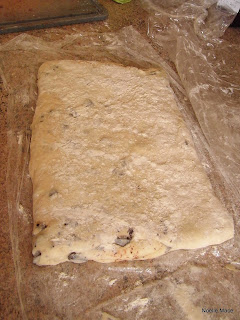 With just around 50g total of butter to paint on the surface, then scatter with chocolate, before folding, turning re-rolling, and repeating a further two times, these are a lot less fatty than pain au chocolat.

I cut 16 short fingers, but they were fairly large when they had risen in the oven.  Next time, I will roll out the rectangle a little longer, and get 20.  I may even roll then thinner, then make longer sticks. The tops are brushed with the standard glaze from the book: an egg beaten with 1 tablespoon water, together with a pinch of salt and a pinch of sugar.  I usually put the remainder, about half, covered in the fridge, and then end up throwing it away, as I am not sure whether it would be off after a day or so.  This time I froze the rest in a little pot, and will bring it out and defrost for my next bake. 'Waste not want not!' 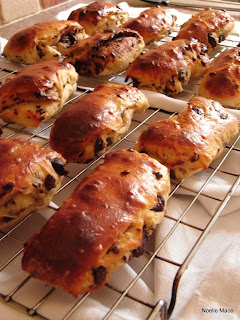 They are non the less really wonderful and fragrant, and very tasty.  I would class them as a sophisticated chocolate treat for any time of the day, but I am looking forward to maybe having one warmed up with coffee and fruit and yogurt for breakfast tomorrow.

This is my 25th bake from 50 recipes, so I am half way.Each is well worth repeating, and I have now baked several twice!  I now only have one more bake and I am bang on target...
Posted by Stasher at 20:43