In a Vase on Monday, May I have the both please?

This week Cathy has been inspired by Old Masters.  This week I have tried to be 'on time', and true to nature want to post Both Vases I have made up this morning.

I know that even when I was small, I just could not make my mind up when faced with choices.  I remember this one, and my mother reminded me often:  gooseberry pie or 'another pie'...my answer was 'May I have the both please?'  I must have been about eight years old, and we were visiting one of my mother's friends in the UK, although I spoke English very well then, my main everyday language was jumping between French and  Creole, and then English when my mother was about.  I think the grown ups must have all had different thoughts. My Mum was probably embarrassed by the lack of manners, my father thinking there's my girl if faced with tasting two puddings which I never had before, why not both, and as these were two older 'posh' ladies I would like to think they they only thought good of me...there was plenty, and really I only wanted half portions of each.  I used to visit a lovely little Italian Restaurant many years ago, where they made marvelous desserts, and the waiters there knew I wanted a little taste of two or three desserts....now restaurants make a real art of 'composing an arrangement of several dessert elements on a plate'

Again I could not decided on which flowers to use.  I tip toed outside in the rain, bucket in hand, and began snipping.  Back inside I chose two vases, both of which had belonged to my mother.  Last week I just put all the blooms into one vase, but today a more simple arrangement came into mind.

The first one is in a 'posh' vase:  Clematis Comtesse de Bouchard, Pittisporum Garnettii, Astrantia Major 'Sunningdale Variegated', and a stem of sedum, still green.  The variegated astrantia is much later flowering in the garden this year, compared to the other pink astrantia which all need cutting back now, and the Lemon Balm called to be picked as I brushed against it as I walked back to the kitchen.  Its form on a closer look is interesting with its whorl of little small flowers, and it has a lovely scent. 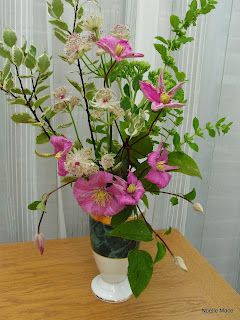 The second one in a little simple vase which my father brought back from Japan in the 1960s.  Here again a sprig of Lemon Balm, some Pink Williams which I have grown for the first time in this garden, my first Dahlia flower of the season, bright pink cosmos, and Achillea Millefolium 'Lilac Beauty'.  I bought the dahlias and cosmos from the gardening club sale, and they were pressed upon me despite the fact that I knew I had little space for them.

Last year the Achillea was smothered in green fly, but it is clear this year.  Usually we have a good balance with many different type of ladybirds foraging the greenfly, but to date I have not spotted a single one.  Instead every flower in the garden seems to have several small beetles almost the size of a pinhead, called Pollen beetles which I have hardly noticed in previous years. 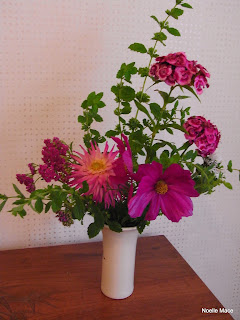 Labels: Garden, Garden Posies, In a Vase on Monday