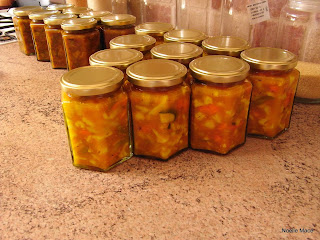 By the end of the day I was really tired, but had been occupied as mainly displacement therapy.  My hero arrived home, smiled, gave me a big hug, rolled up his sleeves, cleared the kitchen and did all the washing up.

Vinegar is one of those smells he really dislikes...so we had our drinks on the patio, in the sunshine, and then we spied butterflies.

I had heard all about butterfly watch on the radio that day, so got out my camera.  Not a clear picture as each time I got close enough it flew off...this was taken from about 3 metres..I read that one of the plants it lays its eggs on apart from nettles is hop, and I have just planted a golden hop just below where I took this picture.  I'm entering the garden for the Kenilworth in Bloom competition, with judges arriving on Monday....don't think it will quite up to standard, more Britain in Bug that Britain in Bloom! 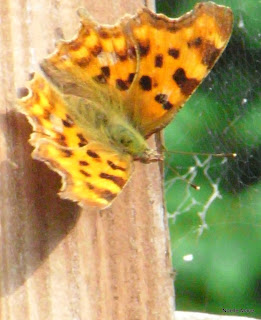 This little hover fly seemed to want to pose.  I was starting to despair at the amount of greenfly and black fly in the garden, and just could not justify spraying on account of the number of bumblebees and bees on the flowers.  But suddenly all their predators have arrived and all will be well. 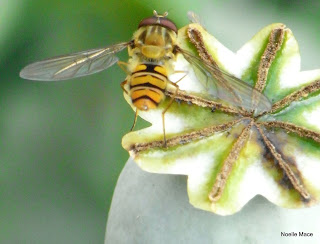 Earlier this week, through the conservatory window I watched a ladybird larvae munch through a whole of lot of black fly just on the other side of the glass.  I knew I had some black fly on some succulents on the other side of the garden, so went to pick it up and take it across.  On the plant it went for the black fly, but suddenly some ants arrived and fended it off, about three ants ganged up, and the poor larvae dropped to the ground, but very quickly made off under its own steam for some other greenery.  So even the black fly and green fly provide food for other insects...for the moment I shall just watch and marvel...except for the Rose Saw fly which I attack with my fingers.
Posted by Stasher at 07:45