Yesterday was a bit of a disaster, I cut my finger of the edge of a corn beef tin.  My middle finger of the right hand, the one you put a thimble on, the one which is really useful when you are knitting.  How did I do it?  Well... we now keep all our clean recycling in a big swing bin in the utility room, and I just delved in to find a small pot to put my waste oil in to put in the bin, without looking too carefully, and key presto, a cut nearly to the bone...so much blood, and so difficult to open a plaster!  Lesson: put all cut edged tins in the outside recycling straight away!

Before that I had failed to separate three eggs properly, and hence scrambled egg for breakfast this morning.  Thankfully I always separate each egg in a small bowl before putting them into the main whisking bowl.  With 6 eggs to separate I did have a bad day, but thankfully had enough eggs spare to make this gluten free cake from the National Trust Simply Baking by Sybil Kapoor. 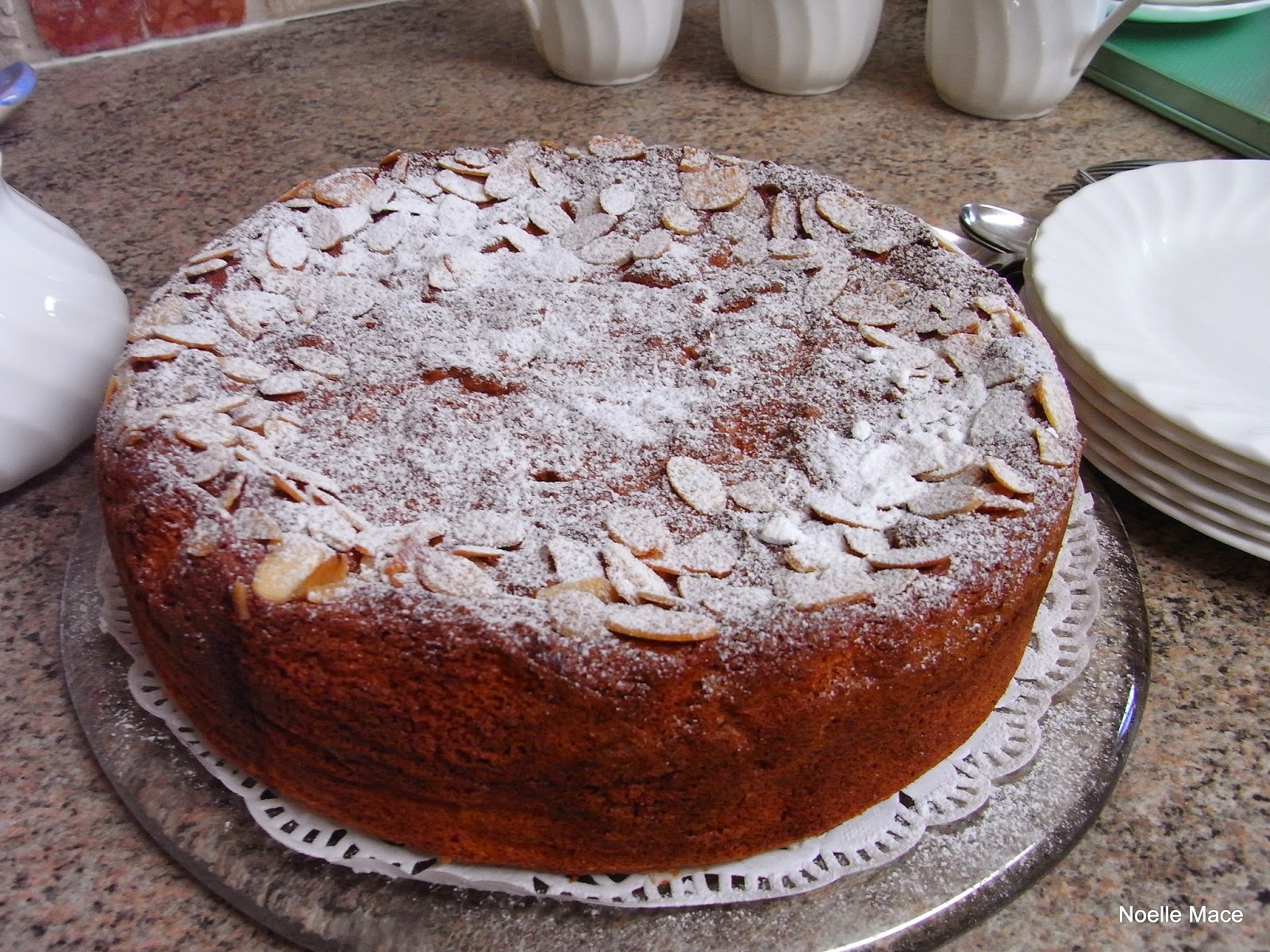 In principle I felt it was a good recipe and was to be the first of the gluten free bakes yesterday, before the cut finger put paid to further baking!  Today a few knitting friends:  Linda, Janice, Roni, Katherine, and Diane,  came round and I love to have all the bakes suitable for all of us, but we had to be satisfied with just one cake.  By the end of the morning, we had all enjoyed the cake, coffee, tea etc., and had mastered some of the techniques on the Maluka Scarf which I am cascading down!  Roni brought a project which she has nearly finished, and which will be the basis of a new group workshop hopefully.

The only question I had when I read the recipe for the Orange Almond Cake, was whether one cake really needed 4 teaspoons baking powder.  I don't really like that taste of baking powder.  I had already cooked the fruit in the pressure cooker, but found one recipe which just cut up the whole fruit into bits and poached them in a pan.  So much easier than the 2 hours or so if you did not have a pressure cooker.  As usual I did some further research and found several recipes on line which used only one or two teaspoons of baking powder.

Don't worry if you are not going to make the cake, all I want to note, is that I think I must have used every mixing bowl, and thank goodness I had washed up before the encounter with the corned beef tin!
Here is the revised and altered recipe to Serve 10 to 12 portions.

For a 23 cm spring from tin, with bottom and sides lined with baking parchment to 2 cm higher than the tin.

A little icing sugar to sieve over the cooled cake just before serving.

Poach the oranges, cut up in a little water, till very tender.    Watch and add a little water if required, but not too much, as when the fruit is drained, you will need to reduce the liquid to a couple of tablespoons.  Or use the pressure cooker. Whiz the fruit and liquid together, and leave to cool.  When cool mix in the almonds and baking powder.

I chose to vary the technique to incorporate as much air as possible, in that I whisked up the whites, first in my second biggest bowl,  using half of the sugar, adding a spoonful at a time till used up, then whisked for a further minutes or so.

In a separate but larger bowl, whisk up the eggs yolks with the other half of the sugar till the thick ribbon stage.

Now fold in about a quarter of egg white mixture into the egg yolk, fruit and almond mixture, then when a little 'slacker', the rest of the egg white mixture can be folded in very gently to keep in as much air as possible.

Gently fill the cake tin, smoothing the surface, then scatter over some flaked almonds.

Cover the cake with a piece of baking parchment with a hole the size of a large coin in the middle, and transfer it to the oven quickly.  After 45 minutes in the oven, check the cake, if very pale remove the top paper and cook for a little longer.  To test if the cake is ready check with a skewer.  It may take up to an hour to cook through depending on the oven.

Cool in the tin, but on a cooling rack.  When cold, remove from the tin to a severing dish.  Dust with a little sieved icing sugar.  This cake is best stored in the fridge, but allow the cake to come to room temperature for the best flavour.

You could make smaller cakes but the baking time will alter of course, and I suggest lowering the oven temperature.

It was delicious and very light, and if we had this with a little goat's cream, as I ran out of time to fetch some cow's cream for the girls.  If serving for a dessert, I would serve with mascarpone and some orange curd.  It is even better the next day!