New Plants in the Garden 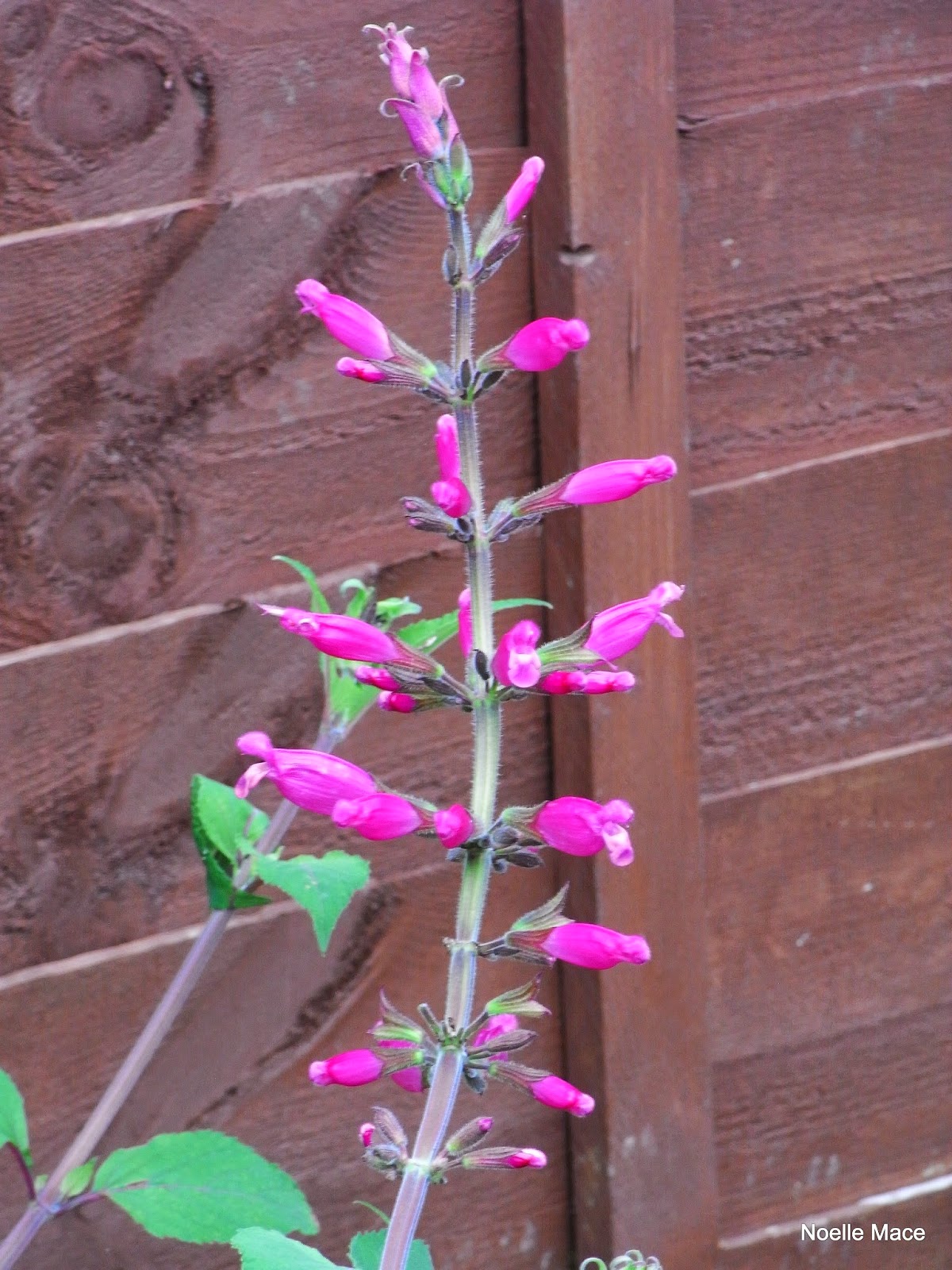 Bought as a small rooted cutting earlier this year, the Salvia Involucrata Bethellii is adding a touch of the bright exotic to the late autumn garden.  I have just read that it is not very hardy.  As I have no greenhouse, it will have to take its chances, but I may get some horticultural fleece to swathe it with.

I have finally dug up some large old plants which I have been starting to 'resent'.  They are gone and I am pleased with the gaps left, so I shall be thinking about what new types of plants I want to grow. 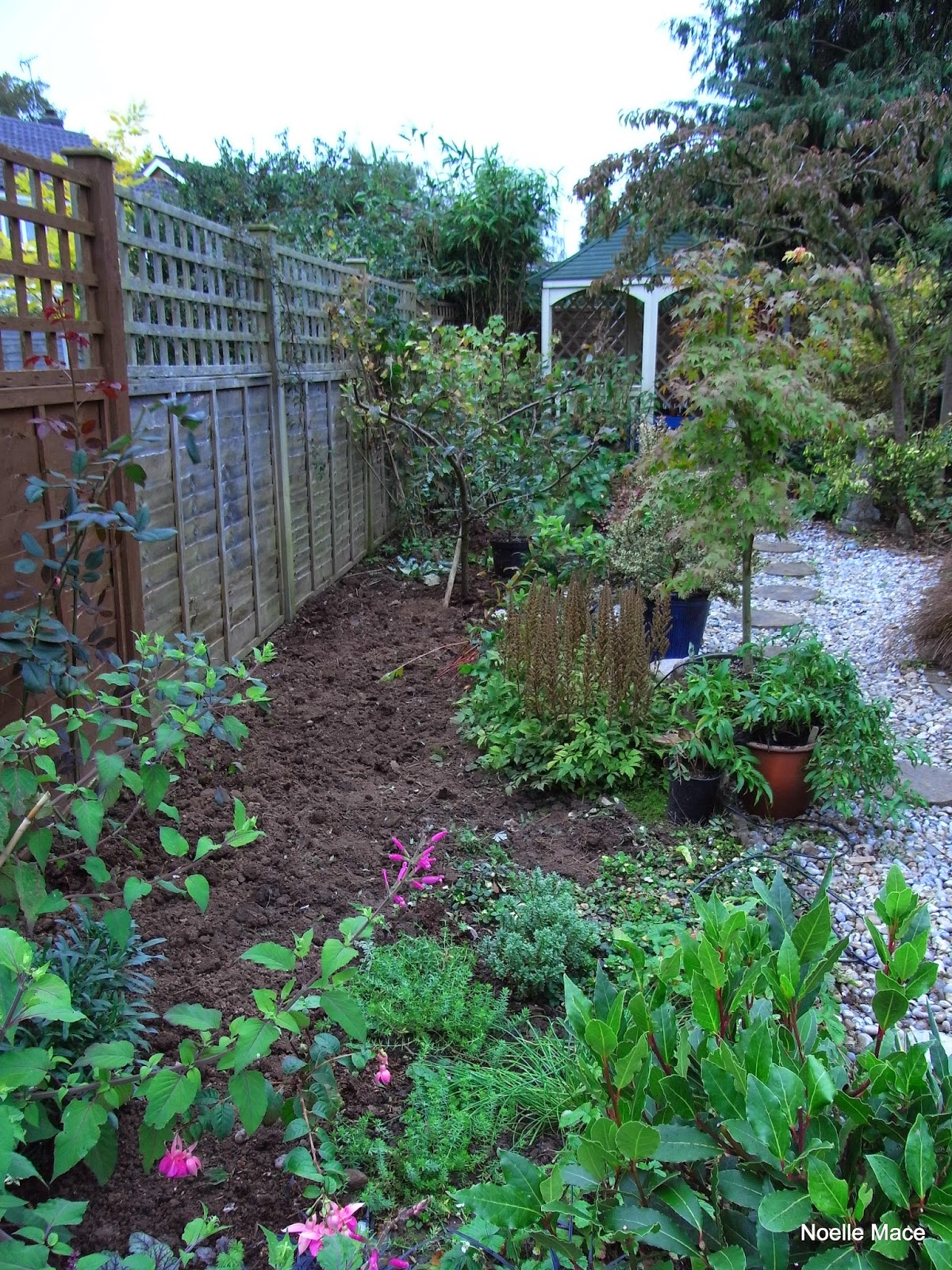 I have been having Fothergilla envy for about five years, and have decided that life is too short, so have acquired one for myself.  Every few weeks I visit my 'Honey Man' in Kenilworth to collect several jars, and always enjoy and admire Pat's garden.  She has many large tubs arranged around her courtyard garden, and her Fothergilla usually stands out in Spring and in Autumn, in Winter the wood has an attractive upright shape.  After doing my research I found one I wanted, not too vigorous with blue green leaves during the summer, which would look lovely in one of my tubs.

I found a nursery growing Fothergilla Gardenii Blue Mist through the RHS plantfinder on line. 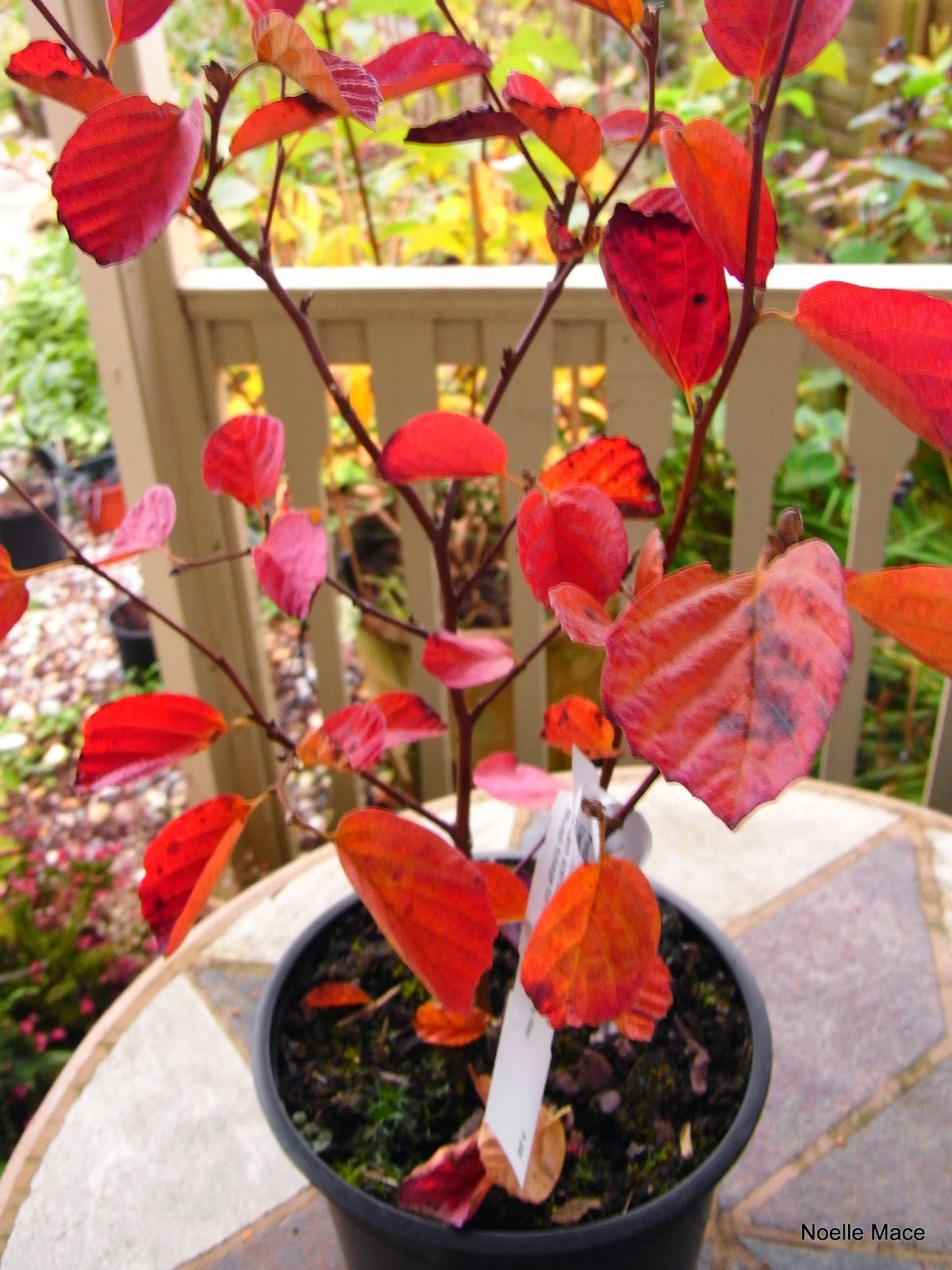 The nursery is some way away, but not so far, that I could not drive there on my own.  At first I thought a gardening friend come be able to come, but Trish had a big show on the following day.  I had scanned Chris Pattison's website, and had added further plants to my list.  After several wet and inclement days, Friday turned out the perfect day for a drive along country roads.  The hedges near the nursery were woven with old man's beard, and the autumn colours were coming through.

There were several customers and with only Chris there, I felt pleased to be left walking along the paths and poly tunnels looking at shrubs which I had listed or which just caught my eye.  You can see almost every stage of plants growing, from small cuttings to beautiful large specimens, ready to be planted in some large estate garden.  When I did have Chris's help, I felt that I was being guided and advised by a very knowledgeable plants person.  I agreed that a couple of my choices, given the information that Chris gave me, were best dropped.  If I went again I would take some wellies, as the paths were a little difficult to walk along in shoes as the water from several rainstorms over the week had not drained completely away.

There were trolleys of little cyclamen being germinated.  Chris and I had an interesting talk about their journey plant collecting in Europe last year, and our joint love of cyclamen.  Next time I wish to germinate cyclamen, I shall adopt his method....until now, I have just spread the seed along my stone garden and hoped for the best. 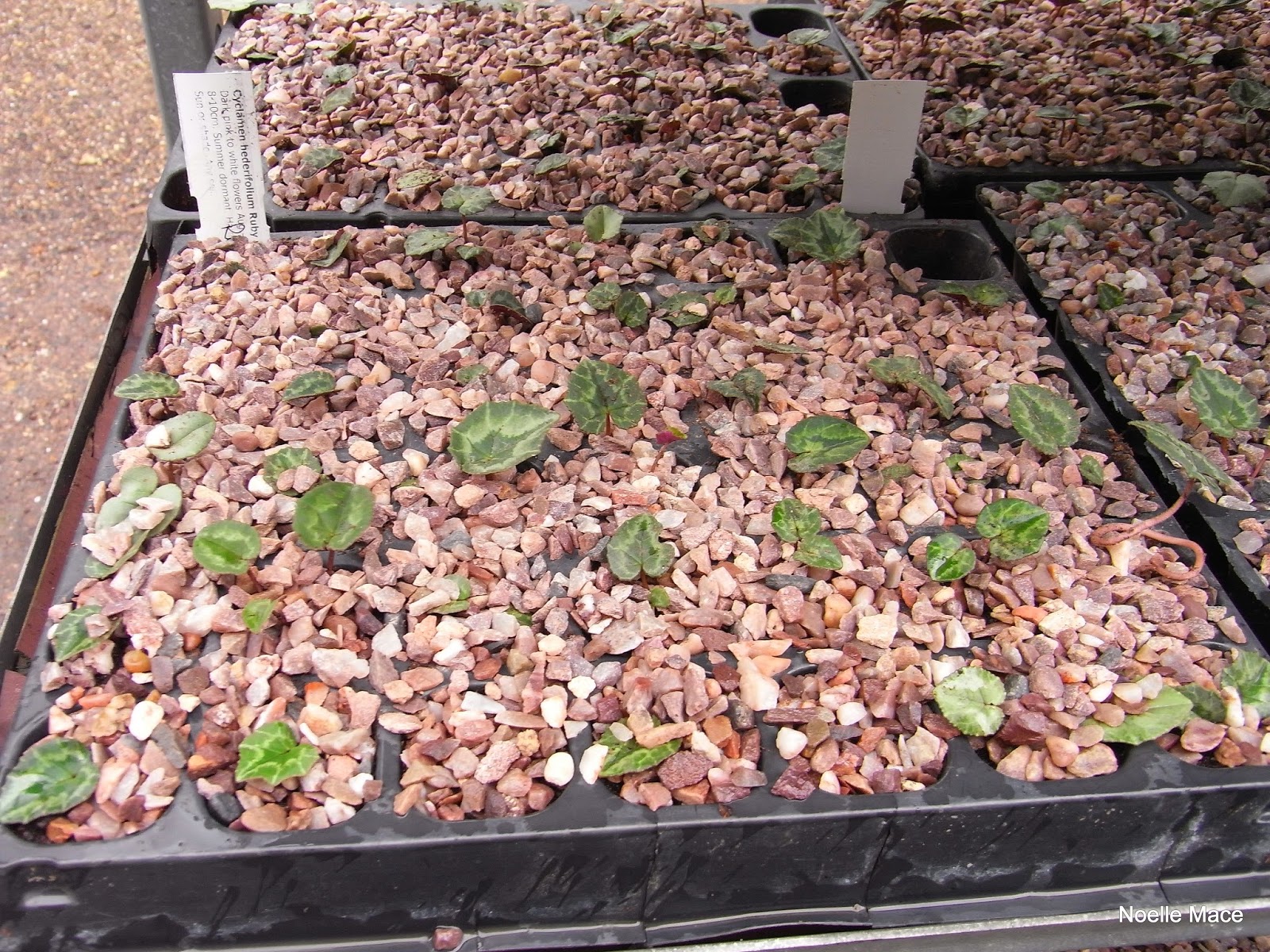 I couldn't resist this little beauty, and was not surprised that it is related to the Grevillea Canberra Gem which I acquired earlier this year.  It is Grevillea Lanigera Prostata.  It is compact with almost succulent type leaves, rather than the spiky sharp leaves of the Grevillea Canberra Gem.  The  plant is in full flower, and likely to continue thus until the spring.  I have it just outside the conservatory where I can admire the blooms, and I hope it will be happy with the protection of the wall, though I shall bring it in should the weather turn very cold. 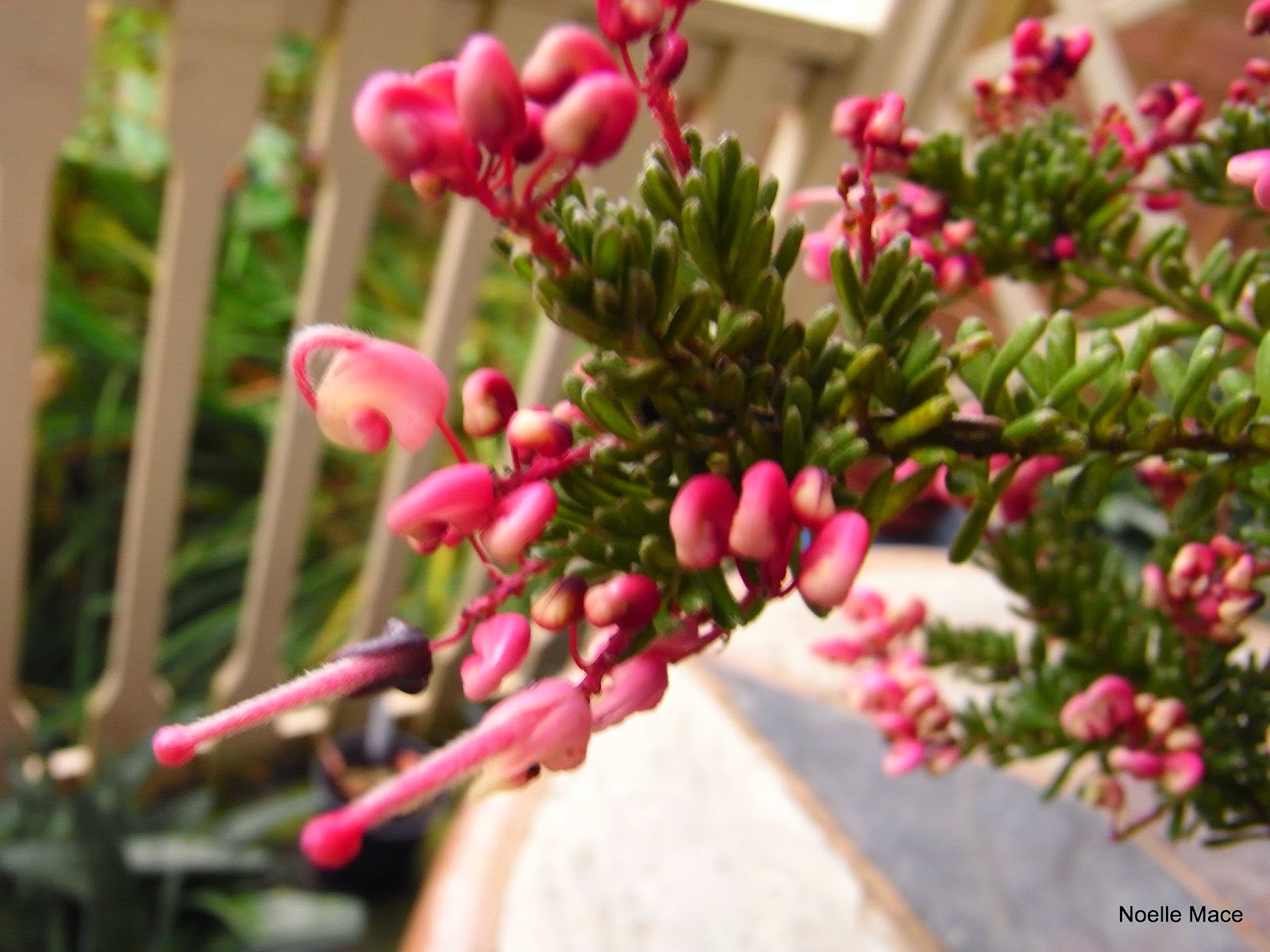 To plant in the shade by the gazebo, a shrub with a heady scent Sarcococca Confusa, a sweet box to scent the garden in early spring. 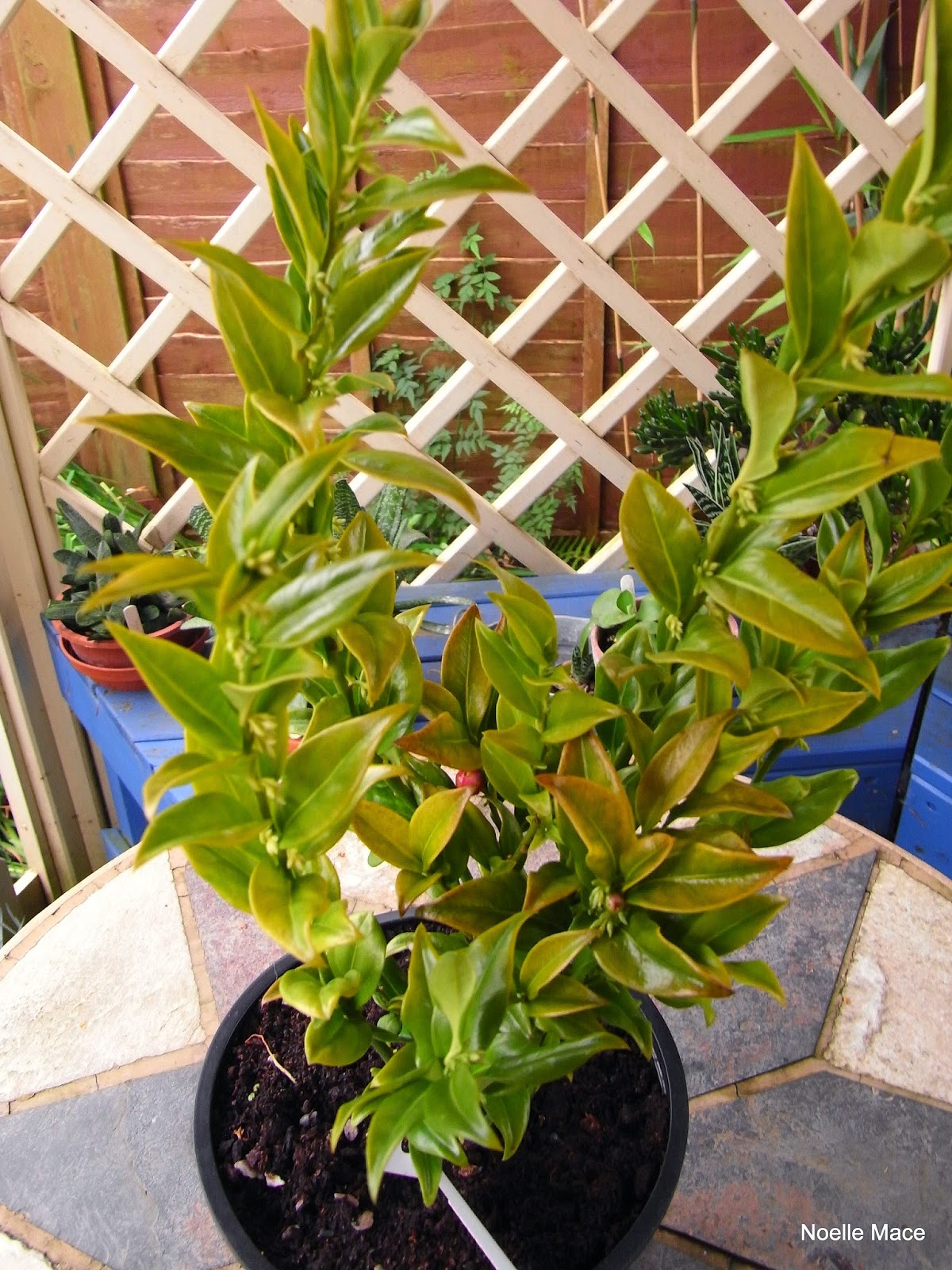 and another one for Summer Scent, the single flowered Philadelphus Belle Etoile. 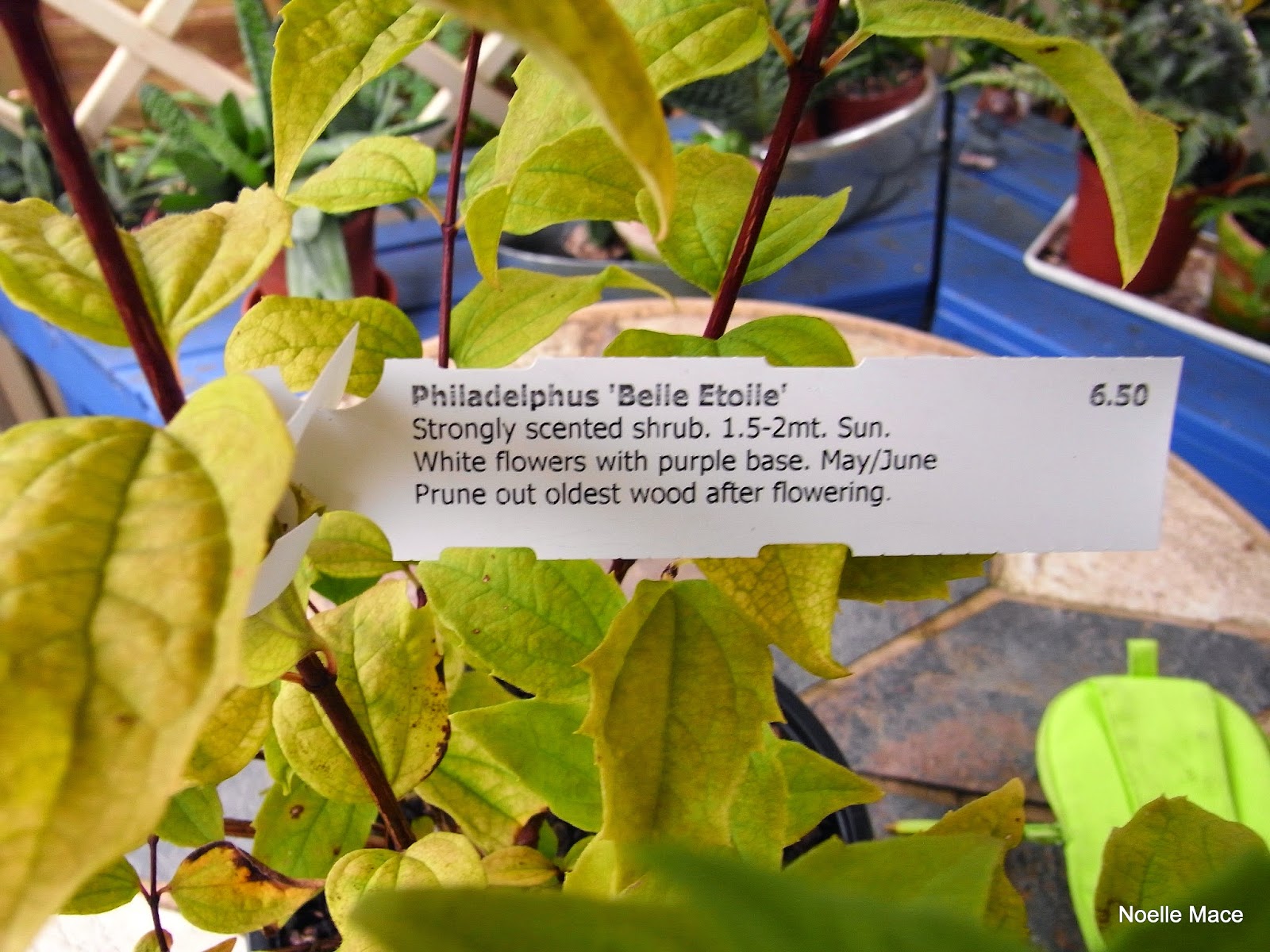 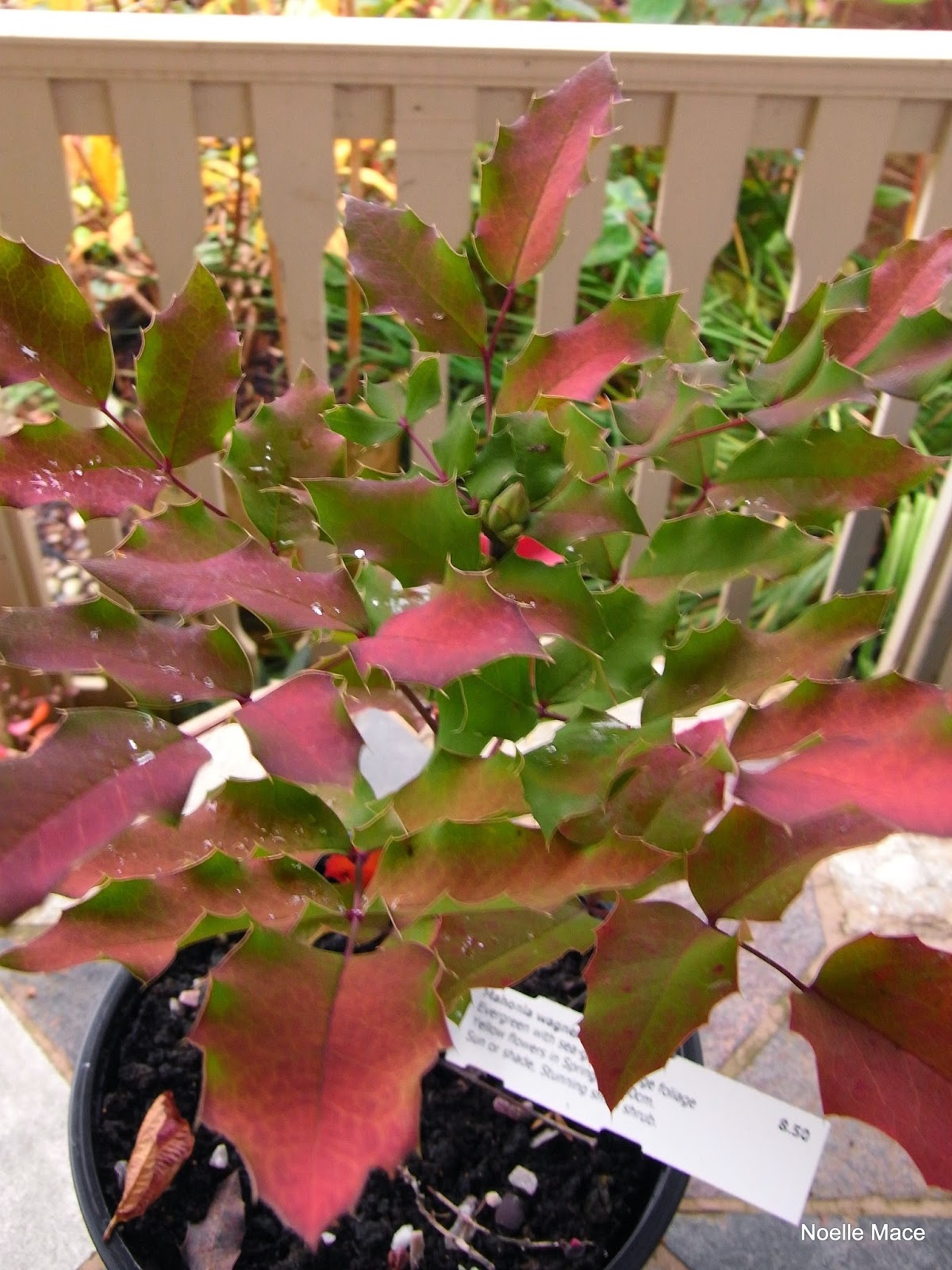 this is what I read about this plant:

Mahonia x wagneri `Moseri', a hybrid from aquifolium stock that has an amazing repertoire of leaf colour. It is as though it has been programmed to play a slow-release version of autumn effects all year. `Moseri' is yellow in spring, turns coral in summer and darkens to cock's-comb red as other leaves start to fall. This is a connoisseur's plant and it is hard to find because it is not easy to propagate.

Of course I had to get a fern, which I think will add that special something to my posies. 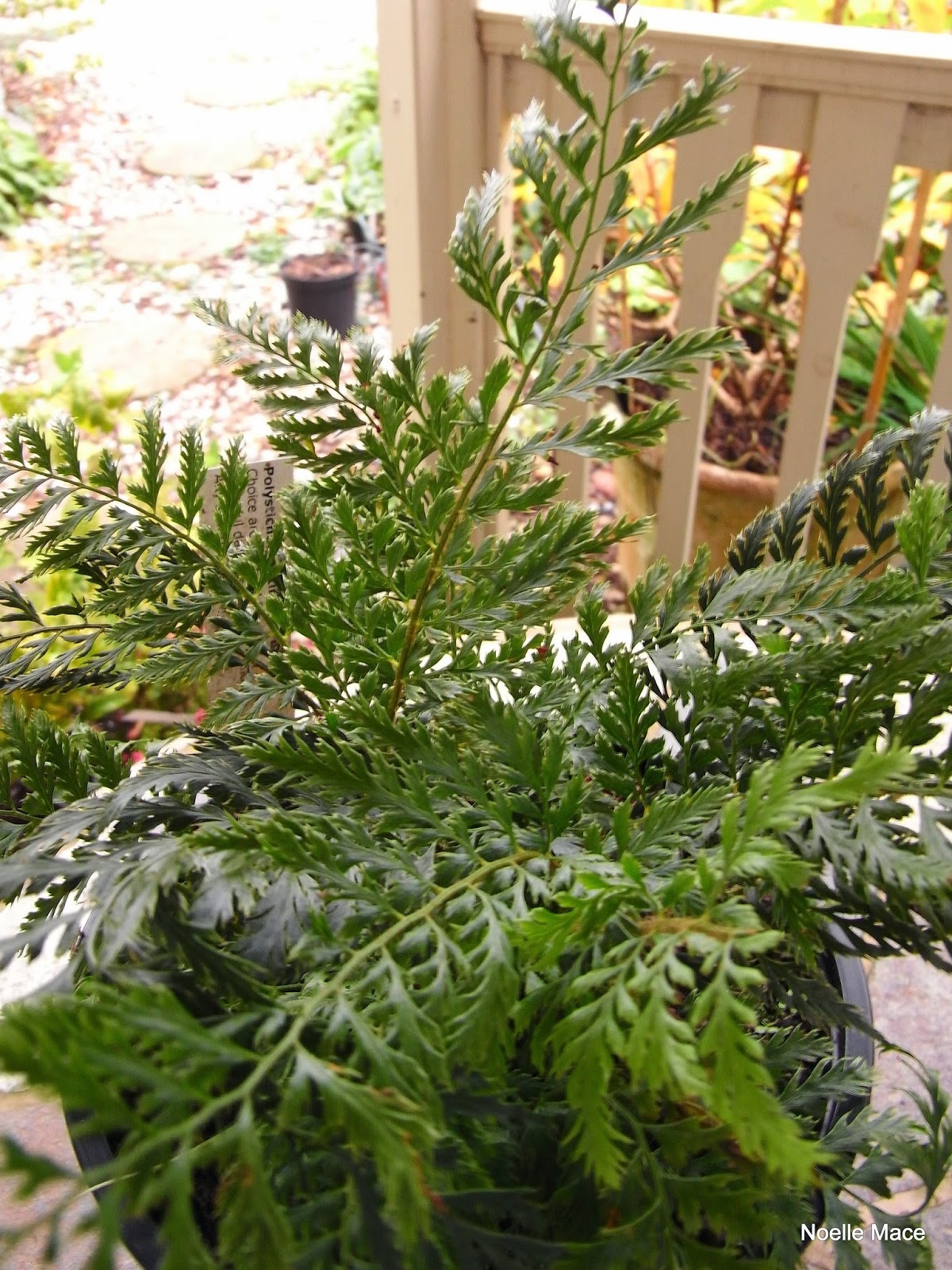 Polystichum Setiferum 'Bevis'
Finally the last plant which caught my eye from afar due to its light airy nature, was this little beauty, 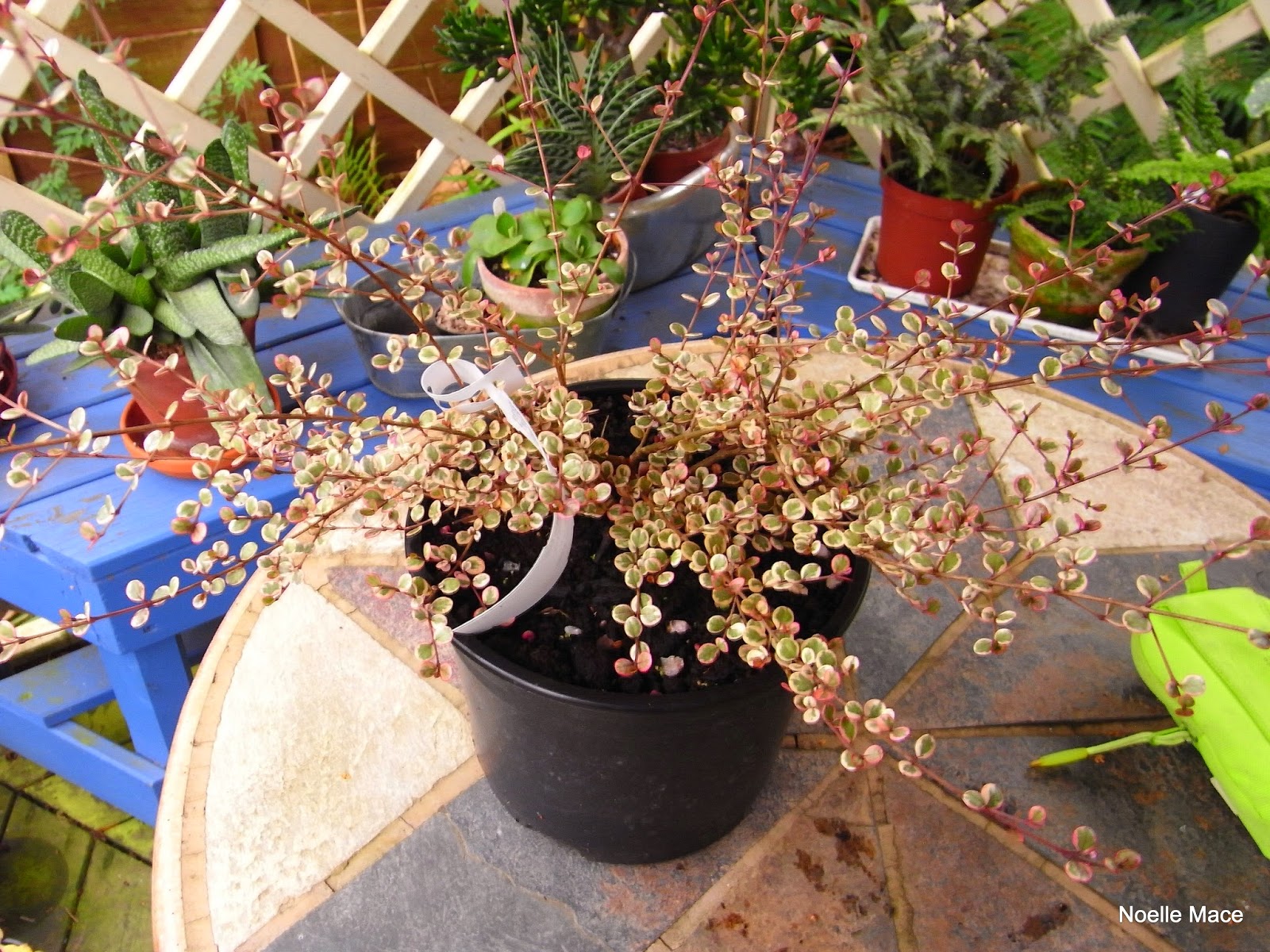 It was un named in the bank of plants, and there were only two I think.  When Chris printed out a new label for it, I recognised the 'myrtus' part.  This Lophomyrtus x ralphii 'Little Star', is now the third plant from the Myrtle group in my garden.  I shall have to coset this one too!

So Christmas has come early, these are my presents to myself for 2014.  Well we have seen the first of the Street Christmas decorations up in Birmingham this Sunday!
Posted by Stasher at 13:56